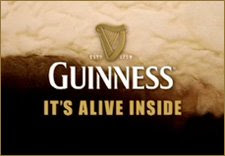 Icon O Classt... this is your cue
jump in here... give the review of this product
give an explanation of pulling a draft
why a beer is better from a tap than from a bottle?

how were the draughts in scottland?

what does it mean to pull a draught?

I had two of these rocket widget assisted guinness bottles before moving to the flying dog amber
no... not harp... flying dog
the first bottle I mistakenly poured into a pint glass
the visual was stunning as to be expected
but the beer fell flat quickly
the second guinness was drank from the bottle
as the bottle instructs
but I like the ascetic

enjoying the gates on hbo
I am loving it
fantastic film
fantastic vision of the artist
which one?
all of them

Well, in general, keg beer is fresher, and this is likely the reason many people consider it “better” than bottled or canned beer. Keg beer is shipped cold and (assuming the bar treats it right) kept cold. Then there’s the issue of turnover. Keg beer typically is consumed within one to two weeks, and doesn’t sit on a shelf for months suffering the vicissitudes of the prevailing conditions (light, heat). Finally, kegged beer doesn’t undergo pasteurization, as do some of the best-selling dreck that is the lust-dream of so many unimaginative fratboys (okay, yes, there’s the element of price to be considered).

Keep in mind, though, that many bottled craft beers are “bottle-conditioned”--meaning they develop carbonation and some flavoring after they are bottled, because a small amount of yeast is present and active in suspension. While it does those nice things, this yeast deposit also acts to protect the beer a bit from the variable of age (some beers—stored properly—improve in taste with age in part because of the yeast’s action), but won’t do much for excessive heat (which can kill the yeast) or light. Bottle-conditioned beers aren’t pasteurized, either. So, assuming a bottle-conditioned beer is brewed right, shipped cold, kept cold, and stored away from light, it may be hard to tell any quality difference between it and kegged beer.

Ha, St. Patrick’s Day—didn’t drink a single alcoholic beverage. It you’d had the sort of night I had at UVA on Saturday, you might not want to look at a beer for a couple days, either. And no Joyce, either, though that was more likely. A little Paul Virilio was all I could muster.

As for Guinness, I think it’s better in a can. The widget just doesn’t seem to do its thing in the bottle. Don’t ask me why—it should. The ball is loaded with nitrogen gas, pierced, then sealed under pressure in the can/bottle so that the gas remains in the ball until you pop the top, at which point the gas is released into the stout, all in an effort to mimic the draught-pour experience. I’ve had too much Guinness in my life to continue to appreciate it.

As for the draughts in Scotland, well, we finally found some really good local stuff on the last day; everywhere else seemed to delight in serving up Tennents, which is the Scot's wildly successful attempt at emulating Budweiser.

Pulling a draught likely originated in reference to how "real ales" are served. These ales (aka cask-conditioned ales) are served cool, not cold (some call them warm), are not force-carbonated (some call them flat), and typically rely on a combination of gravity and the 'keeps biceps to deliver them to the glass, via a "beer engine". In the old days, beer engines were manual, and some places still use this "old skool" technology. Real ales are huge in England and are catching on here in the States with beer afficionados.