Dean gets some props in his school paper for his Unicycle Skills... what about 40 Mile MoCo Epic on a rigid Single Speed? 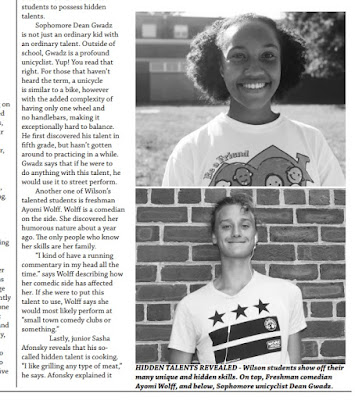 Facebook Posts will not save the bees... but action will! 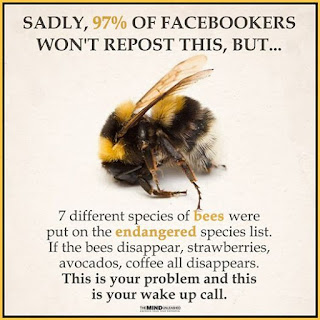 I am no scientist
but it seems simple enough
increase the bee habitat and STOP BEE KILLING PESTICIDES!
do your part

bummer... I missed the invite only REI Flagship opening... I had the invite... but I did not have the time... bummer

I need some gear and could use the discount
Posted by gwadzilla at 10/19/2016 No comments: Barking Dogs... I was going to throw this on Nextdoor DC... but instead I hide it here

Yesterday my neighbor's dog was barking...
not my immediate neighbor
but a neighbor a few houses down... their back yard not far from my back yard
the dog was not just barking yesterday... the dog barks all the time
barking at nothing... just barking... barking non-stop

I have a dog... my dog barks.. dogs bark
but... my dog does not bark excessively... if I feel that my dog's barking is excessive- I bring him in and or issue a command for him to stop..
my dogs barking is usually him doing his job... defending the house

so...
after the neighbor's barking dog gave me a pounding headache preventing me from enjoying a Sunday afternoon at home watching the Redskins win
the dog barked through the whole game... no matter if the momentum favored the Redskins or the Eagles

so... when I left out to walk my dog in  the afternoon I thought I would kindly ask my neighbor to do something about the barking dog

what was I thinking?

well...
things do not always go as planned
I should have anticipated that my "telling someone what to do" would not go well
I know that NO ONE likes being told what to do,,, even if they are in the wrong

the dog barked as I tried to engage the woman on the other side of a storm door... my head pounded as the dog continued to bark...
I introduced myself... the woman was less than welcoming from words "Hello I am your neighbor around the corner on Quackenbos"
her body language was negative and she was less than receptive to a large bearded man with a dog on her front porch

my dog stood quietly at my side the whole time
behaving... not barking.. not jumping around... not pulling... just behaving

it did not go well...
since she did not speak
I answered the questions I expected to be posed with

all words fell on deaf ears

well...
yes... the woman yelled at me
she threatened me with calling the police
I was initially fine with that concept
but knowing how interactions can go with the police... even for the innocent... I let that threat chase me away
all the while the dog was in the back yard barking away... oblivious to everything except the wind

wow... things did not go as planned
I guess I expeced the person in the wrong to be less agressive and more apologetic
she was quick to threaten to call the police
funny... it never occurred to me that I should call the police or the SPCA\Animal Control
well it occurred to me... but I am not looking to harass this woman.. I just want the dog to stop barking

The MoCo Epic is Epic! Rode the 40 Miler on Single Speeds with my 15 year old son Dean... DEAN ROCKED IT! RIGID TOO! 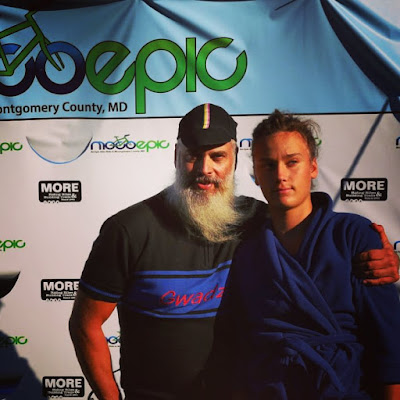 these photos from the MoCo Epic Photo Booth
https://sideaphotography.smugmug.com/Event-Galleries/MoCo-Epic/i-h52mDdr

WOW!
what a day... what a glorious day!
a great day to be on the bike in the woods
the MoCo Epic Delivered

as the MoCo Epic approached I looked at my life and I wondered... can I make this happen?
if I can make it happen

what distance?
with who or whom?

as it turns out my boys were both free on the Sunday that this event was scheduled
so I tried to figure how I could do this event with both of my boys
well...
riding with 12 year old Grant and 15 year old Dean has never been an easy balancing act
one child is forced to go faster and harder than they would like
while the other has to ride slower and less intense than they would like

Grant bowed out... I wanted him involved
but had to accept it would be easier to ride with Dean and give Grant a "pass"
considered trying to get Grant to tag along with another father\son duo... but really... that is too much to ask of another parent

so it was decided...
Dean and I would ride single speeds at the MoCo Epic
but what distance?
what distance would be most practical?

over the years my pig headed-ness has tended to opt for the longest distance
but this year... I decided to try a different option
it made sense to chased down the 40 miler...
as it was said that the 40 miler has the greatest percentage of single track\the least percentage of road riding to get from trail head to trail head

so it was decided...
MoCo 40 Miler would be out objective
as it would turn out
the 40 Miler was ALL CANDY! 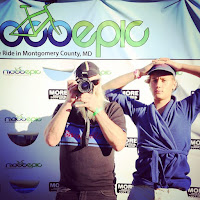 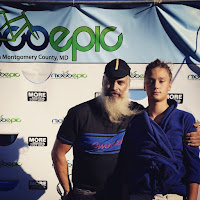 but the weather...
weather was brewing
hurricane coming up the coast
how would this weather effect our day

ah... how fortunate we are
that we can opt to spend several hundred dollars to ride our several thousand dollar bikes in the woods
our anxiety about a hurricane was not worry for health or well being
but worry about whether or not we would be able to enduldge ourselves with our two wheeled hobby

as I rode on this day... I prayed not only for the safety of myself and my son
but also for all those in Haiti and other areas where the hurricane has brought death and destruction
I also gave thanks for the lives we lead
the world we were born into and the experiences that our fortunate placement in the world allows 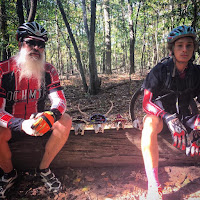 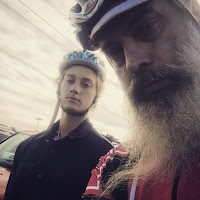 Dean and I got a late start on the day
we arrived and registered... getting on the bike just before the closing of our group's release
our start may have been close to 10:30

another thing that makes this event so great
AID STATIONS!
riders can push themselves a greater than normal distance with the aid stations offering fuel along the way
I could not imagine bringing that much food in a Camel Back!

DEAN KILLED IT!
Dean rocked the course on his rigid single speed... his Salsa Juan Solo with its carbon fork and its 29 inch wheel in the front and 26 inch wheel in the back
I set the pace and Dean chased in my shadow

it was all smiles
I felt the threat of cramping... but cramping never happened
we marched some of the steeper hills to avoid an excess of pain and the risk of a broken chain
we rode without incident
no crashes... no mechanical failures... and no human body failures

it was a blast to share this day with my son

good times for sure 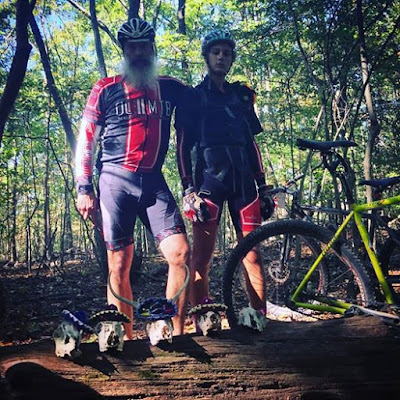 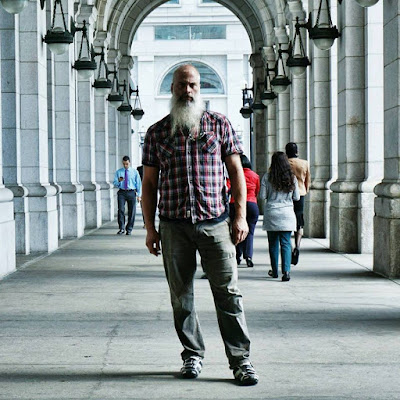 Gwadzilla on Instagram
photo of Gwadzilla of Kevin Dillard 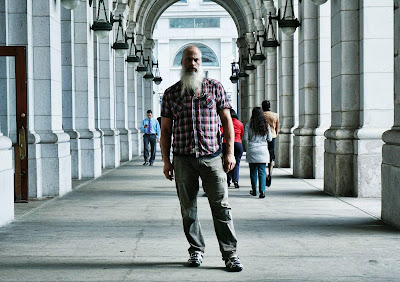 yesterday as I was driving across town to pick my boys up from their mother's I saw a garbage truck driver on the phone... he was yammering on about something important as he drove his vehicle death and distruction aggressively down Georgia Avenue...
stuck at a light he yammered on
at the corner a police officer waved to him
he waved back... never stopping his ever so important phone call
I yelled to the officer... "maybe you should tell your friend to get off the phone when he drives rather than saying hello"
that was not well recieved
but I just thought I could try to pry the blind eye open 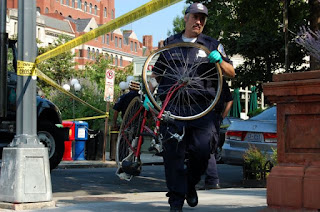 my kids rode their bikes to school today... people suck... people in cars really suck... World, watch over my children. 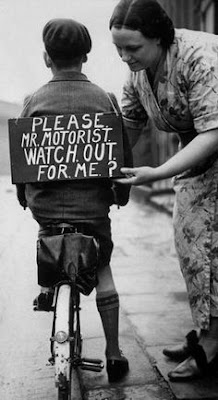 I can ask my boys to be careful
but sadly
a person on the bike can be in the right and still get hit
car drivers suck
I know... because I see you everyday

Bikes to the World... MOVING SALE!