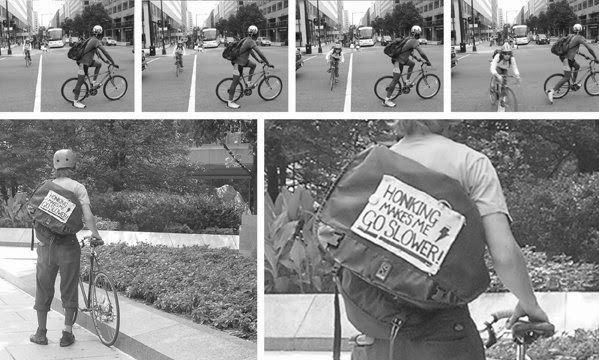 the horn is for three things...
to give a friendly hello, to avert danger, and to assert that you are an asshole

so often I am walking my dog and my reflective state is disrupted by someone leaning on the horn
because when people use the horn... they really use the horn
it is like cussing
we do not normally just utter one piece of profanity... we usually open the flood gates and unleash a fury of explatives

on a few occasions I was honked at this morning
it was not a close call
my behavior was not obstructing anyone's path
in each case I had not made the green so I pushed through the intersection when it was yellow, maybe orange, maybe red

and well...
that is where it happened
in each case a car was speeding hectically off the line
as if the Christmas Tree had turn Green and they were trying to set the land speed record
which is the irony of it all...

speeding cars so often honk at jay walking pedestrians or red light running bikes
?
go figure
as if they are more entitled to the space than anyone else
no self reflection... just a selfishness compounded by a bully behavior
PEDAL TO THE METAL
LEANING ON THE HORN
BRAKING FOR NOTHING OR NO ONE

yes... when someone uses their horn it often deflects who is the asshole
someone may be doing a sleepy three point turn that blocks traffic
that is inconsiderate... but when the person makes the point of telling that person that they slowed them down by leaning on the horn
the asshole in the situation moves from one party to another

use your horn sparingly
be respectful of others
your horn is not so loud to you.. but to the people around you
well... it is loud and obnoxious

and to the people who feel that they are more in the right about breaking the law by speeding and putting others at risk
well... I bet that same person jaywalks and rolls through stop signs on their bike... if they every ride their bike
be a little more empathatic