Back from Snowshoe!
Race Reports and anecdotes to come, first I have to let the dust settle, or in this case let the mud dry before the event is clear in my head.

In short....
It was a classic Granny Gear Snowshoe event...
Well put together with no control over what Mother Nature has to deliver. Seems that Laird Knight may have pissed her off some time ago as she has rained on 10 of is 13 West Virginia 24 hour events in the past 13 years. Although it did not race during the race time itself, it did rain violently the Thursday before the Saturday noon time race start. This year I left my class of choice, Clydesdale, to race with my brother's Vet team (men 35+). It was a good group of guys; my brother marc, former City Bikes team captain and team founder Brian Kemler, the British Brain Dave Wotton, and myself. A good mixture of different personalities with very similar finishing times. The race was hard, there was a mixture of technical riding, long climbs, and long hike-a-bike sections. Too much hike-a-bike for anyone's tastes....deep mud....slick roots...and boulder size rocks....almost dangerous to move through on foot while carrying the bike. Each person independently said to themselves during their night laps that they would not be doing this race again. As for me, I was crossing my fingers that this race would not be held here again as I feared that I would race it out of some strange fear that I would feel like I was "pussing out!"

Check out the Results!
My Team's Results! Complete with laptimes etc.
We managed to get Third in Men's Vet and 17th overall. A finish that I was very pleased with. The winning Men's Vet team was also the top finishing team overall! Their efforts were nothing shy of impressive, yet perhaps not as impressive as the Solo Riders

The Clydesdale field was small....part of me was sad that I was not part of the Clydesdale competition....but I enjoyed racing with my brother's vet team more than I would have enjoyed 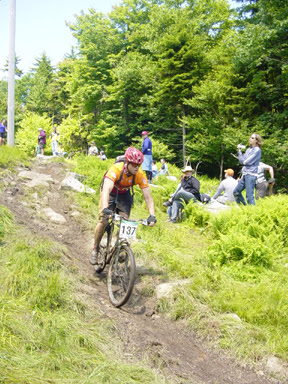 Laird Knight's bio in the Mountainbike Hall of Fame
there is no question that this man deserves some great credit for his contribution to the sport of mountainbiking
after my first Canaan many years ago the 24 Hour race format became part of my yearly objective, most other races had no appeal to me
Since that first Canaan I have also raced at Granny Gear 24 Hour events at Donner pass, Moab, the first Snowshoe event and now the last Snowshoe event
and if things go as planned
I will race next season at the new West Virginia venue and perhaps make a trip to the west coast venues again in the future!
Posted by gwadzilla at 6/28/2004