Red Bean Rest in Peace
Last night, the eve of Ash Wednesday was the New Orleans style celebration of Fat Tuesday the last night of Mardi Gras!
So after a night of children and bikes I decided I would march up to the main street in Mount Pleasant and get myself a very very late night dinner. As I walked up Park Road I debated between having dinner at The Red Bean or at Tonic. As I got closer to the Mount Pleasant building I questioned in my mind whether or not The Red Bean was still open. Once in front of the 7-11 I could see the lights were off and a CLOSED sign hung in The Red Bean window... The rumors were true. The Red Bean was no more. The neighborhood bar with a New Orleans theme was not able to tred water long enough for its signature holiday, Fat Tuesday.

The closing of the Red Bean did not shock me.
In many ways I had expected it..... perhaps I had even expected it sooner..... I had even been shocked that things had gotten as far as they did. As a matter of fact.... after going there several times.... I thought that things were moving along in a positive and permanent direction. In my mind I thought that they were striving too hard to be a bar and not a restaurant, but that is their choice. There were weekly chronicals of the life of co-owner Frank Connell in the glossy insert Washington Post Magazine that landed on my door step each Sunday morning. (episode one) I read these artices, I ate at the resturant, I watched from afar.

Last night as I waited for my dinner to be cooked up at TONIC I went ahead and sketched up a little Blog Note.... 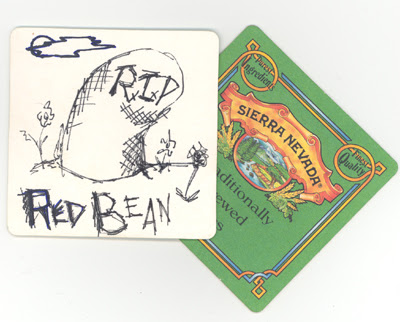 Here are the complete archives of the ADVENTURES OF FRANK...

If I sound unsympathetic....
well....
we have all taken some hard hits in life
lessons hard learned
I was pulling for Frank and his co-owner Cousin Mike.
I feel for them for all the time and money that they put forward to try and create something good for the neighborhood.

this is the second effort to create this post
the first attempt was a better production
right now I have one eye on the clock and another eye on the door.....

need to check with lisa about her Yoga plans for tonight