Skip to main content
The Circus is in Town! this weekend past I took my son Dean and my brother's eldest son Eric to the circus

at this point I have no boycott of either the zoo or the circus
as a matter of fact I am a regular at the zoo and I am an anual attender (is that a word?... attender... not attendant?) of the circus... more specifically The Ringling Brothers and Barnum & Bailey Circus

the circus is a wonderful part of child's youth
the animals... the clowns... the MAGIC or it all
it is really quite spectacular... all the lights... all the sounds....
all the overly priced junk at the consession stands!
the circus has always had a bit of the medicine show swindler side of things... some things never change
six dollar popcorn
nine dollar cotton candy... was that 9 dollar cotton candy!?!??!
sure it comes with a mask or a hat... I don't want the mask or the hat.... I want cotton candy
I want sticky fingers and a quick sugar buzz!
whipped sugar with colored dye.... give it to me... and give it to me cheap! for 9 bucks I could rent that dam machine and make my own cotton candy!
the list of over priced food continues on into a long list of overpriced spinners, lights, stuffed animals, and other assorted junk that would most certainly break before getting home
needless to say I wanted it all... but as the adult with the wallet.... I needed to lead by example
let the standard be set.... no junk will be purchased at the concession stands!

Dean and Eric were out of control!
their level of energy had very little to do with the circus
they feed off each other
they both regress into a little balls of energy that are just bouncing off each other and bouncing off the walls
it can be a frustrating experience...
it is vital to keep them in control.... so on this trip I am not there on level playing ground
I am not there as their buddy... I am there as a chaparone.... I am there as a cop


SLOW IT DOWN!
NO... DON'T TOUCH THAT!
BRING IT BACK!
DON'T RUN SO FAR AHEAD
BE CAREFUL NOT TO KICK THE CHAIR IN FRONT OF YOU
NO MORE WRESTLING
BECAREFUL NOT TO RUN INTO ANYONE
STAND IN ONE PLACE ON THE ESCALATOR
HOLD MY HAND
WHILE IN THE SUBWAY STATION THE RUNNING AND THE PLAYING STOPS!

it was unclear to me what the boys were watching, what entertained or intrigued the children, they were bouncing in the seat, grabbing at each other, shoveling mouthfuls of popcorn down their throats, wrestling in the seats, still bouncing in their seats,
at intermission we did a long lap around the MCI Center
this lap included more running, more wrestling, more spinning, more falling, more bumping and bouncing into people and each other
this lap also included many passes past the very attractive concession stands... those spinning lights drew the boys in like a moth to a flame... I had to swat them away before the "you break it... you buy it" policy went into effect
not sure who... but someone was sure to buy the snowcone that has been touched by a thousand little hands!

after intermission we stayed close to the end
but evacuated before the close of the show....
this was done in the classic Bob Gwadz Style, Bob is my dad.....
in hindsight.... maybe we should have stayed till the end
my father spent way too much time trying to beat traffic... trying to make good time.... trying to beat the crowd
in this situation there was no complaint... the boys did not seem too concerned about the Chinese Contortionist act
I do not want this evacuation to be the norm... I remember as a child seeing the Washington DC Fourth of July Fireworks display from the back window as we drove back to Bethesda from downtown...

the metro ride home was uneventful
Eric seemed to be playing up to me in an effort to make Dean jealous
Dean seemed to be falling right into Eric's trap.... as well was I... it was pretty far into our discussion of the Metro Map that I realize Dean was completely left out
it is tough wanting to be a good uncle and wanting to be a good dad....
just as I can not pet both my dogs simultaneously....
I can not give my full attention to two children at the same time
to pet both dogs at the same time only gives a one handed pat.... which just is not the same thing
in this case... I felt that a two handed full attention discussion of the map was worth the risk

once out of the Metro we marched on the sidewalk from Columbia Heights to Mount Pleasant
when on the street with the kids I am not much fun
can be a bit of a drill sergant
as we walked along 16th Street I never took my eyes off the two boys
always anticipating any sudden acceleration or sudden movements
forbidding them to make contact with each other..... for fear that someone may trip or fall into the street

as it is a long walk from the Metro to my house
we took a break to recharge at the new toddler park over by Sacred Heart Church
the boys ran around exploring this park that they had never played in before
I watched the boys as I pumped back and forth on the swing
they seemed pretty well entertained, no need for my interaction/intervention or guidance
when they started to lose interest I swayed them towards our departure
it was time to go just the same... people were expecting us home

as we moved towards the gated exit of the park a young Latino boy came strutting over with a handful of those little POPPERS... he tossed them to the ground in exhibition for Dean and Eric to see
he was a sweet little boy who was more than willing to share his final POPPERS with Dean and Eric
there were two left... then they were all gone
before we could evacuate.... this little boy asked I Dean and Eric wanted to play FREEZE TAG
to the best of my knowledge my three and a half year old had never played tag before
so I had the boys each introduce themselves
then I had this little Latino boy, Andy, explain the rules to the game
he was clear and articulate... and maybe less Lation than he appeared
then I went over the rules again 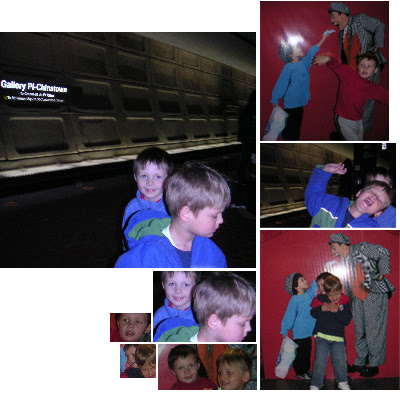 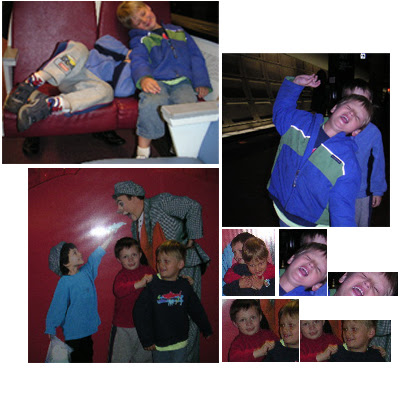