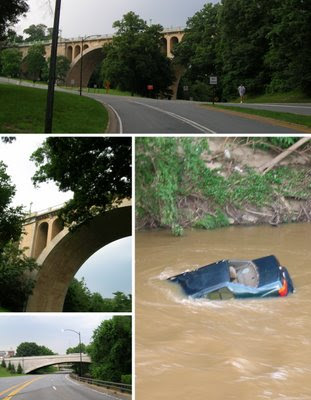 the rain has stopped
the flooding and the clean up continues
this week during the rain and during the clean up Beach Drive in Rock Creek Park was closed to cars
with the bike paths burried in sand, mud, and debris... the walkers, dog, walkers, bikers, and curious explorers took to the street
those lucky enough to split the cones and ride down the parkway got to experience a perspective that is usually seen as a blur in a car

it was awesome taking a ride with all the tunnels and the bridges and no cars
well... other than the 15 cars that were pulled from Rock Creek proper
I only saw one car stuck in the creek, but I was not out looking for cars in the creek

three days in a row I had the pleasure getting to sample this rare treat
sure I split the cones like a young fool on my motorcycle one
and sure
during that same era I remeber riding with the traffic in rush hour on my road bike
but now I tend to stay on the bike path for the multi-lane sections of Beach Drive
when it shifts to two lanes after the zoo...
normally Pierce Mill...
then I am usually back to the road
but the last few days I rode through the tunnel on the road
not on the thin sidewalk in the tunnel
not on the road in the tunnel gritting my teeth and wishing for the best while a tailgating car leans on the horn causing an ear drum busting noise as it echos in the tunnel
as if my speed hinders their progress
as I take the Zoo ramp exit into Adams Morgan and then Mount Pleasant they will in no time be back on the same bumper of the car that was previously in front of them

it was good...
on today's ride I went out to Rockville on Beach Drive then back the same way I came only to turn down the Capitol Crescent Trail into Georgetown
only to be a little let down to see that traffic had retaken the Parkway
so I cut through Georgetown to Dupont and then home
good day on the bike
legs are tired