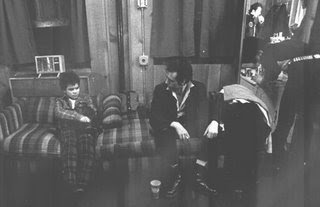 explain this...
how does this happen?
how is a 12 year old back stage a the Palladium with The Clash?

I am certain that this guy could write a tell all book that could be the basis of a dozen hollywood movies
from what it sounds
he has not slowed down a bit!

Harley... Keep Up the Intensity!
and
I will have to check out the links on your MYSPACE site to find out why you were in all those places at such a young age
guess all that history will give me an understanding of how you got to where you are now

there is something seriously wrong with that. the day the cromags get a myspace page is the day i expect to hear the cromags on DC101.

yet another end of an era. i was never into the skinhead thing either. matter of fact, i was pretty actively against it. (i don't remember much of the cromags lyrics, but i don't recall them being skinhead themselves...but i know their followers were pretty scary). but shit, the cromags were hard as hell!

the only guy i know who looks like he could eat henry rollins for lunch.

and they're on myspace?