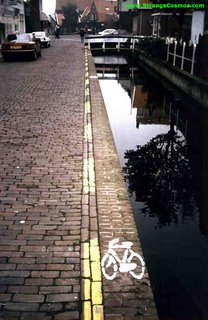 this image and other humorous images
some questionable images
here

and in DC
the self righteous biker

what should we expect?
they can not read the writing on the wall...
why would they read the markings on the street?

That picture is an abosolute riot!

I'm actually a little suspicious of bike lanes. I mean, I see their utility, but I sometimes wonder if the false sense of security they encourage makes them not worth the effort. Also, motorists tend to think that if there's a bike lane, you are required to stay in the bike lane (something that's difficult, of course, when there's cars there or when you're turning left).

There seem to be some cyclists who are almost violently against bike lanes, under the theory that they segregate us from the roadway. I don't know if I feel that strongly about it, because it seems like they might encourage some to ride their bikes who otherwise wouldn't.

I hear what you are saying...

but...
I have grown
the times have changed

bicycles need to be given their space
especially on major roads

bikes need to use the bike path

yet they can do anything they choose

there needs to be an injection of empath

I remember talking to Maggie, formerly of WABA, about those 9th st bike lanes. We talked about the lack of enforcement, the fact that motorists basically ignore the bike lane, the false sense of security, all that.

One of her points was that, if nothing else, those signs raise awareness to some motorists. Also, it's up to us as cyclists to use the lanes and contribute to that awareness.

Those particular lanes are about more than just bikes too - they are for buses and bikes. The idea is to encourage people to use these other forms of transportion. You get the idea - you're sitting in traffic in your car, and you see the bus and people on bikes zooming on by, it gives you the idea that you should bike or bus-it. Unfortunately, this whole idea is totally destroyed by lack of enforcement. In other words, why did they bother?

I totally agree with Chris...I think I may have even said that in a posting or two! I've noticed that on 7th street northbound, it gets really bad in the heart of Chinatown (by the arch)--is that H street? Anyway, I've concluded that it's not just the cars' fault! Yes, I've said it--not just cars. The problem is that this is such a big pedestrian crossing that any car trying to turn from 7th street (left or right) will have to wait til the end of the light because of all the peds. This is an intersection that would benefit from the San Diego style all-cross crosswalk, where pedestrians all walk at once and can cross diagonally. Cars wait their turn and then will be able to turn without people waddling from McDonalds in their way! I'm going to post about this idea on my blog later today...

yes...
cars are going to use this lane as a right turn lane

I just take it to the center line

there is less spitting on windshields happening these days

the city needs to evolve

the use of the people aiding in guiding traffic downtown...

a great idea
used all around the world

if they do not use that
maybe a ladder up the Chinatown gate
and let people climb over H Street
okay... that is silly... but could be fun