Booth Babes... a phenomena at all conventions 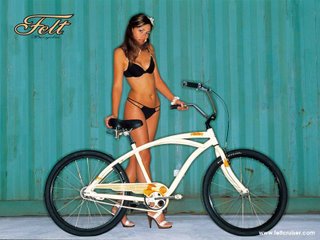 Interbike Booth Babe Queen Crowned by GOCLIPLESS
booth babes from other convention cultures
gamers love their booth babes!
if more cyclists looked and dressed like that young woman I assure you that cars would slow before making a pass went across the pond to get those images
www.frorider.ch
Posted by gwadzilla at 10/18/2006

i thought i was the one to pull the DOH...

I think the bike industry is in a sad state when it is trying to figure out to 'tap into the women's market' on one hand, and still supports and uses booth babes on the other. I think the Surly guys should counter next year by putting their hairy, flabby tattoed asses on display in thongs.

there is the notion in advertising that "sex sells"

I am not sure if that is true
but
as an old married man...
I do not mind looking at the pretty woman
but
I am not so sure it aids my decision in purchasing a product

most certainly the pro cyclists smile for the camera

lets switch over to tennis....

those girls in short skirts....
who gets the most endorsments?
the most winning athlete?
or the cute woman in the top ten?

jeff thanks for your comments
especially on the "intentional communities" post

did you ever sell your ONE ON?

and to think
I have this great picture of the Marzocchi Girls that I can not post out of guilt!