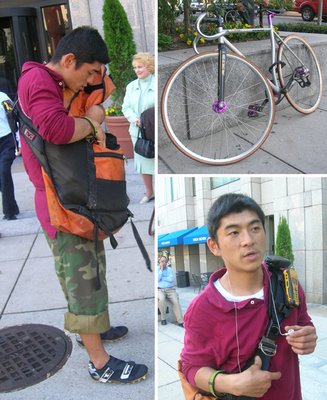 funny.... I have a number of shots of Tar at this same location
he did a slick trackskid on his approach
the camera was not ready
Posted by gwadzilla at 10/19/2006

The very first time I ever saw or heard of Tar, he was doing a long trackskid into Sherwood (aka Franklin Square). Not too long ago, before the cops ran us out, Sherwood was where all the messengers hung out. As he reached the center of the group, he whipped it into a 360 and crashed. Everyone laughed and pointed, knowing full well they couldn't do anything close to a 360 spin in a trackskid, but laughing anyway because it's funny when someone crashes while they're showing off. Or not. It's funny when people crash.

Anyway, Tar gets back up, rides out of the park, and comes screaming back in, full bore in another skid, whips it into a 180 spin which stops right at the edge of some steps, then he rides his trackbike backwards down the steps.

tar is at one on the bike

tar moves on a bike like a sparrow flies

god said let there be light and there was light.when god made tar , he broke the mold.he said their will only be one who will have the skills.and then it was done.the cool thing about tar though,he doesnt need to prove it! "the punisher"