moderation... everything in moderation 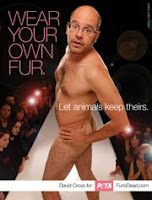 moderation...
everything in moderation
sometimes enough is enough
sometimes ideas go too far

watching this HBO documentary on the co-founder of PETA; Ingrid Newkirk
I AM AN ANIMAL 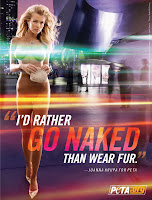 I am not positive
I recall hearing that Ingrid is diabetic
using medicine that was derived from research that involved animal testing
which well... throws all of her extreme ideas into a level of hypocrisy

bull fights? cockfights? these things are up for debate
but the house cat or the hunting dog 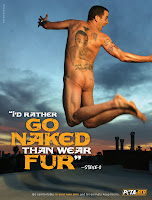 well... some of these ideas are just ideas created to be consistent

this lady is a freak

the documentary makes this point
and it rings true

There's a reason we evolved pointy teeth, and eyes in the front of our heads rather than the sides like herbivores. Hint: it's not to make us better at spotting celery and then grinding it up at the local salad bar. Honest docs will tell you that most people's bodies - especially babies' - aren't cut out for subsisting solely on weeds.

I've got nothing against people who want to enjoy malnourishment, that's their decision; but I have a big problem with them trying to inflict it on everybody else.

I think it comes down not so much to whether we are "natural" carnivores, but to the way in which we obtain our food. Factory farming is just a fucking horrorshow. Just because we've voluntarily removed ourselves from the life of hunters doesn't mean we shouldn't bear responsibility for how our food becomes food.

There is room for freaks, a very broad genus that, in the eyes of the public at large, currently includes hardcore urban cyclists.

the cruelty or abusiveness in unneccesary

but modern medicine and pepperoni on my pizza are neccesary