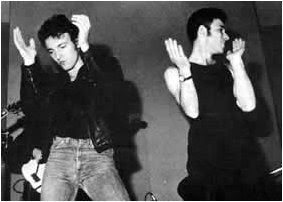 the tune fire that we all remember the pointer sisters singing
well... robert gordon was the first to record that song
that song was written by bruce springsteen
then given to robert gordon

this morning it took more time to gather my gear than to get dressed
than once my gear was gathered
it took more time to suit up than to ride into work
but... I would freeze and sweat in my work clothes
then I would not have the option for a post work ride if I did not have riding gear
so... I suited up for a real ride
when in actuality all I have is a short roll into work
a distance too long to walk
a distance that only a fool would drive
so the bicycle makes perfect sense

the effort to get dressed was slowed by the search for full face coverage
my black balaclava was no where to be found
actually none of my various weight balaclavas were anywhere to be found
sure I have the beard... but this morning was brutally cold
as the search continued it became more an issue of finding this thing than having this thing
several songs cycled through on the iPod through some old computer speakers as I scrambled about
just as I was about to give up
a black balaclava surfaced

finally here at work
got my gear
found one balaclava
but where is my thick one... the one lisa bought me when we were boarding at Eldora a few years back on a cold windy white out day

Temps in the teens...that's balaclava cold...

is this the season for stuffing my face with baklava?

how about covering my face with baklava?

I'm with you, Gwadzilla. Wore two layers on legs, three on torso, double gloves, plus of course, the balaclava. Glasses are key too.

Somewhat ashamed not to be as hardy as Icono, but I'd rather be warm.

Missed out on the baklava though. Mmmm...

Gwadz, Do U remember Jesse Gordon, Robert's son who grew up in Somerset and lives here? It's not that cold 2 need all the layers. But some get colder faster than others, an as long as 1 is warm and riding it's all good!

yes...
I am still in infrequent contact with Jesse and Glennon

Jesse also had an older brother who was in my class in high school, Tony Gordon