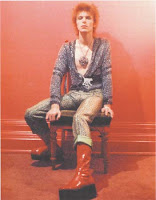 out of the shower
up from a nap
back from riding

I mean, who the fuck with that kind of money and fame does Jaguar commercials? (I'm ignoring the easy attack here: the sappy, sentimental, bra-and-panty clad dreck he effortlessly oozes onto polycarbonate plastic.) That's the sort of thing you do, if you do it at all, when you career is finished or five seconds before the official arrival of Armageddon, when no one is likely to notice or remember.

There. Is that what you were looking for?

there is nothing wrong with the jaguar ad
maybe as a child he always dreamed of having a Jaguar
the car of the upper crust... the british elite
then when giving the opportunity to be part of their ad campaign
that could have measure to fulfill more than a child's simple dream

Sting was great in BEE MOVIE!
okay... not great
it was fun that he allowed for an animated portrayal like that

is Bowie the coolest man in the universe?

my buddy chris sent me this

how do you think you would respond if Sting complimented you on your new fixie?

would you melt or would you snub?

The fact that Sting appeared in Bee Movie is proof he is irremediably uncool.

I'd say Ian Svenonius is closer to coolest man in the universe.

I am quite positive that Ian Svenonius would agree with you

I'd take bowie over sting in a cool fight anyday.

bowie is cooler than sting