a little confusion at the cyclocross nationals 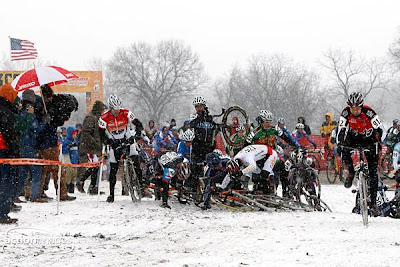 photo from cycling news
by way of pooch in africa

this photo tells many stories

yes... that is cyclocross

that is a fantastic photo!
I am curious about my brother marc's position before the pile up
maybe the answer will be on youtube later this week

the race started on a long slight uphill on pavement, and that was the first turn, to a short but steep rutted hill.
I had a good starting spot 3rd row and was doing well off the line. at the turn I went a little wide- the main pile-up was on the inside. I was expecting a likely crash there. as people went down, some were bounced across the track and almost took me out. so, the crash was still happening as I went by. based on the announcing, I think there was a 2nd big pile-up at the same spot a second or 2 later.

the start plus the crash left me in a good position, but I had a crappy race and couldn't capitalize on the good start. the conditions were very tough and I wasn't confident enough to ride it fast.

the flag
the umbrella
the stack of cyclists
and my brother making the human hole shot!

hold on
that sounds dirty!