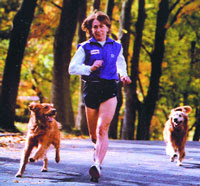 simple and plain
TEXTING WHILE DRIVING SHOULD BE CONSIDERED RECKLESS DRIVING

as a pedestrian, as a cyclist, as a father, as a human being
I tell you
people need to get a clue about the notion of CAUSE AND EFFECT
they need to balance to potential losses to the potential gains

why do I get angry and cuss at the car drivers around me?
because of their senseless actions
because of their lack of respect for the lives of others
because people are more concerned with shortening their commute by five minute than by giving people their right to life

It has been a decade since the senseless death of Judy Flannery
death of Judy Flannery
another death where the sentence did not fit the crime
yes... Judy was quite the soccer mom
she was the wife of my soccer coach of roughly six years when I was in grade school
she was a family friend
she was a friend to everyone she met
she left behind her a husband and children

Every time I see someone texting behind the wheel in my neck of the woods I wanna rip them out their whip and kick them square in the ass. Talking is bad enough. But I use Jott which allows me to "hear" text messages through my hands free headset plus it let's me verbal reply to texts. Voice recognition of Jott is truly amazing. More people should check it out!

There are just two places that have made it a crime to text while driving, New Jersey and Washington state, and in Washington state it's a secondary infraction. I wish more states would make it illegal, and at the same time I'm amazed that laws are needed to prohibit something that is so obviously distracting for motorists.
Gene at BikingBis blog

Ultimately, people are stupid. It's not hard to figure out that texting, etc, and driving don't go together. This is very sad.

Don't fool yourself. It isn't strictly a "hands-free" problem and therefore technology (i.e., Jott) that gets around the need to hold something while using it doesn't alleviate the situation. It's the fact that these people are trying to concentrate on two things at once, to "multi-task" to use a wretched and overused phrase, while sitting behind the wheel of a two-ton battering ram.

You can see people disconnect when they're in a conversation, and it has little to do with having something in their hand. They slow at green lights, and run through red ones. They slow down to merge onto highways instead of speeding up. Obviously these ass-backwards reactions aren't a function of the number of fingers wrapped around the steering wheel.

Simply put, their minds are elsewhere instead of here and now, instead of concentrating on the road and the safe operation of their vehicles (the "task at hand", to borrow a Buddhist term).

An extra free hand won't stop you from hitting or running over something you don't "see" because your attention is focusing on formulating the next scintillating burst of conversation and trying to figure out when to wedge it in between the words of the other moron whose doing the same thing on the other end of the line.

Save it for later, baby.