good morning to you too Mr. Cargo Mike 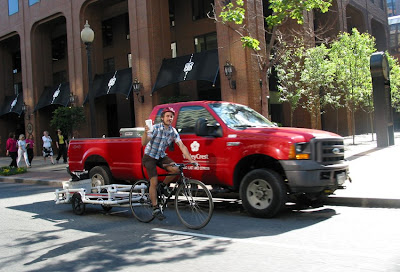 good morning to you too Mr. Cargo Mike!
and
good luck at the Hoo Ha in Virginia this weekend!
wish I could be racing there as well!

good luck to Dave V. as well... take it easy on the water slide with the kids
you need your energy for the race!

You are my Methadone, my stand in since I can't be there. Thank you. I have an addiction to that city like a junkie to the horse. I love and hate it. Since I'm in recovery now, the best I can hope for is Methadone. God bless you, you give me just enough without the withdrawls. Your picutres make my veins pulse with anticipation, when's the next fix?... and always you're there....

glad you enjoy it

sometimes I think it is pretty alright myself

I dig that photo. Did you plan that juxtaposition ? Two forms of transportation for specific purposes of hauling stuff, one Earth/people friendly the other not so. Coolio.

but these things can not be scripted

Mike sees me I snap another shot

the second of the three shots came out

that is what I got

there is a matter of chance
and predictability