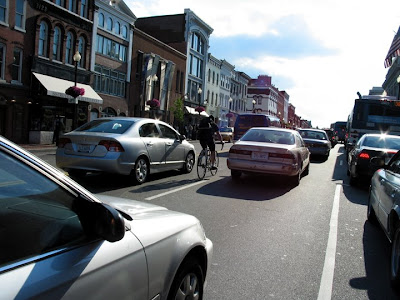 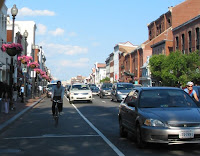 number streets counting down
17th, 16th, 15th...
at 15th I rolled up on a red light
at this time of day 15th Street is one way at this part of town
at the front of the pack of stopped vehicles is a DC Police officer on his Harley Davidson police motorcycle
among the post business human sidewalk traffic was a pack of people in biker casual
a mixture of black leather, black jeans, and black t-shirts
lots of black, lots of bandanas, and lots of gray beards
one of the bikers stalled with his small digital camera
the man with the camera pointed at the camera as the camera pointed to the motorcycle cop
the cop nodded
the man took his photo
I saw that the light was about to turn green so I focused on moving forward

there was some cat and mouse
the cars passing at their high speeds
while I was forced to overspin my single speed mountain bike and never really get any speed
yet... even with gear so small that it works effectively on dirt I am moving faster than the flow of traffic

I was just glad he was okay

witnessing this messed with my mojo

Would your mojo be maintained had you managed some kind of positive but safely distant connection with the cop?

my stance was positive...

I stayed along until I saw that he was safe

I only left after he picked up and moved his motorcycle