doing pretty good for one testicle 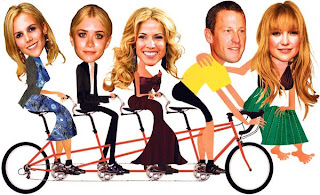 okay... just like any other man I am jealous
where is paris? didn't he have a tangle with paris hilton?
there were certainly other blondes on his bike
where is matt?
Posted by gwadzilla at 6/21/2008

In the article, the writer suggests that Lance's serial dating may harm his image as a philanthropist. Bah.

Lance is somewhat of a Bruce Wayne figure -- a wealthy playboy by day, and a superhero (of sorts -- fighting cancer rather than bad guys) the rest of the time.

I'm not a huge fan of Lance, but hey, if he wants to schtup his way through Hollywood's human lollipops, let him do it. He still does plenty of other good stuff!

"He still does plenty of other good stuff!"

Other good stuff? You mean running through an endless stream of hotties isn't good stuff? WTF?

Look, I'm no fan of Armstrong by any means either, but the guy shouldn't be criticized for whom he dates or how often he dates them. I'm pretty sure the girls who date/sleep with him know what they are getting into by now.

Why do people criticize people who live the way they want to?...I gotta think it's nothing but jealousy and maybe a little boredom.

Criticize him for probable doping, maybe, but for dating a bunch of girls he likes and who apparently like him?...WTF?

the cancer campaign is an honorable pursuit

but...
what about the quest to make cycling clean?

that could be a good side project as well
but maybe that is too much like Lou Reed, Vince Neil, and Keith Richards all doing PSA announcements for ROCKERS AGAINST DRUGS

Lance and Kate Hudson went to an Iron Maiden concert together... That rocks!