DIY: Snow Chains for your bike 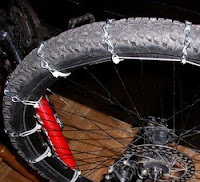 That article originally appeared on our sister site, Mtnbikeriders.com. VERY cool to see that Make picked it up -- that's quite an honor.

The spacing of the chains is close enough to get traction for the rear wheel, but I don't think there are enough contact points to catch a front wheel from sliding out from underneath you. Nokians work well with 296 studs, but the chains only have 16-18 points. Has anyone ever used these on iced over slush? Barring evidence to the contrary, it looks like these chains give you the same thing that SUV drivers got--overconfidence that you can go straight ahead real well, but no ability to turn or stop much better than a 1976 Ford Pinto. Most importantly, neither the Pinto or SUV driver face plants after loosing grip.

Hope you don't get a flat!

Personally, i'd try screwing a bunch of "studs screws" through a tire before I went this way.