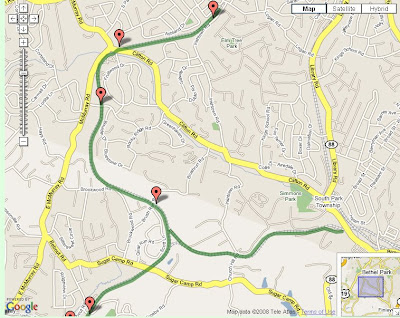 it is thanksgiving day and it has been a happy one so far
the day started off slow with the usual routine of the boys needing to be entertained
requests for Nintendo DS or a Movie got me out of bed a few minutes earlier than I had wanted
but having gone to bed early it was fine... I had slept enough
the cousins were over for bagels by 8am so we did not have to deflect these requests for too long
the kids ate a little then chased each other around

cotton and nylon gloves were soaked in no time
the various winter boots seemed to be doing their job
luckily it was in the high thirties
we migrated around letting our actions be guided by the variables around us
from the creek we moved to the lake
large rocks and logs broke through the ice
parental reminders about the dangers of the ice and the risks of walking on thin ice were repeated
a golf ball skimmed the full distance to the other side
the lobbed tennis ball bounced instead of breaking the ice
the ice was thick... but no where near ice skating thick
large logs and rocks showed the vulnerability of the seemingly impenetrable ice

no one fell in which makes the adventure a success
I had water to quench their thirst although no one other than grant got thirsty
no one complained of excessive hunger
no one asked to head back
there was not an utterance of being too cold or too wet
and there were only a few mentions of fatigue, but those happened as we neared the end of the hike

this vacation is being spent with the inlaws in suburban Pittsburgh
for those that do not know... things are a tad hilly in the burg
so I thought that the bike path on the old railroad grade would make the most sense
also better for carrying momentum than guessing myself around unfamiliar roads
unfamiliar roads with what appear to be unfriendly cars
there was a parking lot/trail head two minutes from the cousin's house which had me on the bike pedaling in under five minutes from the house
I was racing THE HULK and I was certain that the movie more than likely had not started when I was already trying to get warmed up on the bike

my shoulders are sore
it is that good sore... but sore just the same
no I did not crash... but crashing was entirely possible
although the snow was just about melted everywhere else
a good majority of the Montour trail was covered in packed snow
about 80% of what I rode was covered in packed snow
the rest was the uncovered gravel trail which was slow and squishy compared to the packed snow
there was some occasional crunch and a little ice
but nothing that dropping pace and staying smooth could not deal with

I hammered for a little more than an hour... an hour ten maybe an hour thirty
in that time I started out hard and ended hard
once I warmed up I was loving it
the air pressure felt good on my narrow cross tires
and the upright position and the wide riser bars gave me far more control than I would have flet with the road style drop bars

time to clean myself up and get ready for some turkey

back from downstairs
stepped out to clean up some of my riding gear
want to hang some stuff so I have one less excuse for riding tomorrow
when downstairs in the basement a glance out the back window had me face to face 8 feet away from a young female deer
after some inspection I saw another deer about ten feet to the side in the same position
doing the same thing... chewing
I watched confident that they could not see me through the glass
a combination of the reflection on the glass, poor vision, and being focused on nothing more than chewing
the deer were there and comfortable long enough for me to get both my wife and my mother inlaw for two separate viewings
but gone by the time I finally located my camera
it looks and feels like Thanksgiving Day

You were tewo block from my bro's house in Bethel Park at the start of the RR grade. There are definitely some evil grades and roads (drivers) around Bethel Park. Definitely have a creepy prob with herds of deer and flocks of turkeys in such a populated area.

There must have been a brain fog filled to the tilt with food and no teeth. When bad is bad, it is BAD!

No-Brainer - Something that requires little mental effort or intelligence to perform or understand. The term is often applied to decisions which are straightforward or sometimes to people who appear to lack intelligence.

The reason I wrote the previous comment "no brainer" was because I saw how poorly my original post was written. It was like a back country, toothless hick who really didn't say anything! Have a great weekend!