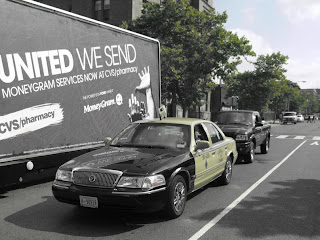 when people are in the right they may be righteous
when people are in the wrong they should be humble
this simple set of rules has been lost by modern society
this man in this cab made an unnecessary pass only to be passed by me seconds later
yes I was on my bicycle in the middle of the road... but on this block there are always an assortment of variables to the right and even to the center of the road that make it more sensible to take the full lane
the cab passed wildly on my right only to have to zip in front of me and stop in a line of cars stuck at the red light
when I passed I said something to the effect that he was a genius...
I made mention that his actions lead me to believe that he graduated top of his class from MIT
without him having heard or even process a word I said he told me to go f_ck myself
to which I replied retracting my genius statement
because such an act is not possible
when I turned around to snap this photo of the man the cab driver was ready with more verbal attacks
as I snapped this shot of him he told me to go screw myself
I told him that he was starting to repeat himself and went on my way to work
then I told him he was a total professional
to which he boasted 29 years
wow... 29 years of driving like and idiot... 29 years of driving like an asshole
traveling the streets with control over a car like a drunk teen
always a little too fast
always a little too sloppy
usually taking action without any knowledge of the consequences
I hate cab drivers... maybe worse than bus drivers.