it is not quite bangkok hot out there... but it is bangkok humid!

yes... bonus... and I had just enough water to wash it down
yes... you will want water to wash these things down
earlier this year the entire DCMTB squad was hooked up with goodie bags from WHOLE FOODS P STREET
these re-usable shopping bags were each filled with an assortments of good eats including coffee, pasta, and various energy bars
right in the middle of my little Colorado moment in the middle of Washington DC I tore open this Justin's Peanut Butter and Honey energy pack
ye ha... those mountain folk love their honey so much that at Eric's Down Under they have honey at the table so people can put it on the crust of their pizza
well... as I savored the flavor and then took that last swig of water I thought about how much I love free stuff... then I corrected myself... I really dig good free stuff.... good free stuff is awesome... bad free stuff is crap
as I hike I thought about how this hike should have included some other free stuff... perhaps some of that Anti Monkey Butt powder
oh may.... I was breaking a sweat... not quite out of the shower sweat... but definitely not ready to stand around in public sort of sweat
enough sweat that I definitely needed to change my underwear and t=shirt when I got home
yes... enough sweat that I will take a shower tonight
if only I had the foresight to have primed my underwear and t-shirt with a shake and bake style application of Anti-Monkey Butt Powder! 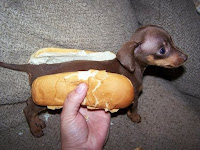 it could have taken my ass out of the jungle
it was hot... it was humid...
I sweat when I ride my bike... I sweat when I work in the garden... heck... in DC it is not uncommon for people to sweat when they are in the shower
Anti Monkey Butt can cure some of the discomfort of being active in this hot humid climate
okay... sorry... a poetic rant degraded quickly into a quick flurry of unpaid advertisements
at least you can pause and laugh about that dog in the bun