a few minutes of fun after the John Eaton Bike Swap 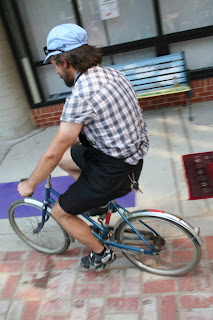 the John Eaton Bike Swap was a success!
lots of bicycles changed hands
lots and lots of bikes 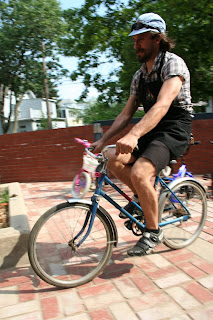 some highlights...
a beautiful Dutch Bike was donated but not sold
that bicycle was fixed up then given to my older son's third grade teacher who is trying to live CAR FREE
then... I sold a bike trailer and all the customer could carry
an adult bike... three set of old panniers... a rack... some old tires... and a number of trikes and kids bikes
all for 73 BUCKS!
(end of the day clearance sale) 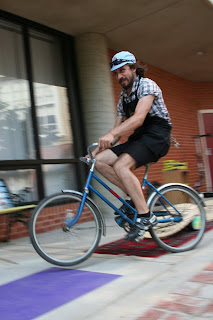 this was our basic premise... it worked
we could have used a few more hands
but Cargo Mike and I managed pretty well considering

THANK YOU FOR YOUR DONATIONS
this event could not happen without the donations from the people of this community!

BIKE PRICES
KID BIKES- 20.00
ADULT BIKES-priced as marked.
Full size bikes will vary in price due to condition and quality. Some bikes may have to roll our “as is” if we do not have the replacement tires or tubes.
BICYCLE DONATION-BICYCLE TRADE-BICYCLE EXCHANGE
Donating a bike gives a 10.00 credit towards a bicycle purchase at The John Eaton Bike Swap
SCOOTERS & TRIKES- 5.00
OTHER MISCELANEOUS BICYCLE STUFF
(pumps, packs, pedals) various prices… cheap… very cheap
REPAIRS
SPOT CHECK 15.00
The SPOT CHECK is a quick safety check. Just a little more than Air in the Tires and some lube on the chain. Some bikes will need AIR IN THE TIRES AND LUBE ON THE CHAIN.
The SPOT CHECK is a review to see if the bicycle is in need of repair. Checking to see if the bicycle is safe and not at risk of catastrophic failure. After putting the bicycle in the stand you will be told if we feel that this bicycle is in need of a visit to your "LBS" aka your Local Bike Store.
We will no be able to do any major repairs.
FLAT REPAIR with Tube Replacement 15 dollars
I will purchase a number of bicycle tubes in various sizes and hopefully have what people need on hand.
Flat Repair with Customer’s Tube 10 dollars
If you have a flat need us to replace it with your tube it will be 10 dollars.
Tire Replacement 10 dollars plus the cost of the tire
TIRES 5.00-20.00
New tires were purchased those will go according to cost and used tires will be cheap
TUBES 5.00 but not sold as spares only as necessity
SAFETY ACCESSORIES
BELLS- 5.00
Bell on Bike- 7.00

interestingly enough...
there were no Safety Flag Sales... only one Bell sold... no adult bikes brought for repair (although there were emails on the topic... but there turned out not to be time anyway)
a good deal was learned
hopefully if I attempt this again I will work out some of the kinks