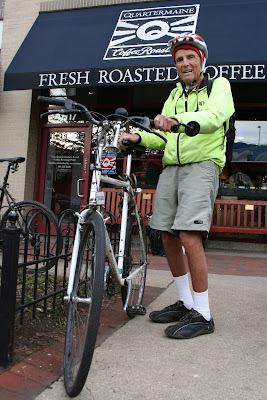 snapped this shot as I chomped on a Bagel-dog from Bethesda Bagel
which was "What's A Bagel?" back in the days when Major Mojo ruled the world
oh... oh how I miss The Man From Montgomery
what I would do for a cinnamon twist from Montgomery Donuts
while we are at it... get me a Maple Bar too!
oh... it was nice connecting with this gentleman
I gave it to him straight
HE NEEDS A NEW BIKE!
I told him this.... if you can afford a new bike you should buy a new bike
the bikes have come a long way since he bought this bike
what he can get for 300 hundred dollars would really improve his cycling experience
a crusty 30 year old bike that was entry level in its day has certainly served its time
from where he stands he is equal distance to Big Wheel Bikes and Griffin Cycles
more than likely... even with his agreement... he will stick with what he has
even if it is not offering him the pep of a new bike
even if it is more than likely offering the sensation of always pedaling up hill