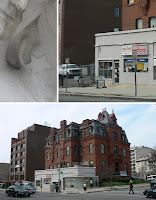 it was not just the well worn tire... it was the poorly adjusted brakes
so...
for one reason or another it was was said that I needed to ride a bike other than the frankenbike with the wheel barrow when filling in for Cargo Mike
which was fine... I was fine with it
strapped the trailer behind my worn and tired Specialized cyclocross bike with its mountain bike riser bars
well... well... I did not expect it
I was hustling down M Street
I do not snail... I hammer pretty okay... whether on the road bike... the single speed... the cargo bike... or the bike pulling a trailer... I move pretty good
usualy pretty logical
not slowing traffic down... unleass I am traffic.. which is no different than a car slowing cars down 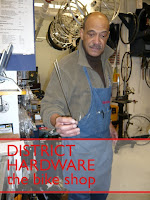 but I do submit and allow cars to pass
when it makes sense
well I was hammering down M Street when a car passed me obnoxiously fast and obnoxiously close
in the same lane
passing me close and fast
making some sort of point
so... when I passed him at the red light 20 yards ahead
I stalled in front of him... then as the light turned gree
I turned back... gave him THE BIRD
then with the finger raised I pushed the pedals forward and it happened
mid intersection my rear tire blew out
pulling the trailer at a slow speed with rear tire as flat as a pancake I rolled to the side of the road
the older gentleman in his cleanly presses shirt with extra starch on the collar passed with his window down
before he could say something I yelled at him
he yelled at the same time
neither caring with the other had to say
humbly I walked back to Edible Arrangements to fix my flat
on the sidewalk I removed the rear wheel
the knobby tire was off the rim and in my hands
the knobs had long since been worn off
there was a wear line on the sidewall of the tire on one side
this was identical to the damage to my road tire a few weeks back
it seems that I hung my bikes in a similar state of disrepair
both my Trek road bike and my Specialized cyclocross bike had well worn rear tires and brakes that were slighly rubbing the sidewalk of the tire on one side
so... with three more drops I tried to make a temporary repair
pulled the bad tube and put a tape "boot" on the worn spot of the rear tire
loaded up the flatbed trailer with three fruit baskets and started on my way
less than a block from my first drop I was on foot and walking
the tube had snuck through a different spot and my spare tube was now punctured and flat
I walked...
it was roughly 10 blocks to my next destination
then two blocks past that location to my final stop
which would put me just a stones through from District Hardware.... home to The Bike Shop
well...
the drops were less than free and easy
there was no one to sign at the first location
and then the same for the second
but... when I was nearly at The BIke Shop
my recipient called.... so I rushed back with the bike locked up
got my signature and marched back to The BIke Shop
at the The BIke Shop I said hello to the friendly staff and even said hello to the less friendly staff
then fixed things up so I could pedal home get in my car and pick my boys up from school
rookie mistake leaving the house on that bike
total rookie mistake
sure I had a pump, a patch kit, a spare tube, and some tools
but... the whole episode could have been avoided had I just paid closer attention to the condition of my rear tire!