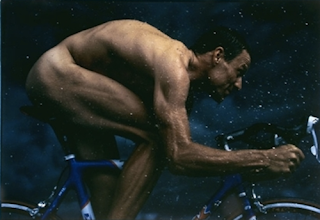 there is no way that you can take back these things
let the records stand
it was a "level playing field"
although I do not agree with it
I understand... this athlete did was all the athletes did to compete in this sport

look at the muscle mass in the NFL... steak and weights?
yes... and then something extra

it is sort of like the notion of speeding...
if the speed limit is 55MPH... we all drive 65MPH
do we expect to get a ticket for this behavior?
no... we do not see it as wrong
especially if we are moving with the pack

Lance won under those conditions
if clean... if Lance were clean and all the other racers were clean
Lance more than likely would have still won
but that is not how the sport was played

I have never been that big of a Lance fan
maybe it is the Texas in him
not sure...
but even with my long time feeling that he had doped
I have always found him to be an amazing athlete and a interesting person
his level of commitment was above and beyond his competitors
intense...
focused...
determined...
there is a lot that can be learned by the efforts of Lance Armstrong