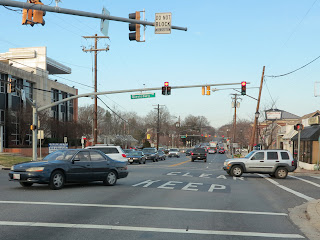 the other day I ran into Greg of WABA
we exchanged Holiday Greetings and then went into basic "how ya doing?" small talk
then leapt into a quick discussion about traffic
bicycles and traffic
and urban design

Greg believes that DC would do well to increase its "Don't Block the Box" efforts
cars pulling into crosswalks
cars stopping too late... stopping after the stop line
and
cars entering the congested intersection only to get stuck in a long queue of cars that leaves them stopped in the middle of the intersection when the light turns red
blocking cross traffic that has just received the green

that action is short sighted and ignorant
also dangerous and one of great causes of rush hour congestion
beyond that
it is knowingly selfish
not a mistake
but an effort to make the light that can not be made... even at the expense of others turn to go forward or right to space

sign and paint on the pavement...
I am not sure if we need more signs... but I do like the words on the pavement
just like I like green bike lanes
I think we need green bike boxes
and then in places where we have large BLOCKING OF THE BOX ISSUES
maybe we could put markings or words to assist people in being reminded DO NOT BLOCK THE BOX

I believe that the efforts of WABA are for a greater good... not just for the cyclist... but for the users of the roads as a whole