Elvis... the other Elvis 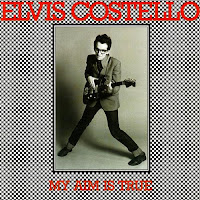 I would watch a video of a band but would not listen to their music otherwise
girls in the videos helped with that
sadly...
cable and MTV did not enter my world until the later years
maybe mid college

index cards in file cabinets and the dewy decimal system... we did not have Google

David Bowie had a few albums
but Columbia House and its One Cent deal brought greatest hits into my collection
The Clash had full representation.... with London Calling on forward I was able to purchase their albums at the store on their day of their release
then there were some artists... Elvis Costello was one of those artists for me
some artists only had one album selected to give me full representation

no Armed Forces... no Blue
just My Aim is True