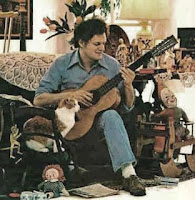 on those trips my brother and I were exposed to Harry Chapin
not like that... sicko
my step mother's brother was a big fan and dubbed my step mother... yes, home taping, a collection of Harry Chapin's albums

I totally forgot that Cats in the Craddle is Harry Chapin.. listening to now... going to listen to it again without my typing
it deserves my full focus


Harry Chapin was a story teller like no other
American Folk Hero!
I am going to give this a listen and a few others
then bed