I can see how easily Alice Swanson was killed... 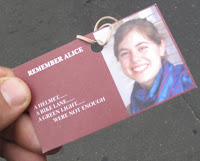 not insanely early but early just the same
it is early enough that the streets are nearly vacant
there are cars... trucks... and buses traversing the city
but no "traffic"

if DC had tumble weeds... they would be blowing down the middle of the road at this time of day

it is a strange time of the day
there is a certain type of lawlessness to it all
white vans... delivery trucks... buses... taxi cabs... and trash trucks move about the city a little bit too fast and a little bit too loose
I know.... my interactions with them are scary

the taxi cab is trying to find its next fare
speeding around... frantically looking for that man or woman standing on the corner with their hand raised
looking for a ride to the airport... or trying to get into the office on time
funny though...
it is all a matter of timing... does their fast pace get them more fares?
going slower may cause the driver to time things such that they encounter someone in need of their service or going faster may have them covering more ground
faster they may miss the person on the corner... passing that spot before they step to the curb

the logic is flaws... as flawed as their driving style
much of their search is timing

the DC Metro bus has a long history of bully behavior
the bicycle moves in the right hand lane
the bus needs to pull over and stop at the bus stop that happens to be in the right hand lane
this space needs to be shared
the bus is aggravated by the presence of bicycle
the bicycle is infuriated by the behavior of the bus
the bus tends to bully itself around
taking the space... pulling over to the bus stop in front of the cyclist... sometimes on top of the cyclist... making the cyclist slow or stop
rather than having the bus slowing and waiting their turn

it is madness...
sheer madness I tell you!
chaos
a situation where the early morning pedestrian or cyclist must be on guard
sadly... it is up to the pedestrian or cyclist to keep themselves safe
dodging the "point of intersection"
staying clear of the truck's wheel well or the buses grill
Posted by gwadzilla at 12/27/2012