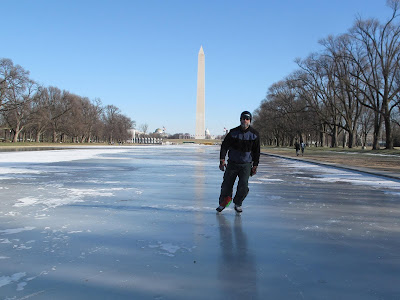 shot of me taking advantage of a rare opportunity to ice skate on the reflecting pool
this does not happen every year
so when it does...  I try to take advantage of it
on this year I went with my older son Dean

I figure... if people are walking on it
it is fine for us to spend a few minutes skating on it before we head over to the ice rink at the Sculpture Garden

it was madness... the National Mall was a sea of people on blankets with coolers
like a day at the beach... only without the ocean or the sand

it was crowded and there were definitely elements of danger

I did not stay long... as it was clearly out of control... and I feared things were sure to escalate
definitely did not want to get caught up in an "I told you so" situation with my dad
I was not to return to the Mall for the 4th on the mall until my teen years

in my teens I did not go for the "main stream" concert... but for the "counter culture" experience
that was where I experienced RAR in its various incarnations
stage set up near the reflecting pool adjacent to the Lincoln Memorial
there were all sorts of bands
but it was more about the scene than the experience

wish I had taken photos on that day each year
but no... the camera was not part of my persona
instead... I usually traveled by bicycle or skateboard
bringing not much more than a frisbee and a couple of bucks