Solidarity... is there solidarity? what is our relationship with one another? 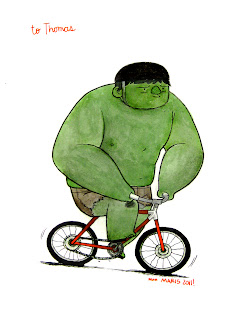 ya know...
if I were one of those beer drinking power boaters... I am not so sure I would be waving to ever other passing boat out on the water
so... why would I think I would be so friendly on the bike
maybe a nod of my head or a raise of a finger off the brakes
but really...
there are so many cyclists out on the roads today that it would be exhausting to say hello to each and every one of them

but...
the hello is different than the audible warning

the audible if a safety measure... not a social thing

I remember some time ago having words with an older gentleman on the Capital Crescent Trail about the need for him to give "an audible" as he passed
he tried to give me some idea about how long he had been riding that trail
and his feeling that the audible warning was not neccessary
well...
I trumped him... I RODE THE CAPITAL CRESCENT TRAIL WHEN THE TRAIL WAS TRAIN TRACKS!
TRAIN TRACKS WITH ACTUAL TRAINS USING THESE TRACKS!
does my being a user before him give me the right to decide what the safest and smartest action or non-action is?

I try to be aware of my surroundings
there was a cyclist approaching from the rear
I knew they were coming and approaching rather fast... or at least faster than me
like a jerk... when they were about to pass I did a little bob to my left
that was wrong... that was obnoxious

it was slight... not enough to cause contact
they were not yet to my side... but approaching my rear wheel

what was I thinking?
well... I knew they were approaching
but I also knew that they were to be another cyclist to pass me without offering a warning
so... I asked... "hey, give me an audible when you pass"
well... maybe if I had said that without the bob to the left things would have been different

but that is not how things unfolded... perhaps I initiated the negative conflict

the rider responded to my audible request by telling me to "go F-ck yourself"
well... I thought that was a litte over the top
then he said something else... he gave me the bird
we had a few more words...
then I said... something to the effect, "look out my fat friend... I am faster than you"
knowing that I was already maxing out my bike geared for dirt
I could not over spin it any more
I could not increase my speed
sure...I could raise my cadence a tad
but the input to reward ratio would have been non sensical

I kept my pace as I witness him dropping into a lower gear and picking up some speed
there was the hill by Calvert Street near the Maryln Monroe mural just slightly ahead
sure enough... I made up some ground
then... he made an unsafe\aggressive move to cross at the cross walk to evade me

but... then just ahead
at the tunnel....
the other rider went wide through the zoo on the multi-use bike path
while I took the path through the tunnel on the sidewalk

which of course put me in front of him on the bike path... unless he stopped in the zoo
or if he was using the zoo to get out to Mount Pleasant or climb the hill to Connecticut Avenue
those options were unlikely... more than likely he would be feeding back onto the bike path where the tunnel would spit me out as well

this had me wondering
what is this guy thinking?
we will certainly see each other again

maybe sooner rather than later

after all... if this is his commuter route
if he travels this path every day at the same time
well...
we would more than likely encounter each other again

so...
again...
action and reaction
or in my case
action and over reaction

image snagged from herehttp://dotsforeyes.blogspot.com
Posted by gwadzilla at 6/19/2013