that was a tense moment... sometimes I need to chill... it would be good if I could contain my emotions 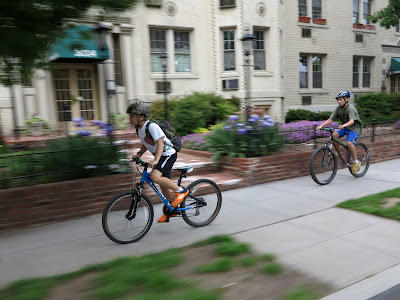 a few weeks back it was my wife's birthday... 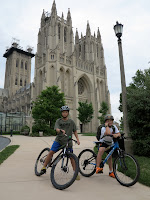 on this day I made it happen

it is tough...
there is all sorts of extra leg work to make this happen
but I made it happen
dropped the boys off at school with their bikes

then at time of pick up I went to Grant's school first... then we rode a virtually car free neighborhood route to Dean's school

We get to Dean's school and I can see that he is yearning for post school activities with his friends
well.... we do not ride the bikes that often
so I have to make the choice for him

we did some looping around and found ourselves at Something Sweet in Cleveland Park
we arrived and the boys begged for Root Beer Floats
ROOT BEER FLOATS?
I could not oblige... they could not have ice cream floats now and then cupcakes after dinner 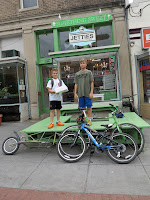 we turned it around... we went back to Something Sweet
I threw a tantrum... they offered replacement at half price
but there was no discussion... just that offer
my tantrum continued
I stormed out... allowing my kids to eat the cupcakes then and there

we rode home...
hustled home in order to allow Grant to suit up and get to Karate class
I had Dean walk Grant to Karate with the dog
with the instructions to go to Heller's Bakery and get something for mom

the half price replacement should have been good enough
but really... I still would have needed to get the cup cakes home

well...
LIKE FATHER LIKE SON
Dean got home from his several block walk with the dog and the strawberry shortcake that he selected from Heller's Bakery
and sure enough... it was not ugly... but it was not pretty
three of the four sections of cake were somewhat squished 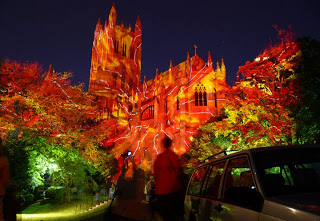