a post work ride on the Cabin John Trails... 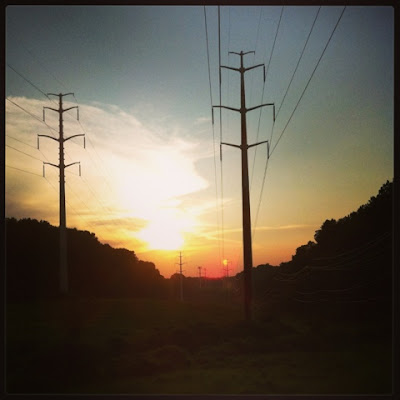 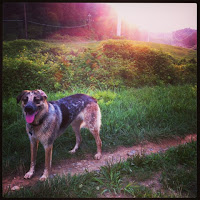 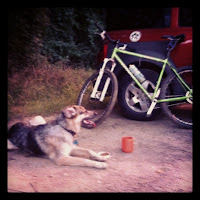 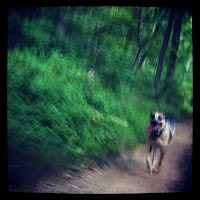 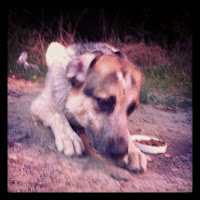 yesterday I was tired...

but..
when there is a window of opportunity
gotta make a wise decision and squeeze through

my boys were camping at camp that night
which meant I had nothing pressing after work
so... with the longer summer day I figured I could drive out to the Cabin John Trails for a quick post work dirt ride

as I rode I battled with my lack of motivation
sure... I knew it was a "window of opportunity"

after all... any mountain biker knows...
it is not responsible to mountain bike on wet natural surface trails

the couch was calling

DOOR TO DOOR I MANAGED TO MAKE THE DRIVE IN 25-30 MINUTES!
FANTASTIC!

it was hot... we were not even on the trail and I could see my dog Didg was already in the need of water
so when we got onto the trail along side of the creek I pointed to the water
but no... as I got rolling on the bike Didg started to race with me
he is always so excited about these adventures with the bike
running along side of me... sometimes leading the way and setting the pace

then... while Didg still rested in the water I started off
without having to call or whistle Didg was on my back tire in no time at all

again Didg raced at my side... almost pushing the pace as I felt that I needed to be ahead of him
both of us wanting to be in the lead

we each smiled as we got some momentum forward

I had Didg's leash stuffed in my jersey pocket for the road crossings
several of these trail head to trail head gaps are about a city block of road away from each other
which had Didg on leash running along side of me on the shoulder
the cars rush by pretty quick... never altering their pace for me or my dog
basically the same car commuter bullshit

Didg was doing pretty good but as I was on the last leg of the "out" on the "out and back" I could sense that he was already getting tired
the full trail in this heat may have been a little ambitious
hot... humid... and longer than we usually ride\run together
but... we were committed

I thought for a second that I could tie Didg with his leash to a tree in the shade by the water
but I knew he would not want to be separated from me
there is no explaining to a dog that "I will be right back"
sure he can understand that outside a store front
but out on the trail? that is a little obscure

so... we knocked out the last section of the "out" together
stopping more frequently for water that I usually do
that would be the tone for the return trip

the light was dropping fast and I did not bring a headlamp
so... I tried to keep pushing forward

I was also getting tired
so.. I wanted to knock it out and get home
I assured Didg that it was almost over and we were nearing the end
when we hit that last leg of trails
we were both stoked to be getting closer to the car

we drove home... stopping for gas and then Z Burger
ordered enough food for a family of five
or so it seemed when they swiped the credit card
shamefully only giving Didg half a burger and some french fries
not sharing any of my Chocolate Shake with him!

ah...
it was a good ride
it was good to get home
Didg slinked his way into the house and drank some water then ate some more fries
only to flop down exhausted... but after a few moments rest he was recharged and wrestling with our neighbor's dog, Karma, who was over visiting

ah... a FANTASTIC WAY TO SPEND A THURSDAY EVENING!

I need to remember how close Cabin John can be!
next trip... maybe I will explore some of the alternate trails and off-shoots that I am less familiar with

previous mentions of CABIN JOHN on the Gwadzilla Page
including some links and some maps
http://gwadzilla.blogspot.com/search?q=cabin+john