boys are back from camp... 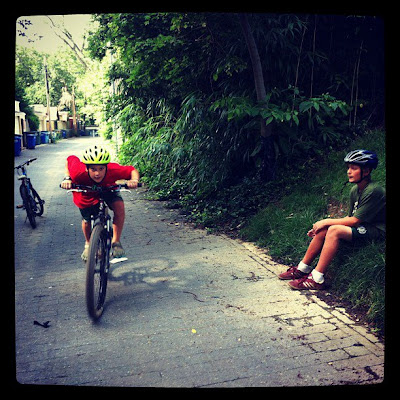 the boys are back from camp...

I gave them some space... I understand... they wanted to settle in... they wanted some down time
but... after an afternoon of virtual nothingness
it was time to get motivated
there was talk about a movie

what movie was the first battle... then what movie theater and the battle moved to strong objection from young Grant
dad made the final call
Monsters University in Georgetown in 3D
we would be riding our bikes

then... with time slipping away we went to Moby Dick for dinner
eating dinner right before the move decreased the need for an excess of junk
we brought our water bottle into the theater and shared two boxes of candy and skipped the popcorn
the movie was good

when we got home...
we went ahead and lit off some fireworks with some kids from the block
the boys were at camp for "The 4th"
so... they got their chance to light off some stuff
it was a blast... dug out some old bottle rockets and fire crackers to escalate the danger factor