tip your mechanic this holiday season... 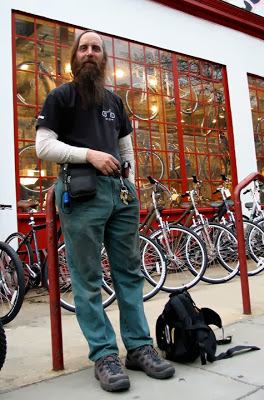 Paul... formerly of City Bikes now with Bicycle Space
decades ago I worked in a shop
it amazed me how people thought that the local bike shop was a community service
air in the tires... loose handlebar... seat adjustment...
things less than a repair... but needed to be done just the same

no money changing hands... but services rendered
and time taken away from employees that could have been used to generate revenue

so this goodness evolved into something more practical
as I made the simple adjustment I made note that it is our practice to charge a minimum of 7.50 if we touch a bike with a tool
but I can not justify that charge for this simple repair
so if you wanted to contribute to the mechanic's lunch fund... it would be appreciated

lots of pizza purchased that way

yes...
tip your mechanic...
bring by a bottle or wine or a six pack
they are doing way more than putting coffee in a cup
and you tip at Starbucks

how about an occasional tip here?
(not just to bearded Paul...  but to any mechanic that is going above and beyond)