quick note to the silver haired devil in the flashy BMW

ah... this was the other day
this is everyday
people suck
people suck even more when they get behind the wheel

well... it was not entirely a straight shot
yet it was more of a straight shot then the round about route that the Rock Creek Bike Path takes me down to the river and then into Southwest
which often involves dipping over to Hains Point or crossing the river to the Mount Vernon trail

no... the objective was to get to work
not to get some exercise

out the door... less than a city block on the sidewalk... then onto the street

immediately my cloaking device makes me invisible to all drivers around me
at the four way stop a block from my house I watch and I wait as cars queue up
one car goes... another car goes... it is my turn... I go
then I accelerate to dodge the car that has gone out of turn
never seeing me... never factoring me into the equation
never giving me my turn

less than a block later a contractor in a white van comes up the alleyway that is bisecting the road I am on
I have no stop sign... I have the right of way
the driver never looks left
the driver of this white van never sees me... I am never factored into the equation
it is as if I am not there

there I was.... not two blocks from my house and already enjoying the pleasures of rush hour traffic on a bicycle in the city 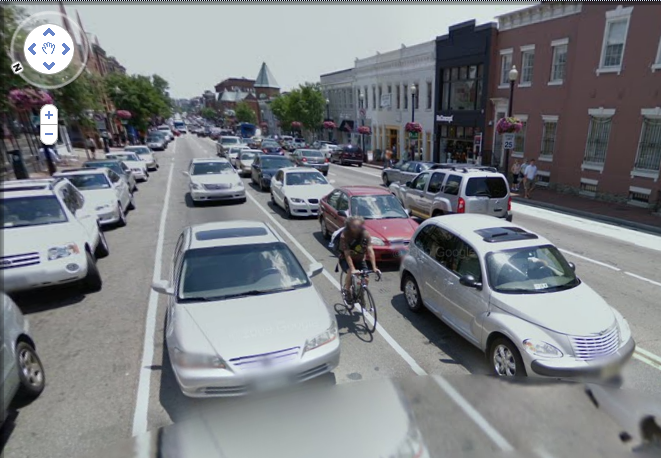 up Lamont Street past the house where I lived a decade or so ago and then onto Mount Pleasant Street
ah... more of the same
cars pulling out of parking spaces
cars refusing to make complete stops at the stop line at the stop sign

I do not ride all the way to the right
I do not ride in a straight line
I try to put myself where I am most safe
and well
riding all the way to the right along side of parked cars would not be safe
car doors opening... pedestrians stepping into the street without looking
cars pulling out of parking spaces without a glance back
cars pulling to the side and then stopping and double parking with no concern of their blocking my path

I anticipate these variables and I alter my trajectory

I dodge oncoming left turning traffic
I give pedestrians crossing the street in front of me fair space
and I try to avoid getting run over
with a Metro bus behind me I take the full lane...  I know... if I stay to the right they will pass me fast and close... they will fade to the right to get to their bus stop... they will pin me to the curb
it is frustrating to have this happen... frustrating and dangerous

as I have come to understand... the only person concerned about my health and well being is ME!

off Mount Pleasant Street and onto 16th Street
I split the lanes to keep pace with traffic
I am rolling downhill... I could go faster... but instead I go the pace of traffic while occupying the full lane
I would stay to the right... but the right is not clear
the right lane of traffic is always congested with right turning traffic, traffic entering the lane from the right, parked cars, double parked cars, and of course... DC Metro Buses picking up passengers

so... I migrate from the right lane to the center lane... then sometimes over to the left lane
always looking ahead
always trying to anticipate danger... then avoid it
it looks like I am riding crazy... but I am really riding sane

cars pass me on the left... the left lane becomes a left turn only lane
I know that these speeding cars are going to try and sneak into the center lane so they can continue going straight
I adjust accordingly 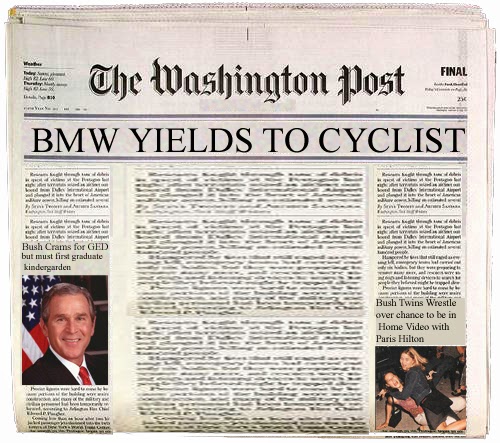 16th Street is a blur...
several aggressive cars enter my lane without a glance
not so much as a glance in the rear view mirror
never so much as a turn of the head
it amazes me that there are not more accidents each day

people are really not so good at this driving thing

I hit one intersection as the Green turns Yellow
it does not shock me as the cars behind me push the yellow... maybe running the red

man... I am not getting to the silver haired fox
let me jump to H Street...

so I am pointed forward... in the center of the center lane
the left hand lane is clear
up ahead a block or so is a red light
then with maybe six or seven car lengths til the intersection a BMW pulls up along side of me then fades into my lane

I guess this guy never took chemistry
the has to be some rule about occupying space
levels of concentration or something to that effect
either way... I am in this space and this guy moves his car into the same space
something has to give

if I do not slow and move to the side I will make contact with the rear quarter panel of this flashy BMW sports car
I adapt... I clear the way so that he can take this space
why? he clearly saw me as he passed me

he takes my space in the lane.... I spit on his car
my spit was not as viscus as I would likein fact it was light and flaky and did not have the effect I intended so I looped back to give it a second shot

as I cross in front of his car in the cross walk this silver haired fox in this flashy BMW lunges forward as if to hit me... I accelerate... I am shaken but not stirred
then he leans out and starts barking at me
sure enough... he is here to teach lessons
he did not approve of my riding style... so he decided to bully me with his car
"you are going to get killed if you keep weaving in and out of traffic"
"you need to get off the road"
"you need to stay in the bike lane"

there is no discussing things... he is talking... he is not going to listen
I yell some profane bullshit at him
I notice a bicycle cop across the street as we our altercation continues
I know the cop will take the windshield perspective
I spit again and then peel away

asshole... fricking asshole
true I did not help the situation
but it is hard to kill the world with kindness when someone tries to kill you with their car
it is a difficult thing to have a conversation with someone who is so wrong yet so confident that they are right

enough on that guy... I bet he told his story to his car driving friends and they all played a little show and tell about "those dam bicyclists"
when really... they are the villains
the cyclists are just trying to fit into the car chaos

it the cars drove in a manner that is more respectful of others then there would be less need for the "weaving in and out of traffic"
but double parked cars... cars standing in the no standing zone
cars and trucks blocking the bike lane
cars failing to make complete stops at the stop line at the stop sign
all of these things make it IMPOSSIBLE for a cyclist to just ride along in a straight line
heck... the bike lane is in the DOOR ZONE and car drivers do not look back when they open the door

so... a smart cyclist adapts
adaptation is part of survival