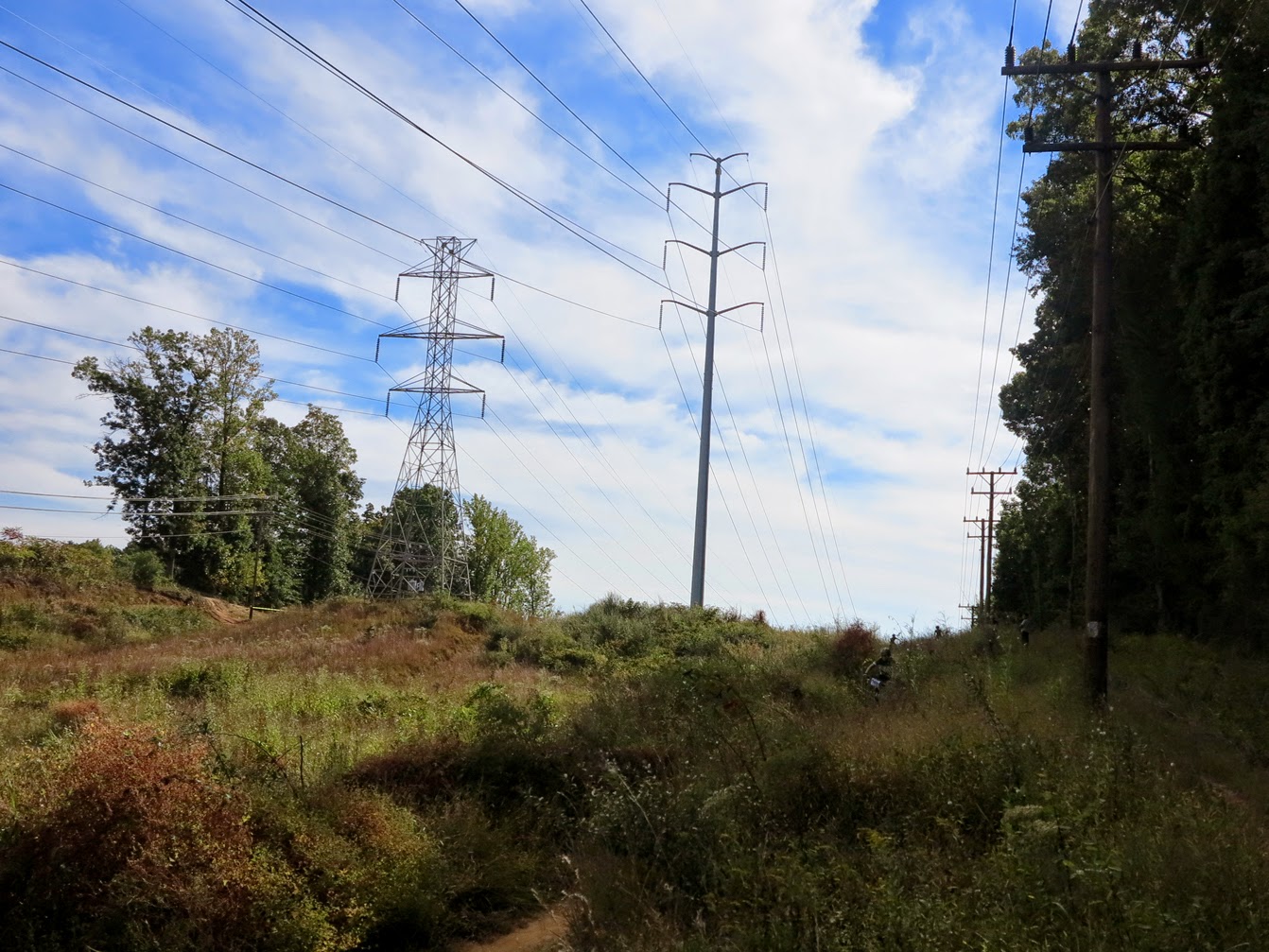 so... while still on a buzz from being so stoked about our trip to West Virginia we took the bikes out to Wakefield Regional Park for the Trails for Youth's JBOMB!
in years prior the JBOMB was a series... this year the JBOMB is a one day affair
bummer... but we will take what we can get

with the growth of NICA mountain bike series in Virginia the attention of Trails for Youth has been chasing down these other races instead of hosting their own series
I can see a lot of advantages to supporting the growth of the NICA Series
in fact... I would love to see some NICA action at Fort Dupont

what a thought... a NICA Race at Fort Dupont?

sorry... getting side tracked
and well... with my no more than a scan before hitting Publish and Post I need to try to keep on task
trying to get something down about the boys racing this Sunday past at the JBOMB 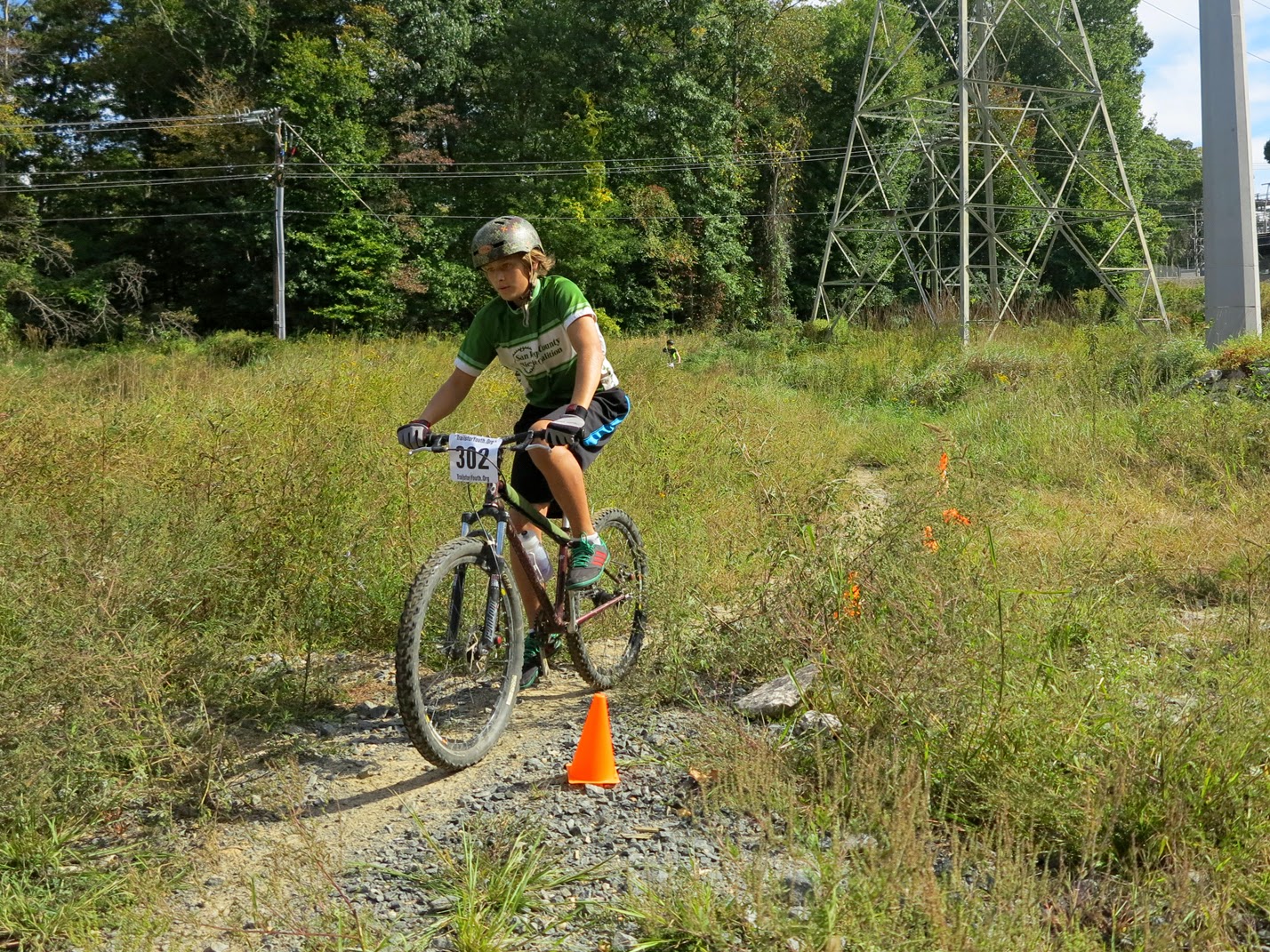 oh sure... Grant's suspension fork is blown out... nothing I could do between last weekend and this weekend
no time for a rebuild... plus... in part because I lack the know how to do a rebuild a suspension fork... but also because there was no time to get the fork to a shop and back between West Virginia and Wakefield

so Grant would be riding his geared Trek mountain bike with a fully compressed suspension fork... to which Grant shrugged his shoulders and said... "rigid is faster!"
while Dean would be racing his single speed Gunnar that he has nearly outgrown

the boys were stoked... stoked yet nervous
pre-race anxiety is normal...
they each got a little more than butterflies when we talked about the race
they each went through the same set of emotions that any adult racer would go through

who will be there?
how will I perform?
blah blah blah...

then Welcome to the Jungle came on the radio...
HERE IS A GOOD SONG TO CARRY WITH YOU!
https://www.youtube.com/watch?v=o1tj2zJ2Wvg
listen to this... a good song in your head helps to keep the tempo up

the boys only gave me half attention... I had my distracted sons repeat what I said so that I was not just talking to hear myself speak...
"be considerate when trying to pass
find safe smart places to pass
be vocal about the pass
ask to take the pass... if you have to... take the pass
but do not put yourself or others at risk trying to pass"

and of course... allow the faster racer to pass
but that does not mean pulling over for the other racers... especially if you are racing them
decide accordingly
if someone is faster... let them pass... let them ride their race
if someone is going to pass and drop their pace... do not let them pass as you do not want to get stuck behind them... you want to try to ride your own race... not get stuck at someone else's pace or their inability to clear various technical obstacles

there was all sorts of talk like that
the boys understood... they had been through this before
I warned them about the possible competition
respecting that we are city folk and do not get into the woods that often
and that there are kids who are taking cycling seriously... mountain biking and biking in general as their main sport

we talked about winning
not that it is so important to win... but to go out and try your hardest and to try and do your best
ride within their limits
again being safe and smart

don't "over cook the turns"
don't crash going out of control

it all sound so confusing
so many "if then" statements 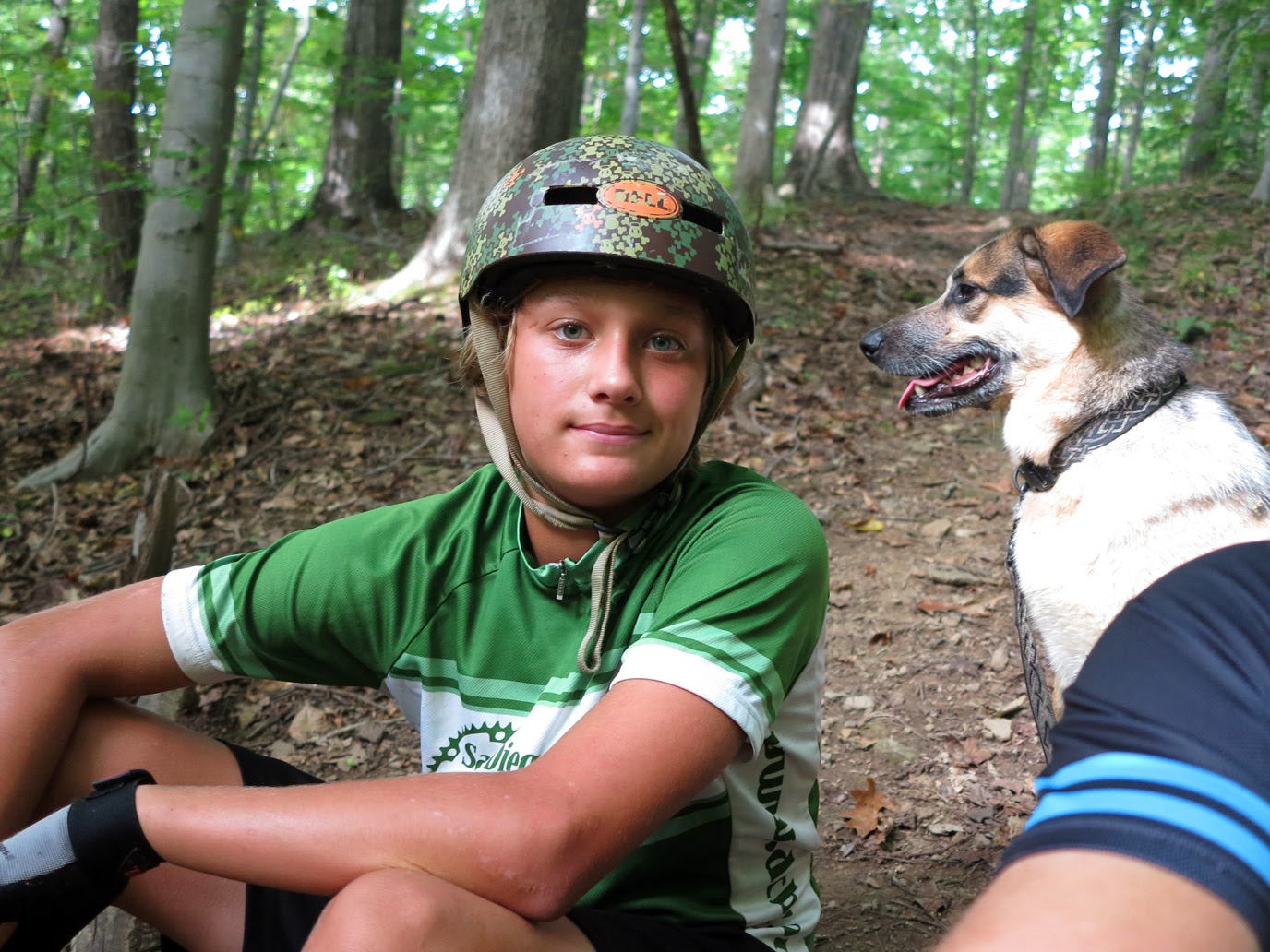 there was some city traffic... but Interstate 395 to I-495 and then Braddock Road was pretty smooth
we arrived with a little less than an hour to prepare for Dean's race
which is really just enough time to register, warm up, and take the line
Grant would have two hours before his race start

Grant was suited up and riding his bike before I got his race number
he was not warming up... he was checking out the bridge over 495 with the dog
which was fine... it is nice that he is confident with his surroundings
able to explore without getting lost


somewhat anxious for the race... me not Dean... I moved frantically between actions

unloading bikes... registration... numbers on bikes... fuel up Dean... release Grant... I had Dean do a little warm up and then when we encountered each other again I took Dean to the gravel uphill
strict and firm... maybe a little too curt... I tried to explain "the fast line" on the lose gravel
and how he would need to chose a smart line

then I had Dean try the hill once.. then again at speed
I wanted him to know if he could clear this short steep loose gravel climb on his single speed
making him understand not to try and grind it
"if you can't spin it... you will have to dismount and run it"

Dean was able to ride it
he rode it twice and then I sent him on an up and back on the road by the creek and some single track
stressing that he take it light
just warm up... stay loose 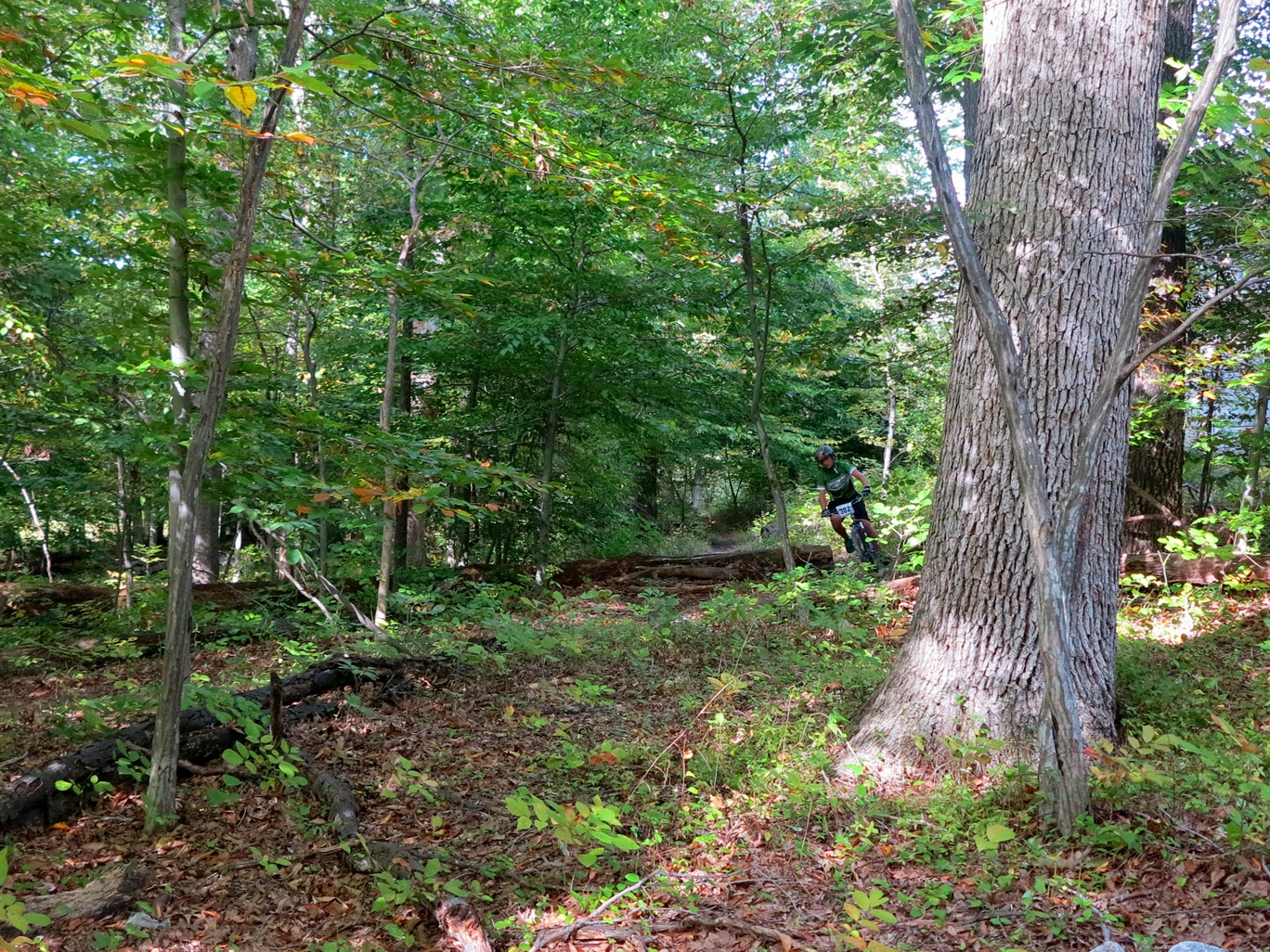 out of the woods with the dog and I rode up to Dean and gave him a quick good luck
race director Pat Childers was giving his pre-race pep talk
his advice to his racers being the exact inverse of mine
sure Pat was right...  the gravel hill does not decide the race... it is a long two lap race and will be places to catch up and places to pass...

all that was true...
but...  the strategy to win and control the race... the best strategy if the racer can make it happen is to win the gravel climb... sprint to the hole shot... then control the race from the front

let all faster riders pass you
don't get caught behind any suckers
avoid the crashes and the pile ups
if someone passes... pace off them... decide where to fight to regain the lead
and then gauge the race from there 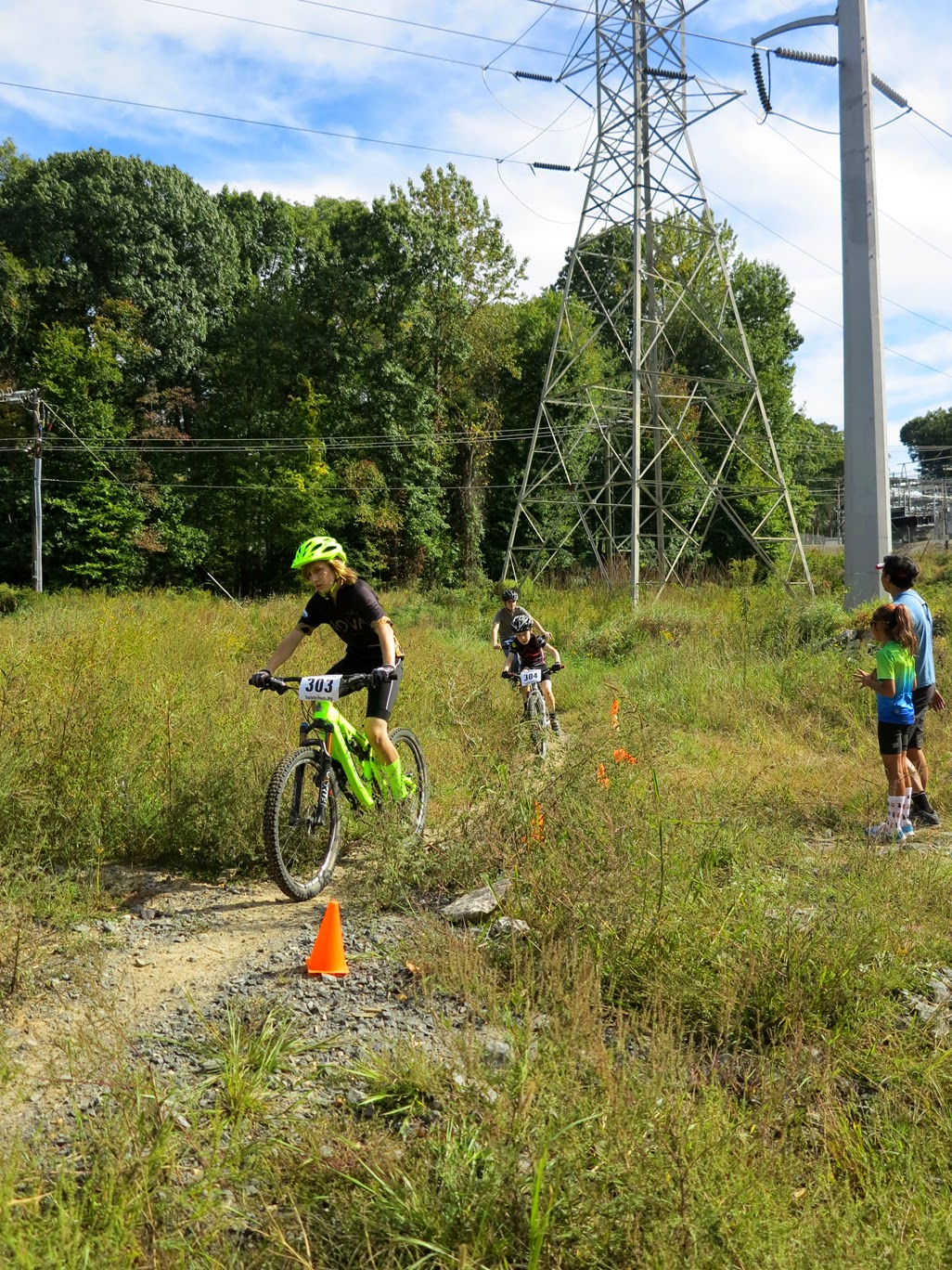 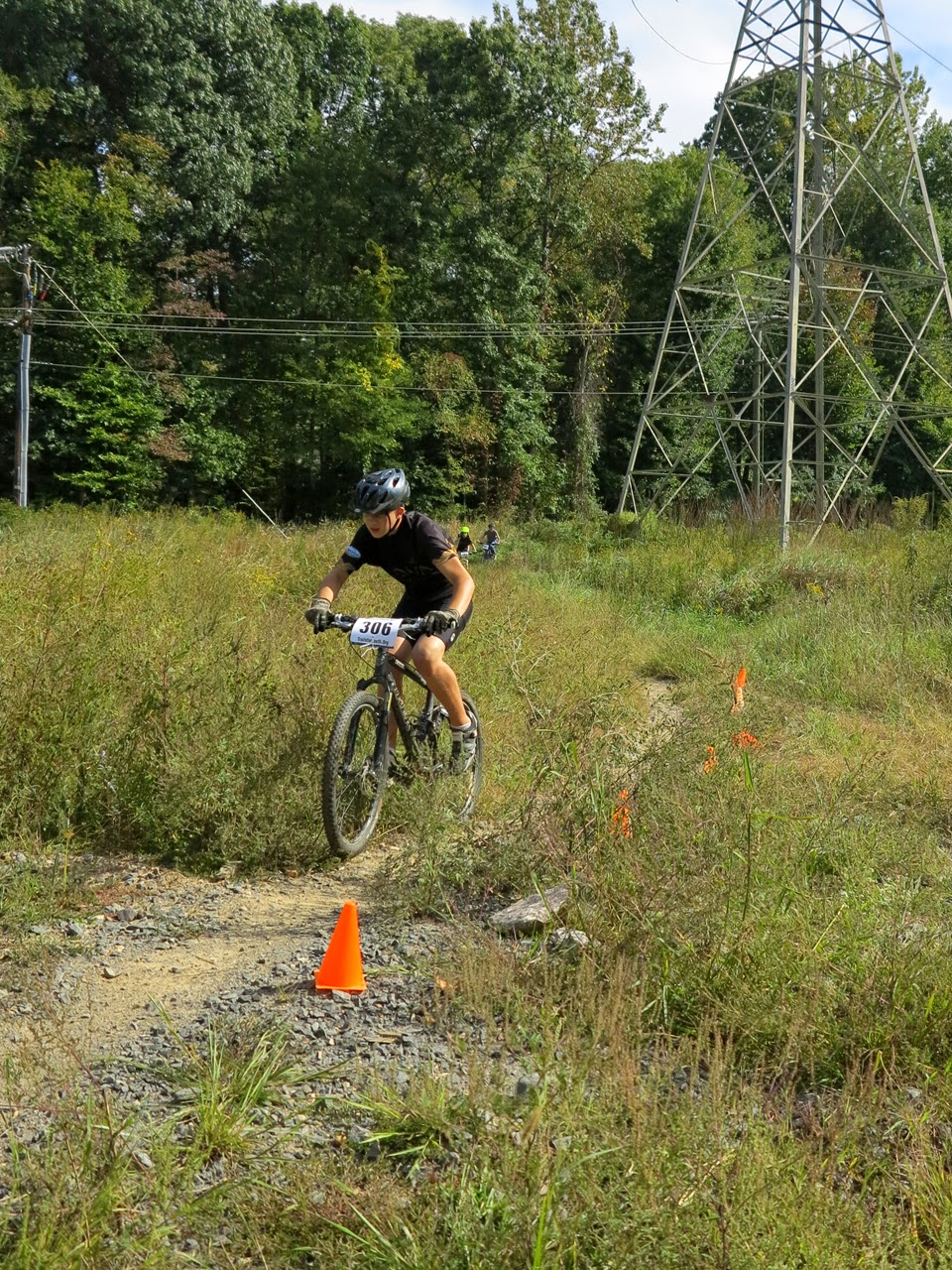 although it is not displayed in these photos... I was a little shocked and totally stoked to see Dean was the first Junior in the older age group to be rolling down the singletrack
when Dean passed he already had a pretty decent gap before the next racer
he was spinning that single speed pretty good
I feared he was going a little hot and called out for him to settle in
not sure if he knows what settle in means 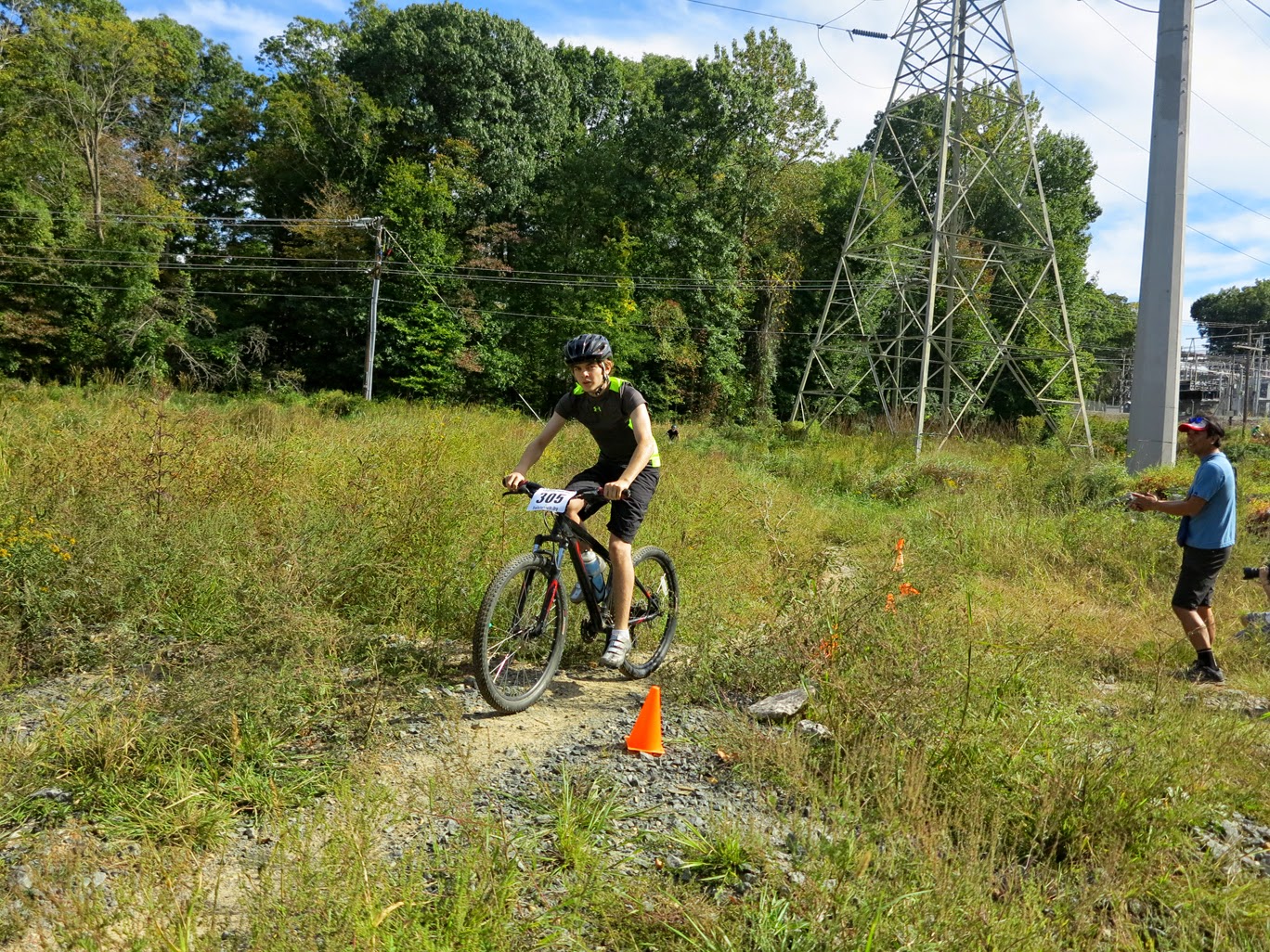 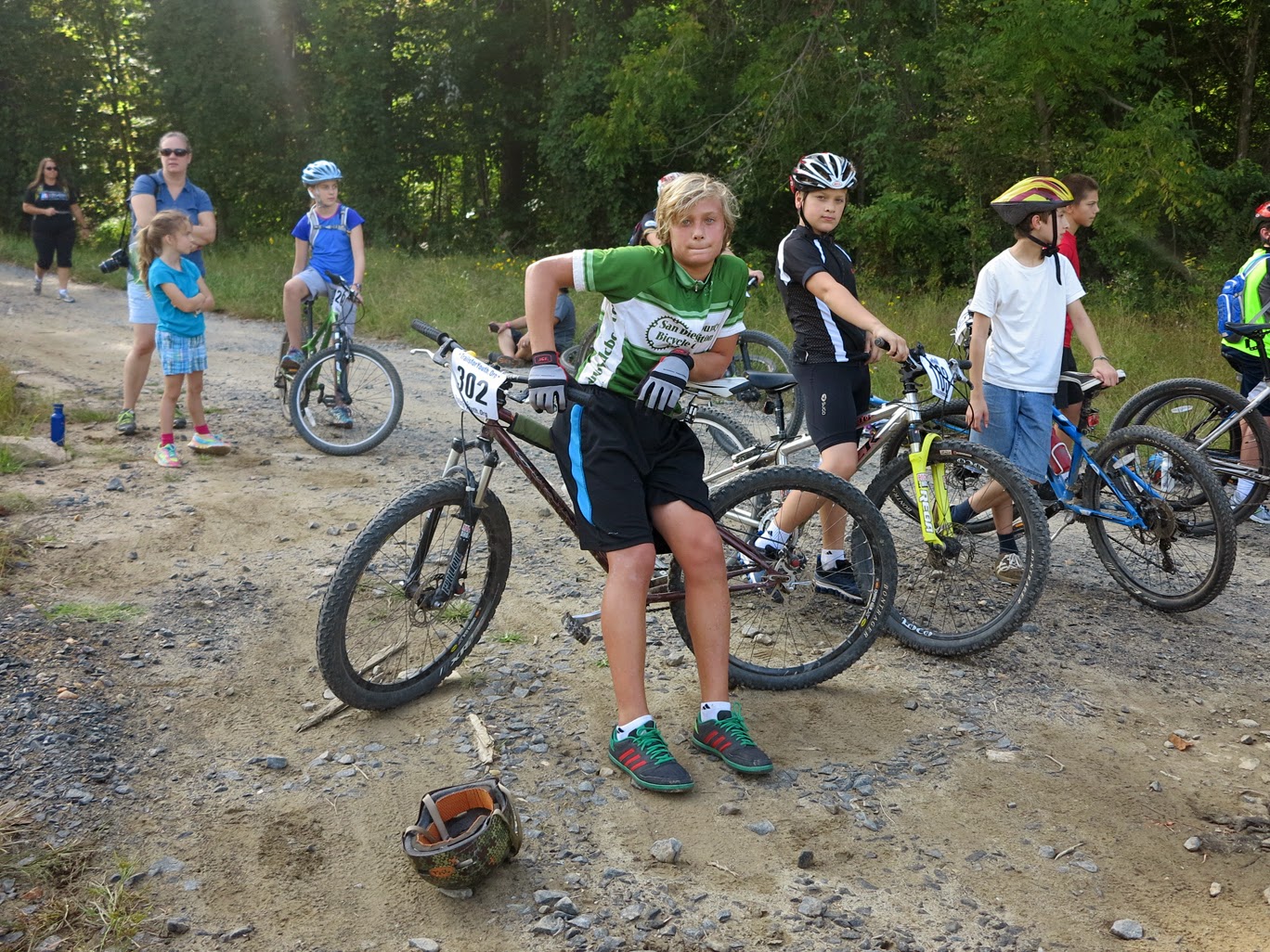 so... up to the powerlines
I hung with race EMT volunteer Chris Barnes as we watched the ant size racers in the distance
I could see that Dean was the leader in his jersey that I found as I checked out of the Hotel in Fort Collins... I looked for it could be owner... then forgot about it... Dean has been wearing it ever since

the San Diego Bicycle Coalition would not complain... Dean is putting them on the podium from time to time
http://www.sdcbc.org/ 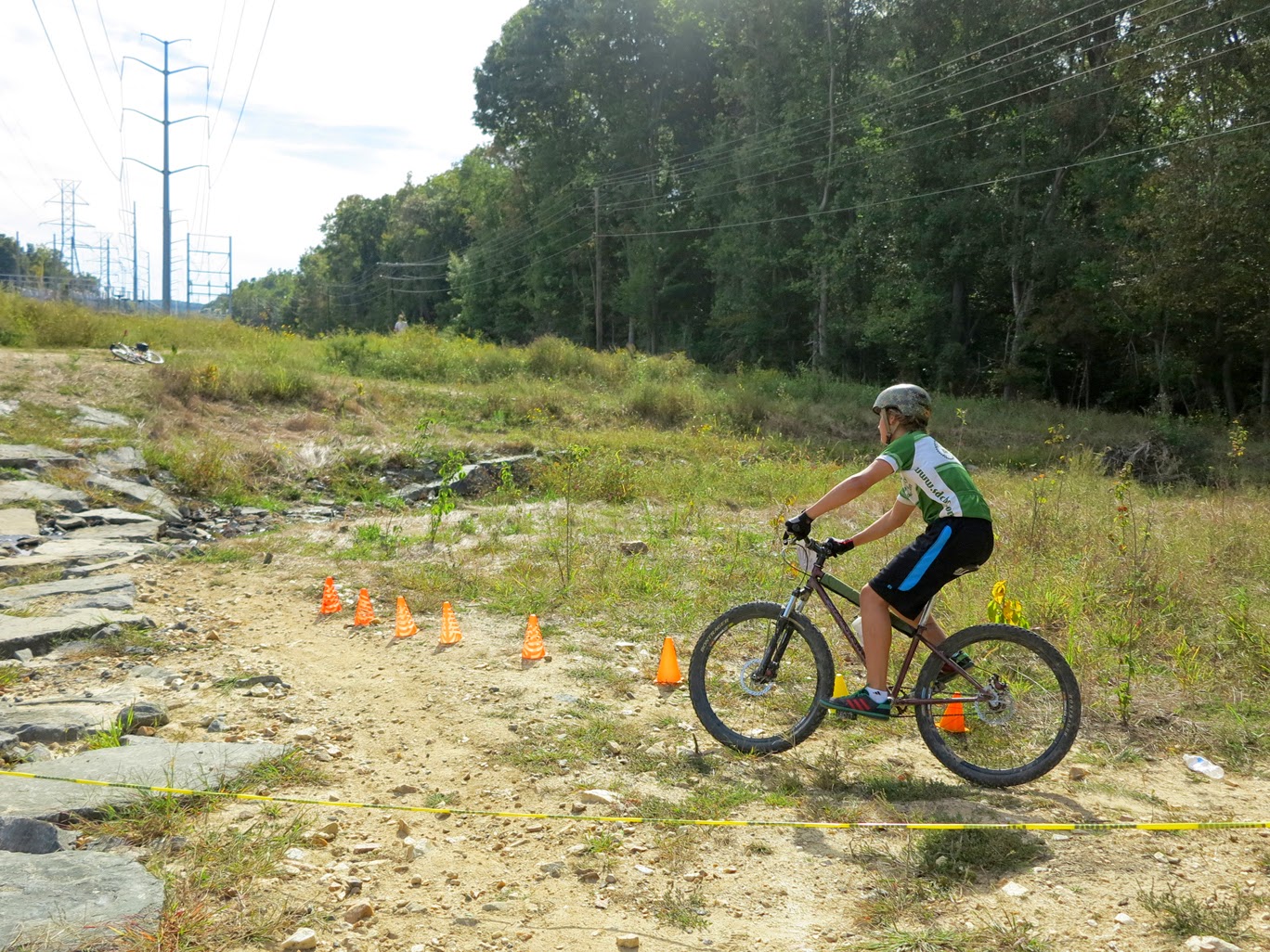 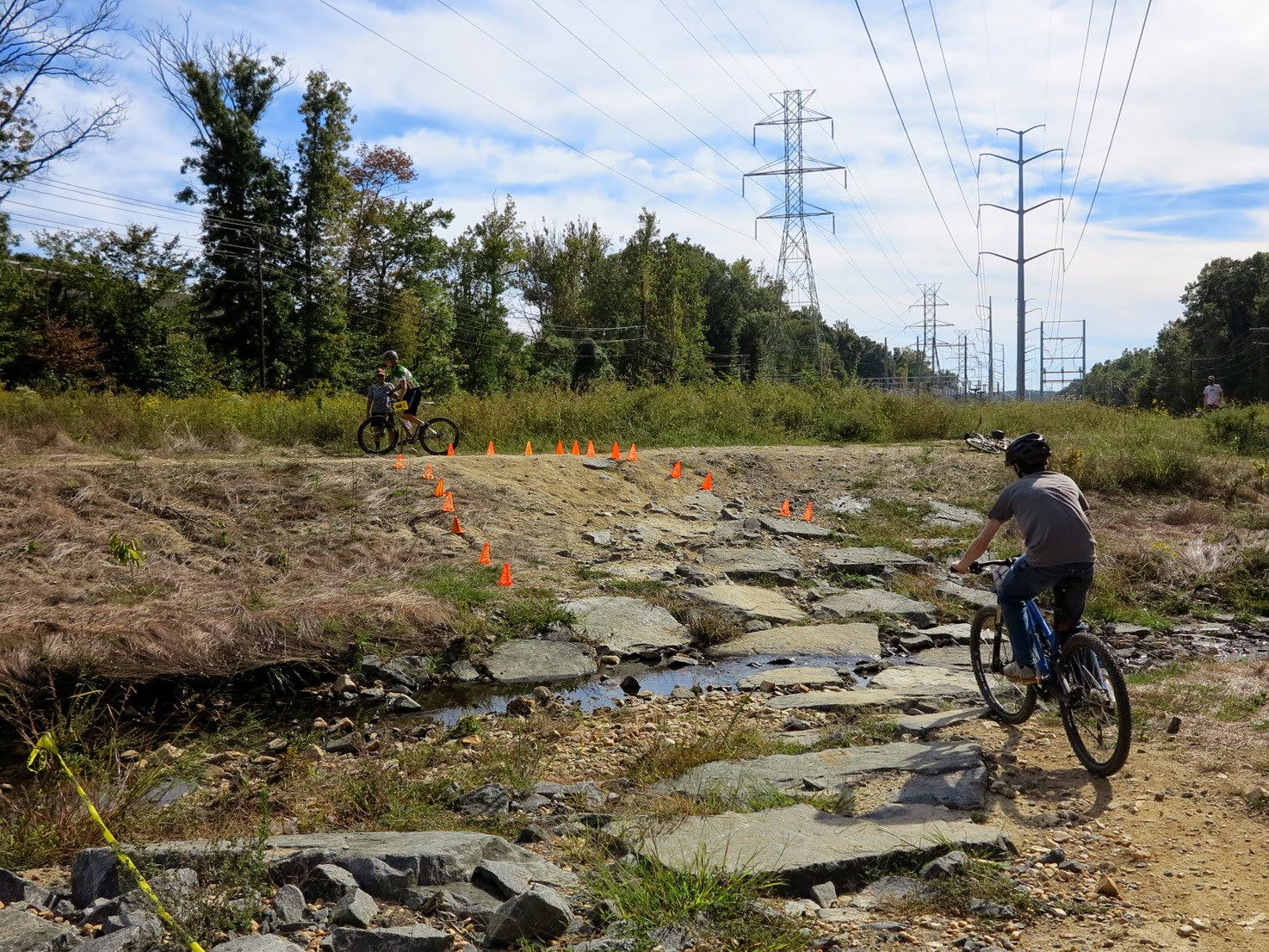 at different parts of the race there were different racers on Dean's tale
first one... then another
until finally the kid in blue jeans became the chase

he got close... but when I saw him... he was never in his shadow

threatening... but not quite

after snapping a few shots... just before Dean finished his first lap... I took off to find young Grant
it was getting to a point where Grant should be warming up
I know that he pre-rode the course
but where is he now?

sure enough... chill laxing in the car
smart place to be
relaxing in comfort
I instructed him to fuel up and warm up
and then to meet down at the line

with Grant suiting back up and eating some pre-race fuel... I was rushing back to the race course to try and catch Dean's finish
he was still a little bit out
none of the racers had finished
I was excited to see if he had held onto first

lots can happen
faster riders... crashing... mechanical... bonking
but none of these would be a concern until I started seeing other Juniors roll into the finish
the I saw him
a few turns ahead in the woods

AWESOME!
My 13 Year old son Dean won his category and was fastest over all for the day!
WOO HOO! 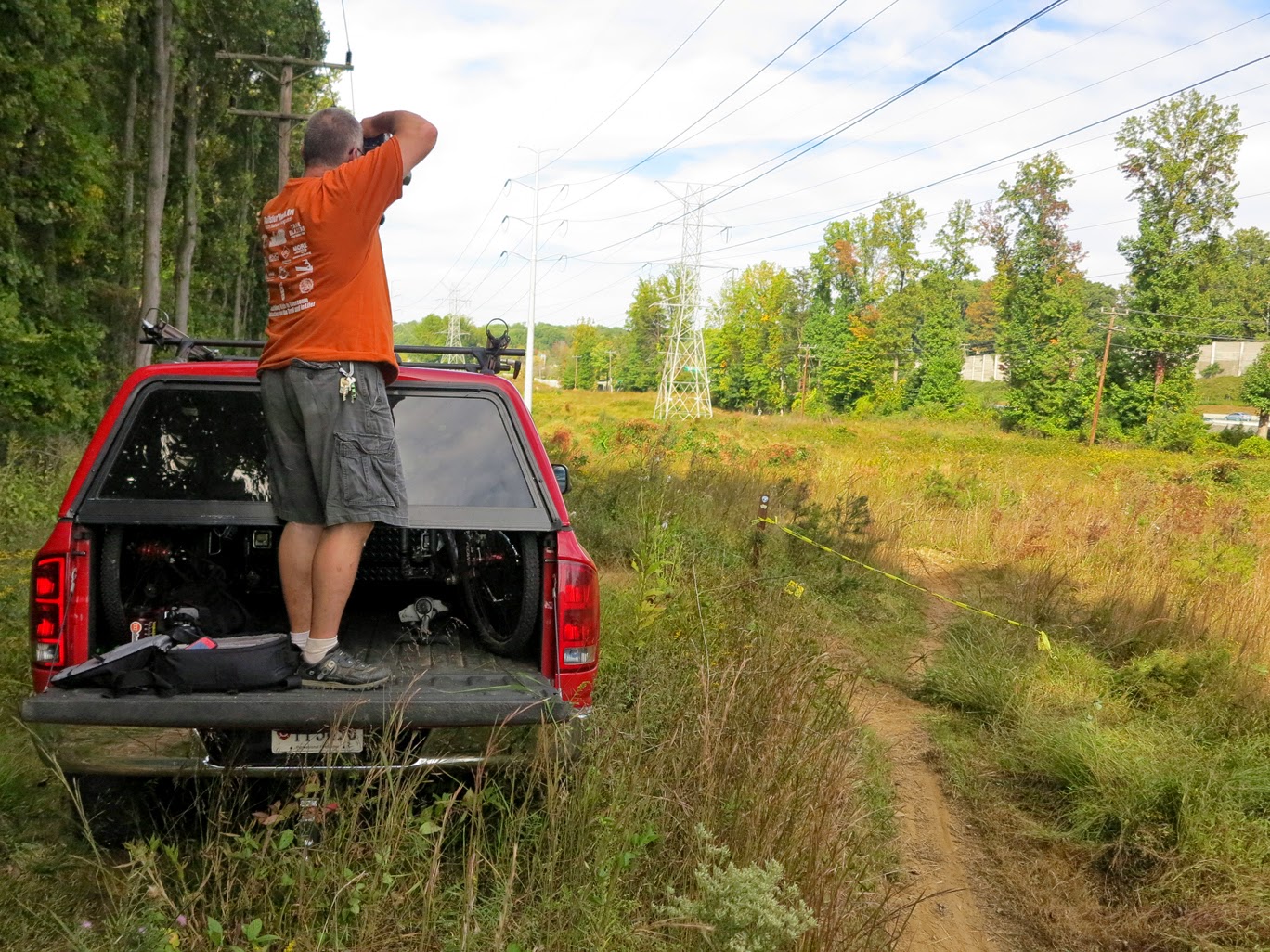 Grant was stoked... I had given him is pre-race pep talk
and he knew what he wanted to do
Dean and Grant have very different personalities
how they express themselves on the bike is very different
yet they each have their successes 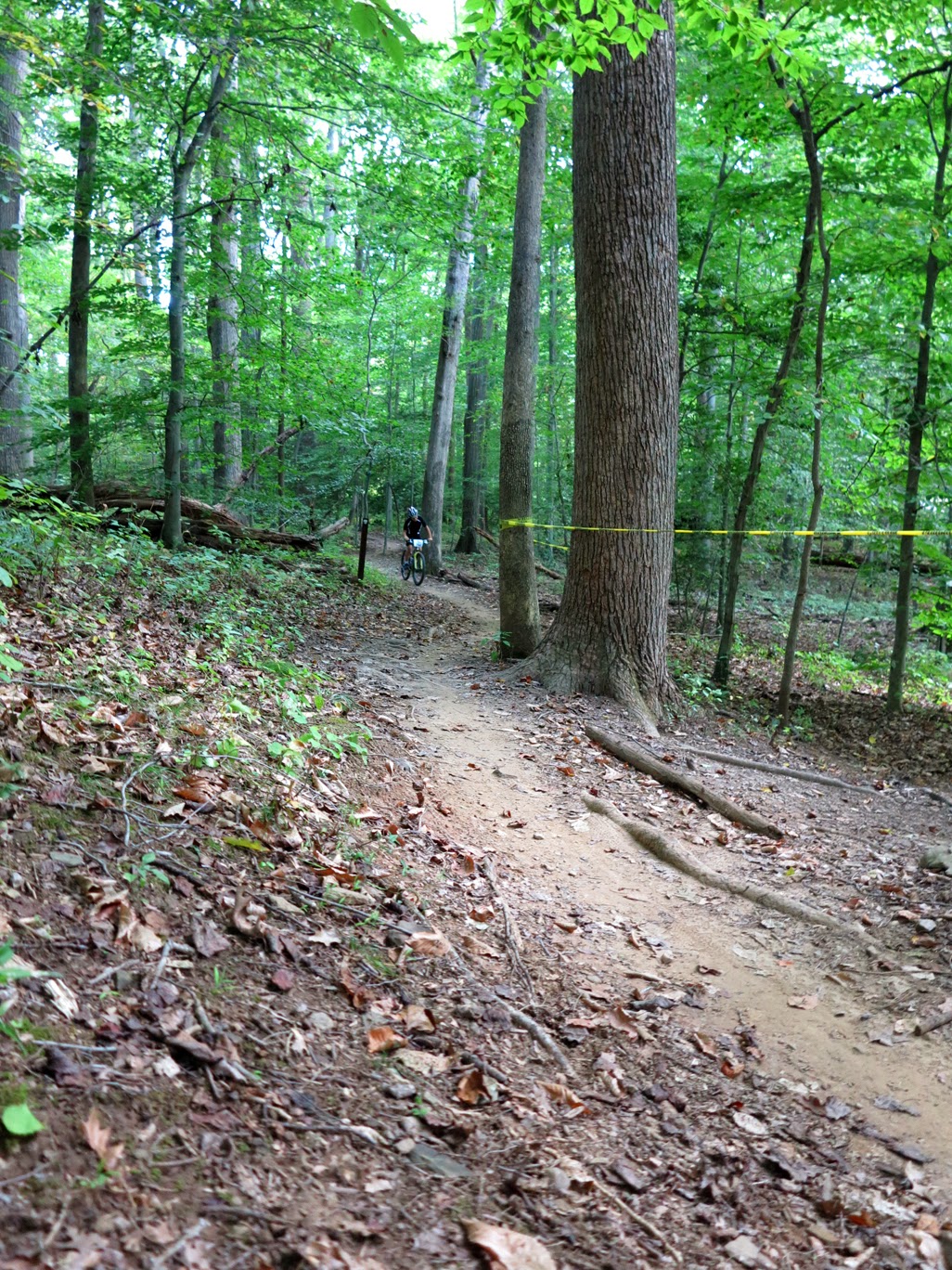 with Grant at the line I took to the woods with Dean
we did not see the start... but at first glance I could see that Grant had taken off fast and was in the lead
Dean and moved from one spot to another to try and get some photos and cheer

humorously... we took to a spot that was not on the course
we waited and we waited
but I missed the initial photo op

so we traversed the trail

out by the powerlines I waited to get at least one good shot
SNAP!
got it... it is posted below

I cheered... I was so excited to see Grant rocking the course
he was so focused
so intense
moving fast yet still in control

no one near him... yet self motivated to hammer fast forward 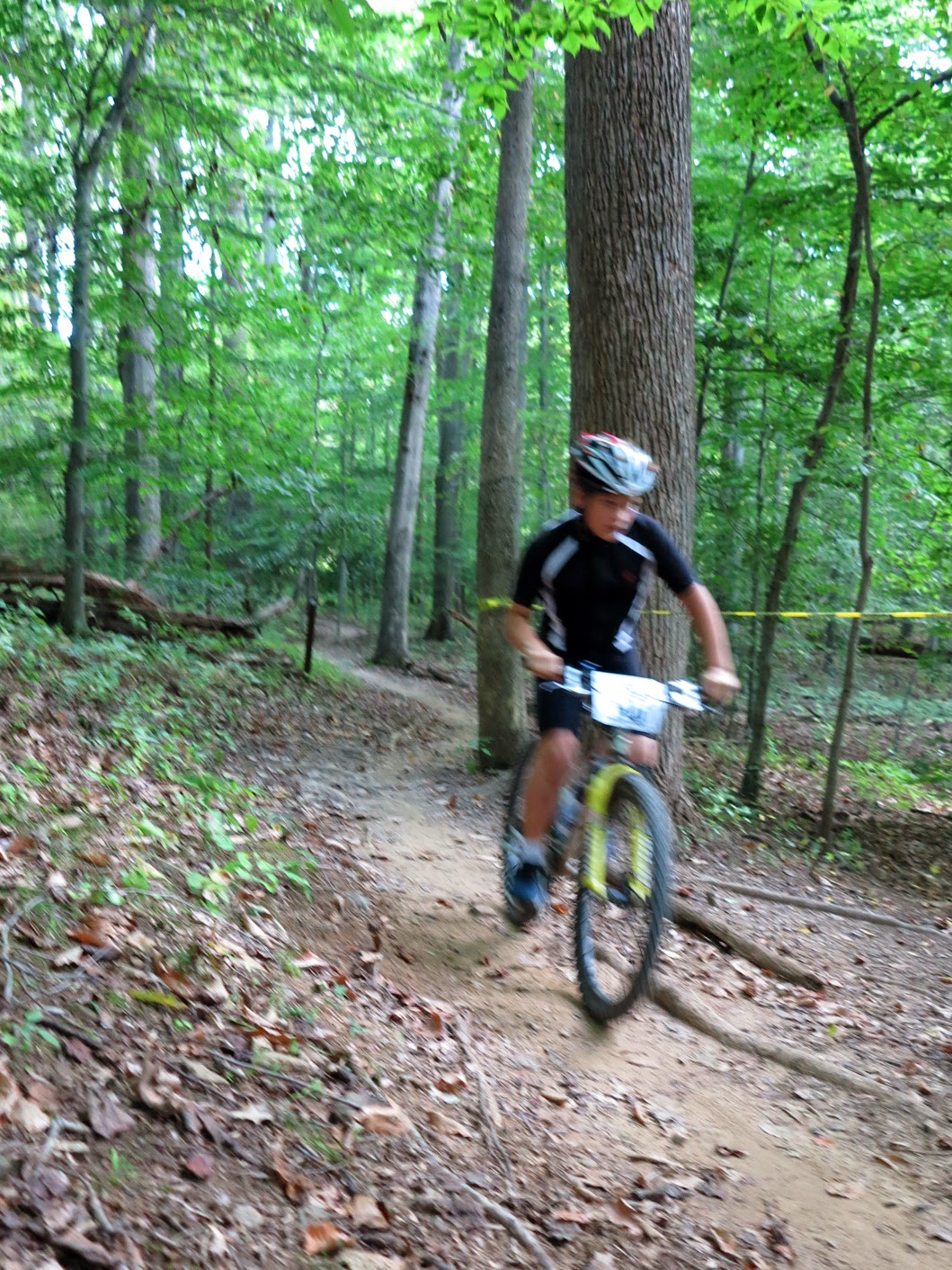 then before the awards... Dean and I went to retrieve our bikes from the woods
there was a moment of panic
I thought someone had moved them... worse yet... someone had stolen them
I usually do not jump to this conclusion
but I was confident I knew where we put them
but alas no... I had put them in spot one but forgot that we moved them to spot two
my bad 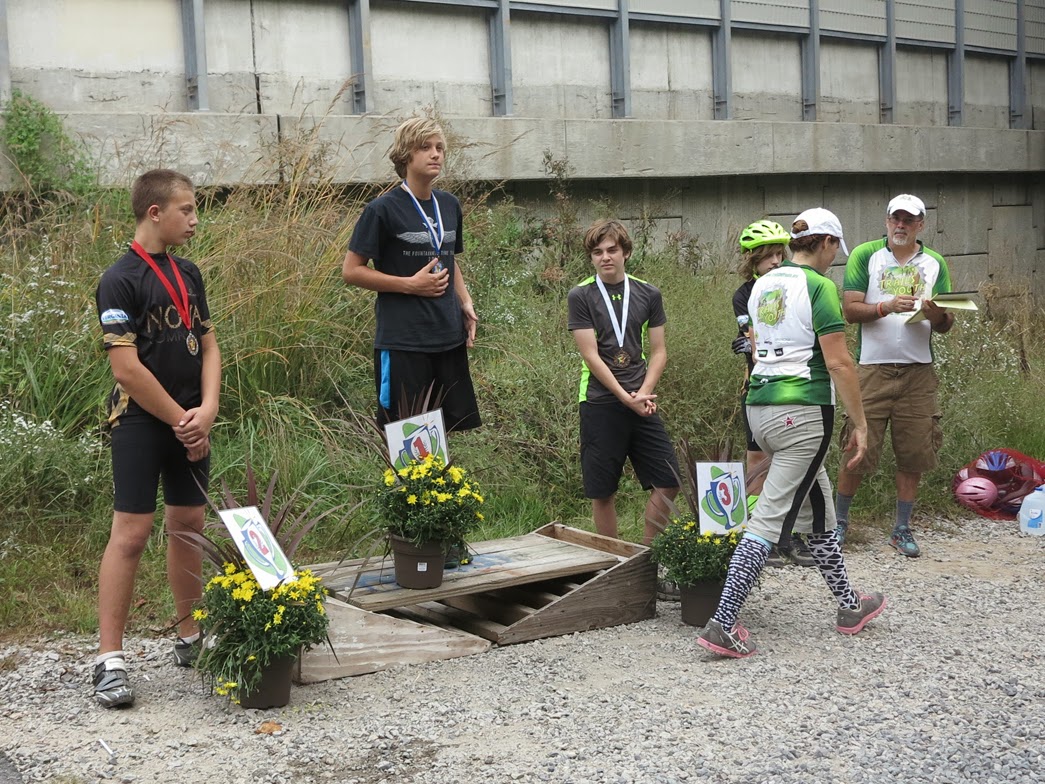 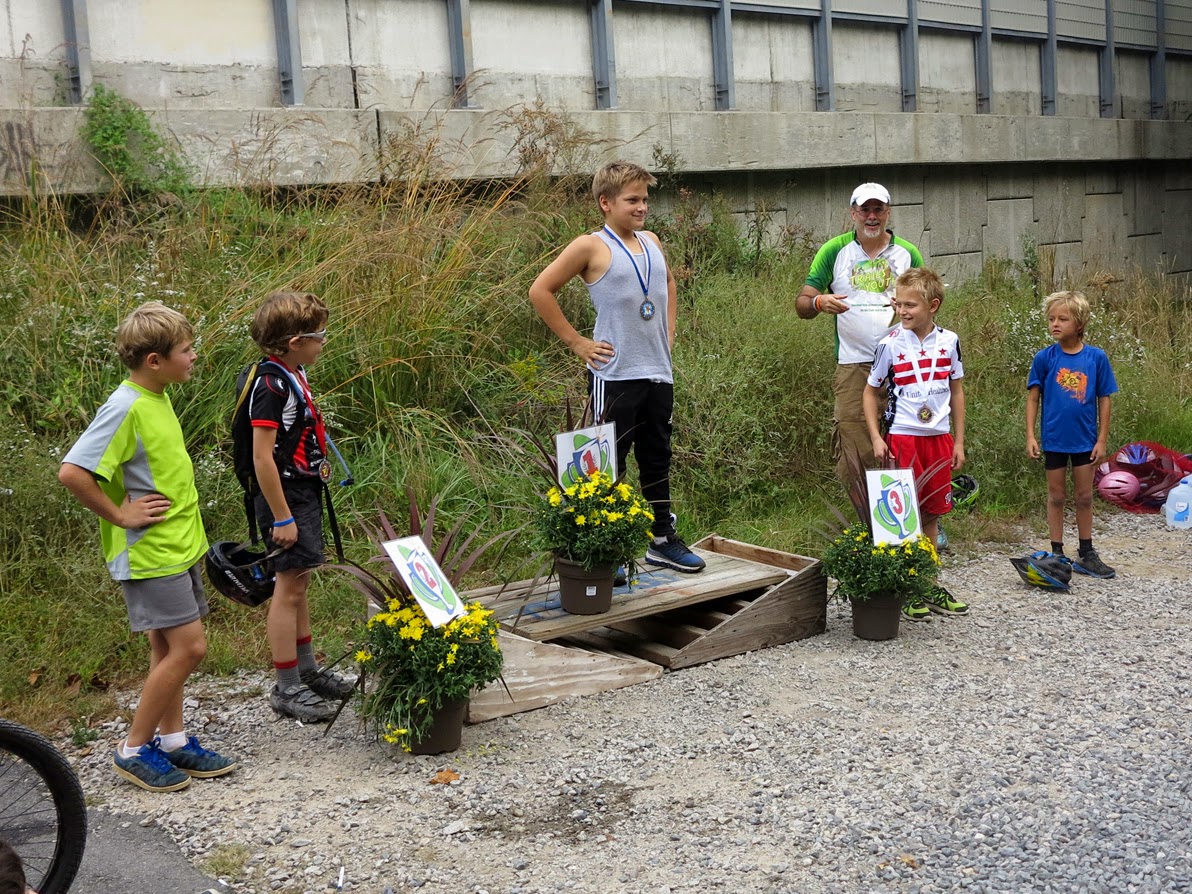 the boys expressed their personality differences on the podium
Dean shy and contained
Grant bold and in charge
I love them so much
http://gwadzilla.blogspot.com/search?q=podium
I would love them even if they did not make the podium 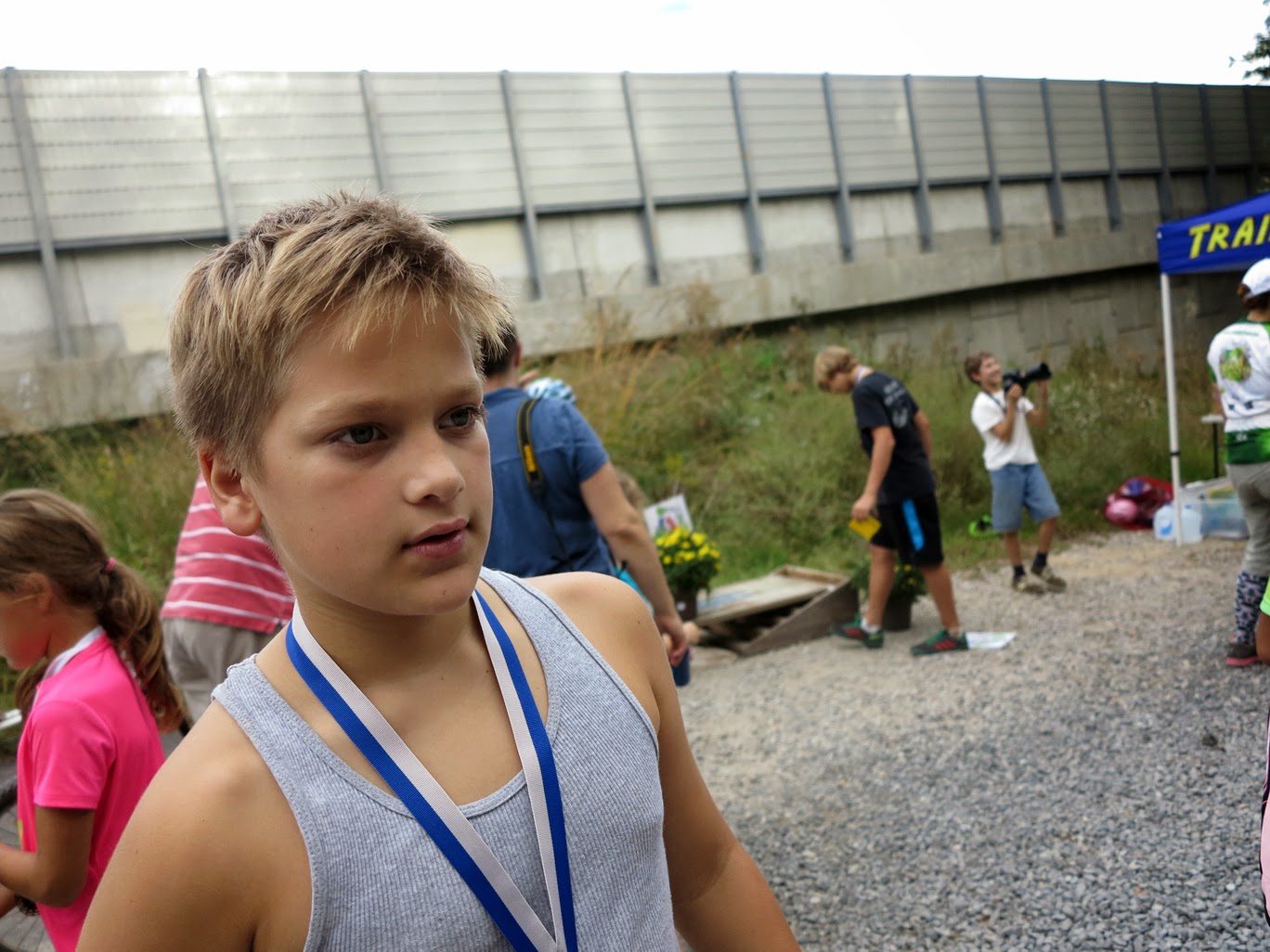 good times... good times for sure
bummer that the JBOMB is only one day
we need to search out other mountain bike options for the kids
I guess we need to take a measure of our intentions\opportunities for the MoCo Epic
http://gwadzilla.blogspot.com/search?q=moco 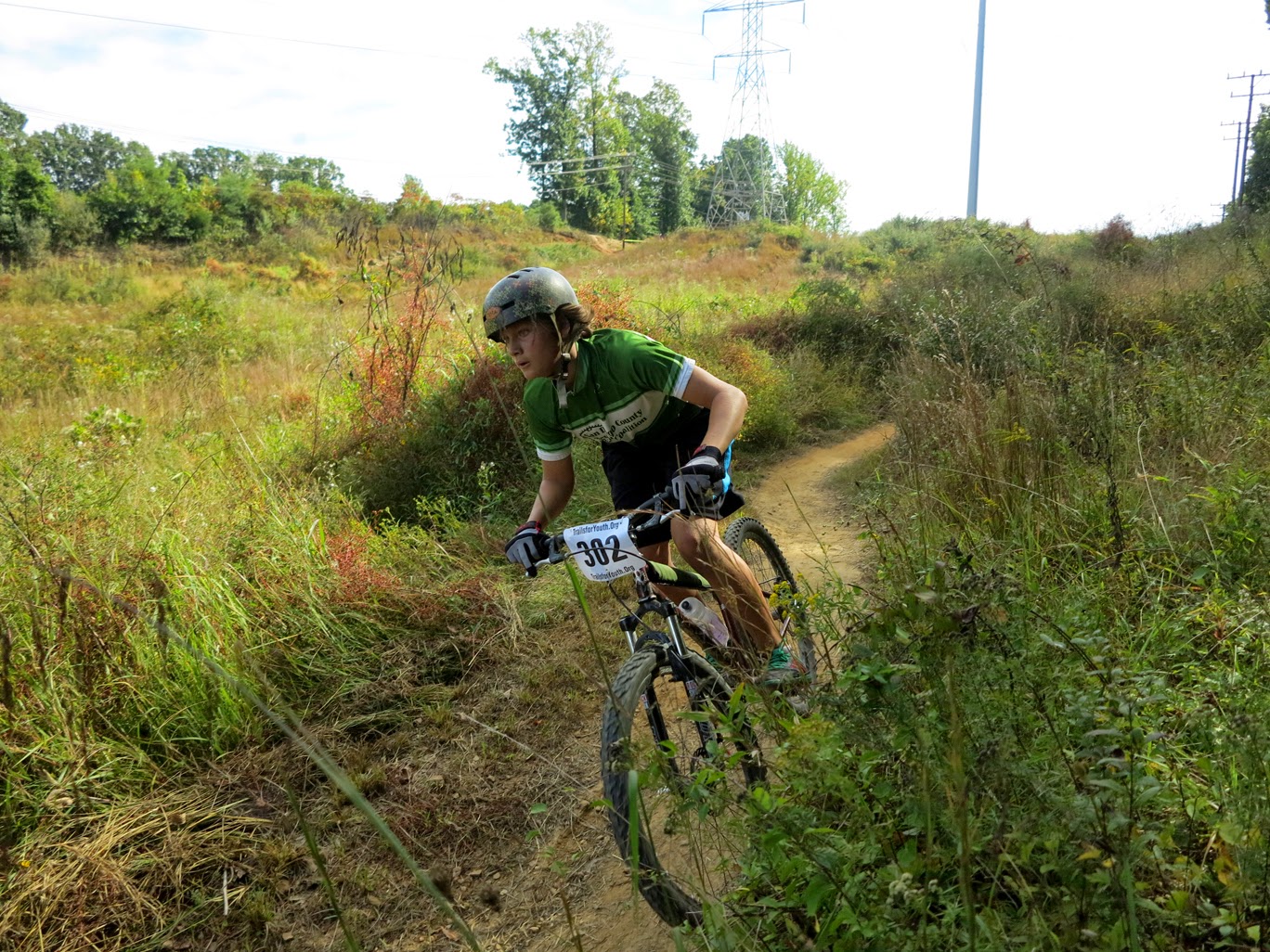 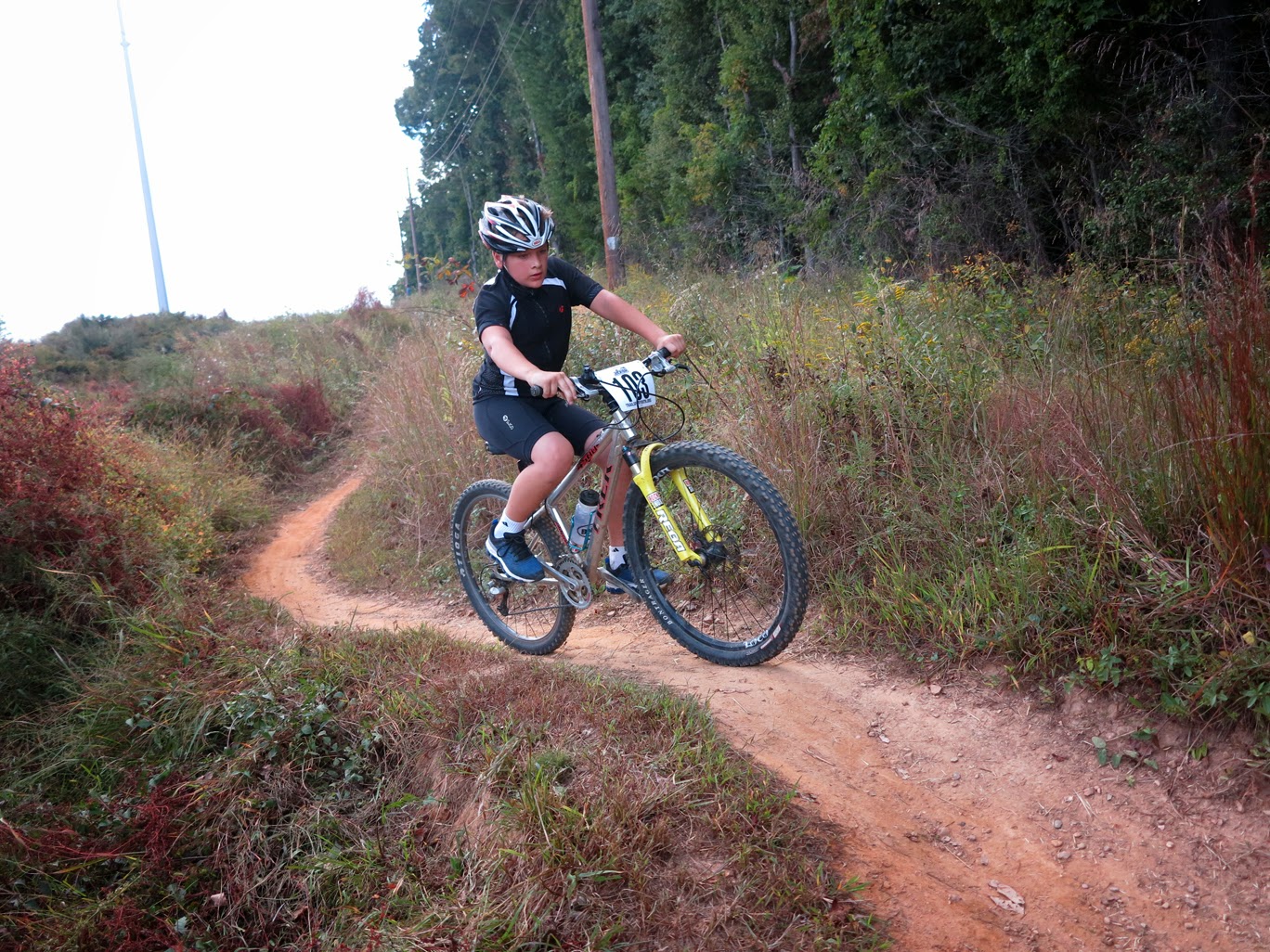 my best two shots of the day... just happen to be of two of my favorite people in the world