back from the 2014 More Fall Camping Trip
back from Wild and Wonderful West Virginia back at work
lets see what I can get on the page while I break for lunch
what have I written previously about this event? 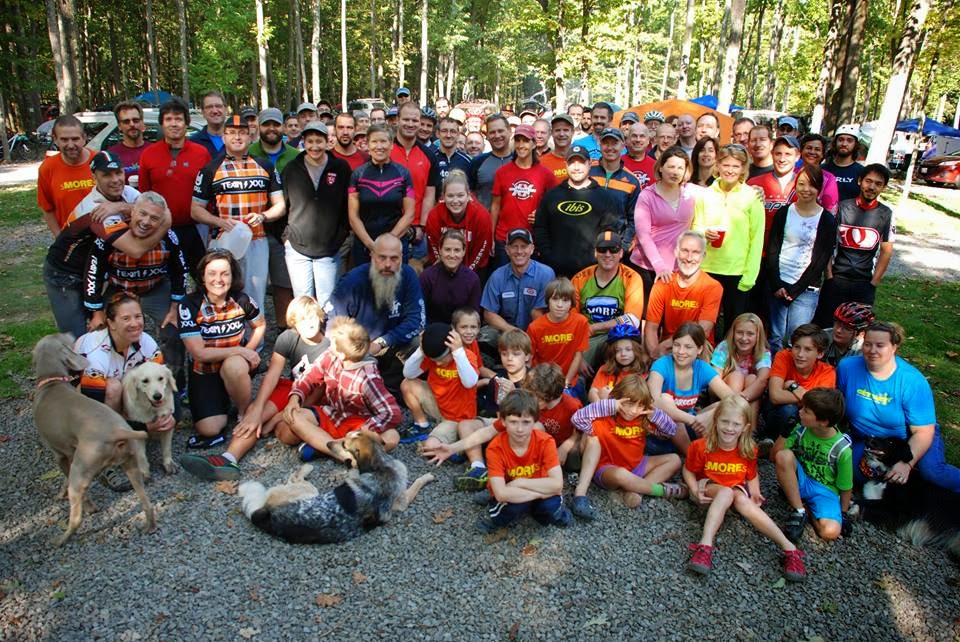 the exact date had to be weighed in against conflicts
of course... each of my boys have soccer games every weekend
then also...  I coach my younger son's soccer team every Saturday
then there were other events\activities that had to be considered

in the end... it was determined that taking the boys camping and mountain biking in WVA would be the best use of our time
they are not on "travel soccer"
their "rec" intensity is justified by their "variety pack" approach to sport

mountain biking is as important as soccer... and sadly... I do not get them out on their mountain bikes frequently enough

I was excited...
excited and anxious
it had been years since I had ridden at Big Bear Lake Campground near Hazelton West Virginia
and
it had also been since my elbow injury in Asheville NC in the spring since I had last ridden my bike on dirt

but really... the kids were excited!
other than video games... there is not much that my kids voice any enthusiasm about

yikes... trial by fire!
back on the mountain bike
but pointed towards some technical rock gardens
yes... exciting

not the most gentle re-introduction to trail riding
but... I figured my intensity would be buffered by my riding with the kids
so... it was decide... I would be going to West Virginia for the More Fall Camping Trip 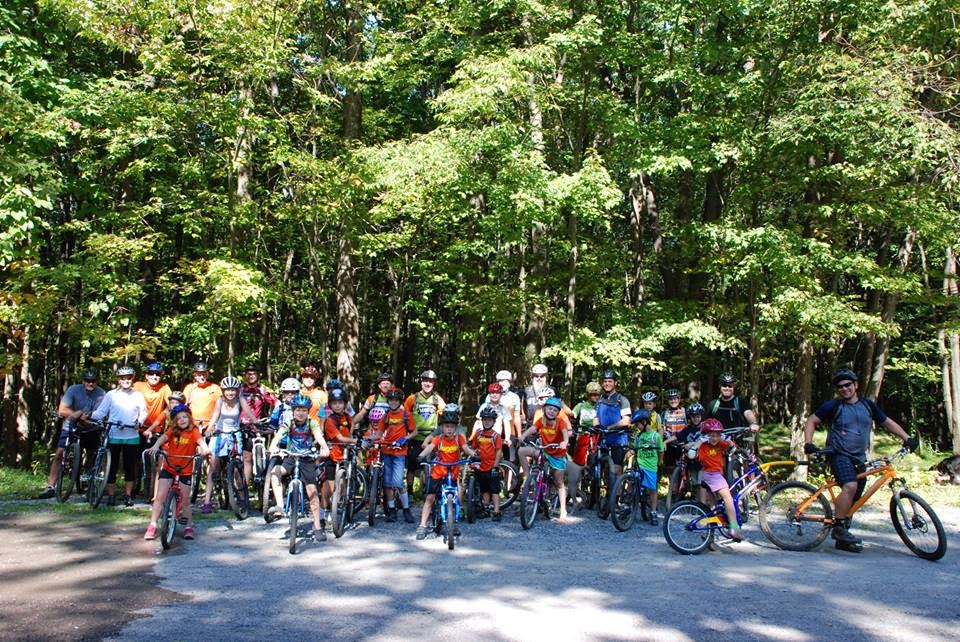 the work week went by fast
evenings were passing by and I was neglecting to focus on the weekend trip
until finally Thursday evening I started collecting gear for our trip
packing for three... me and my two boys
and well... the dog... but all he really needs is food and his leash

come Friday morning I started things slow...
walked the dogs then started looking at the bikes
Dean and I were bringing Single Speeds... which means air in the tires... lube on the chain... then maybe check the chain tension
then with Grant's geared bike  I had to put his rear wheel in the truing stand and then make a few standard adjustments
after adjusting his headset I noticed his fork was locked out
I played with things
really not much more than leaking the air out and putting air in and I thought I had things fixed with this basic removal and replacement of the proper air pressure
I felt like a hero... only later I would learn that my quick fix was quickly broken again

then I went to the grocery store to grab some stuff for the Saturday Night Pot Luck
yet somehow forgot about getting food for all the other meals of the weekend
sure I grabbed bananas, apples, lemonade, orange juice, and all sorts of sports energy food
yet somehow... not being a regular camper
I miss out on some of the subtleties

timing was perfect...
out of the grocery store and off to get the kids from school

grabbed one kid... then the other
the initial intent was to have things loaded up and ready to roll before pick up
then to grab each of the boys from school and head west straight from there
well... that is not how things played out

I was not ready... I was running late
go figure
I was late to register... I would be late to arrive
getting there before dark was not going to happen

leaving before traffic?
that was not going to happen either

finally...
I was ready to leave
I had every inch of my Honda Element packed...
there was barely enough room for people and a dog
but we fit
it turns out the only reason we all fit into my tightly packed car was because I forgot a few bags
I forgot my clothing bag... not my cycling clothing... but other clothing
and then also forgot a bag with towels and toilet-trees
either way... we were ready to roll out just about an hour later than planned
which is pretty much ontime with kids

our departure time sent us head on into Rush Hour traffic
luckily it was not too heavy
things were moving slowly... but moving slow is better than being stopped
the boys played their screens while I l got stuck with the task of driving

the drive was uneventful... which is actually what I seek when driving
I do not want any excess of excitement
no desire for close calls
just want to get from point a to point b with no drama

I had ten year old playing DJ with his iPhone... I got to hear more Green Day and Macklemore than I had ever heard before
the limited selection gave me greater familiarity of what my son is listening to these days

on Highway 68 I remembered not to be fooled by the Exit 29 in Maryland... but to be patient for the Exit 29 on I-68 in West Virginia

then finally... we arrived

it was dark... but not late
we stopped at the security gate and received directions to our campground
when we pulled into the Beaver Creek Campground there was a flurry of activity
lots of people were settled in
while there were many others still putting the finishing touches on their camp set ups 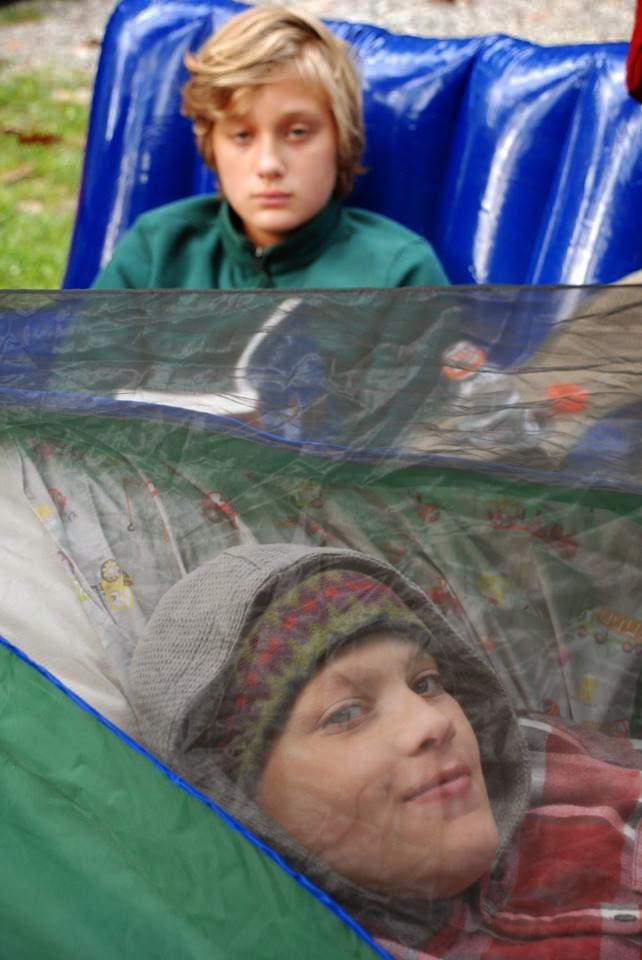 then they got distracted again
they saw that the tent box had the hammock tent
so... they got started on hanging the tent hammock
after the boys successfully hung one hammock I alerted them to the the second tent hammock
then suggested that they set things up "double decker"
one hammock above the other
like the Skipper and Gilligan... only they have never seen Gilligan's Island so that reference fell on deaf ears

the hammocks became their sanctuary
rather than joining the SMORES in their game of SLENDERMAN
my boys got some LED headlamps and pulled out their books
the hammocks created perfect little coves for them to settle down with a book
I was torn... I wanted them to interact with the other children.. but these were books... not electronic devices... so I let them stay their course

then with the camp set up... I got to settle in around the campfire with a beer

after a night of a few too many beers and maybe some unnecessary Bourbon I woke slowly
there was already a great deal of activity around the camp ground
there was a flurry of kid activity
and the campers with a clue were making coffee and other morning treats
I pulled out some orange juice and poured a few glasses for me and my boys
then handed them each a banana and then a small Gatorade
seemed like good fuel to start the day
in a bit of a haze I scratched my head and thought about coffee
where could I get coffee?
who would be generous enough to get me some coffee?
is there a diner or a corner store in close proximity?

I was able to mooch some coffee as I milled about
then I handed my boys their camping plates and utensils and we queued up for some breakfast
ah... provided breakfast
I had centered my thoughts around two meals
the provided breakfast and the pot luck dinner

but what about everything else?
it was clear that my grocery store run had some major gaps

luckily this day had the MORE supplied breakfast

we all ate hearty a breakfast
bacon... eggs, bagels, and biscuits and gravy
the sausage and gravy on top of biscuits was AMAZING
a great way to start the day
crumpled bacon and some eggs in the mix... YUM!
a smart way to fuel up before an epic day on the bike 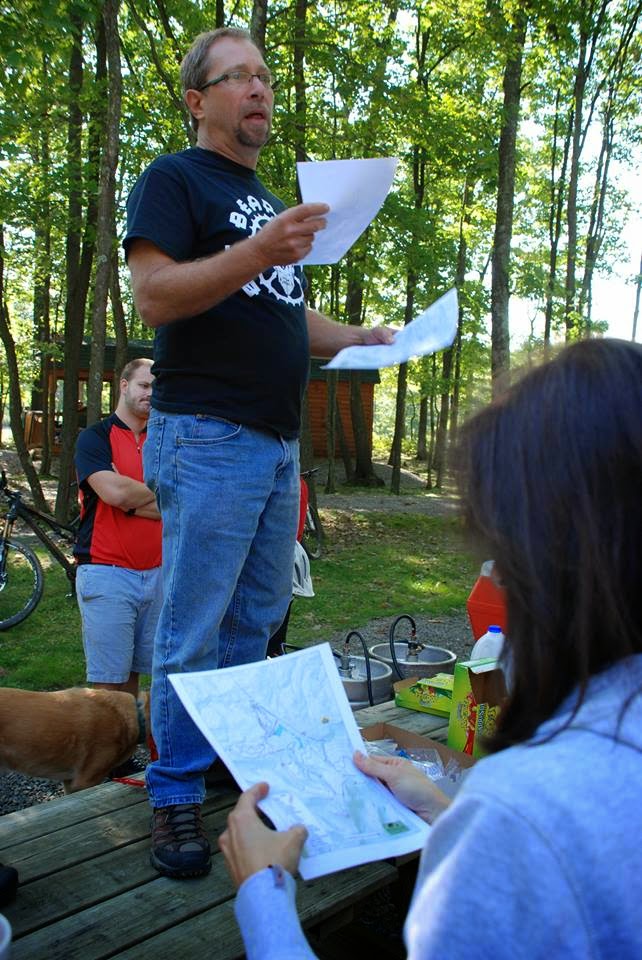 after breakfast... both first and second approach there was a stall for a Fall Camping Trip photo and then some discussion about local trail options
everyone gathered in different groups to the hit the trails at varying intensities

as a father with two young boys I approached the SMORES group
there was talk about three groups
but when we got together that group sounded more like one
I offered up to lead a faster kid group
but did not have any takers
so... I left out with the SMORES with the intention to split off the Black Trail onto the Yellow Trail
the Yellow Trail being the Big Bear Race Loop 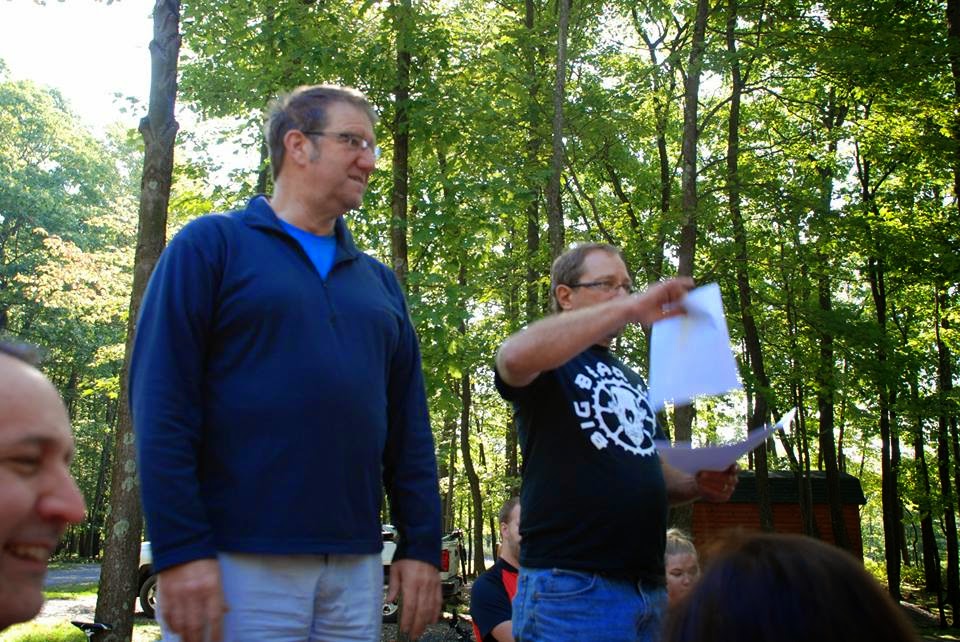 more on this later... but the descrepancy in skill between my 10 and 13 year old sons had the older one waiting more than he wanted to wait and had the younger one working harder than he wanted to work
so... young Grant turned around early while Dean and I pressed on
Dean and I hammered on our Single Speeds
it impressed me how strong my 13 year old son is on the bike
he was choosing good lines and keeping up a solid pace
we stopped more for the dog to cool down, catch his breath, and drink some water from the less than frequent creek or puddle
on that ride Dean had one almost serious crash
and I broke my Niner Sir Nine frame at the drop out
we returned to the campground and I sent the boys to the lake while I started to prep my contribution to the pot luck dinner 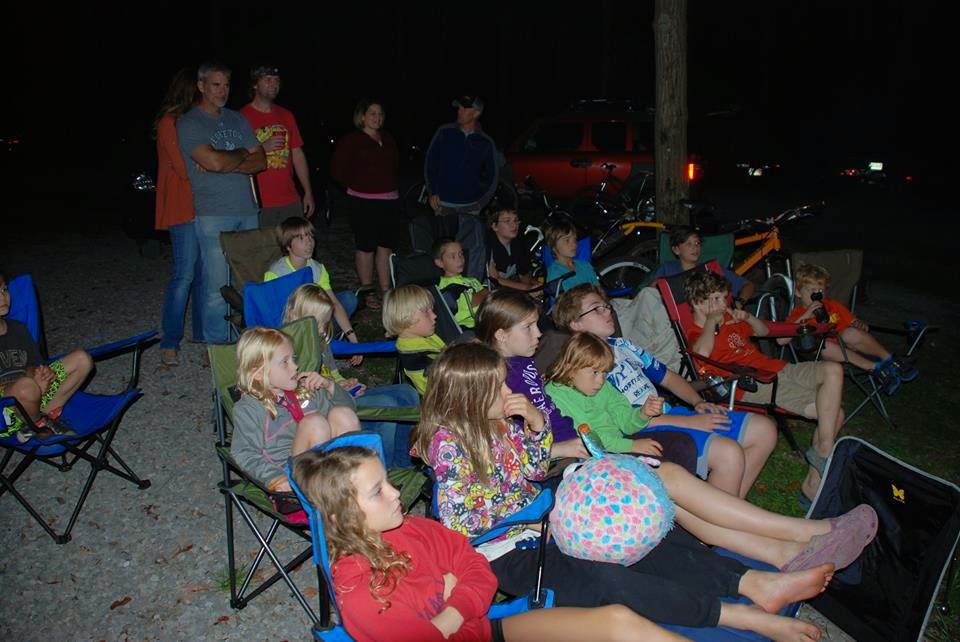 there was drinking...
enough drinking that we finished three kegs
there was drinking and I managed to get Tom Newton to set off some fireworks
he was hesitant in an effort to be respectful
that night came to a close without any casualties
then the morning arrived without much warning
again I woke slower than the rest of the crew
allowing people time to start up their coffee
me returning shaking my cup
there was threat of rain
my frame was broken
Grant was not feeling 100 Percent
but Dean was ready to ride
I initiated that the boys rally with the other kids
which they did... they rode out to the jump park and some other neighboring trails
while I started tear down

it was an EPIC weekend
it was about the whole weekend
not so much just the ride
the ride was awesome... I would have loved to ride again on Sunday
but really
the weekend was a success all around
even with the broken frame
a frame that I have high hopes will be warrantied by Niner

another MORE Fall Camping Trip in the books
so much fun... if life permits
expect us back for next year

thanks Phil and all the others whole worked so hard to make this weekend happen
it is really a highlight of the season every year! 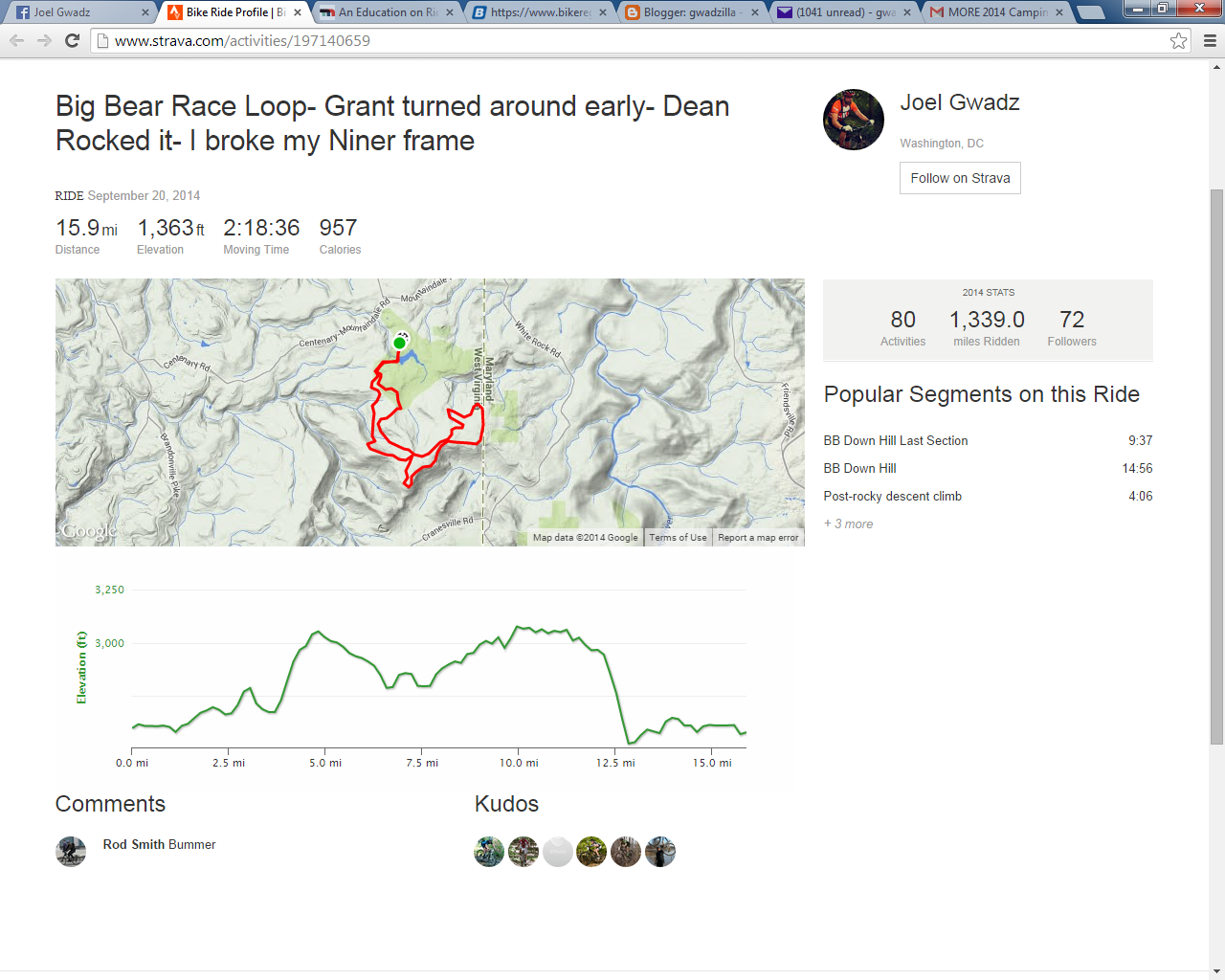