I like the update... the initial report sounded so out of character 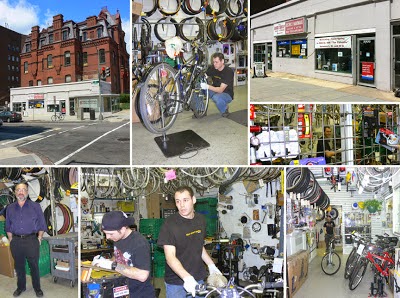 the above shot is from District Hardware at its old location just off Dupont Circle
http://gwadzilla.blogspot.com/search?q=district
(great randomness there... including my Letter to the First Lady)

she bought the bike... a rack... and then a generator light
she had everything going... but not quite as good as it could be
so... after some Internet research... she took her bike to the shop

the shop she selected was The Bike Station at Union Station

well... her review to me was less than favorable
she did not get the attention or the attitude she expected
there was talk that what she needed done could not be done
when she told me this... I asked if she knew who the mechanic was
and when she told me it was Peter... I was surprised

she had to return to get her bike the next day... I told her that she should talk to Peter
that Peter has a great reputation for going above and beyond
a lover of fixing things rather than throwing them away
also a person who has a long history of being overtly friendly to customers... especially those with an old beater bike in need

well... she returned to the shop
then after that she gave an update
maybe she caught Peter at a "bad" moment
as it turns out... he was able to resolve her issues with her bike
he got everything going even with his prior hesitation
then also... he was also the Peter that I mentioned above
she was all smiles
and well... so was I

thanks peter for being you!