Winter and its Gifts 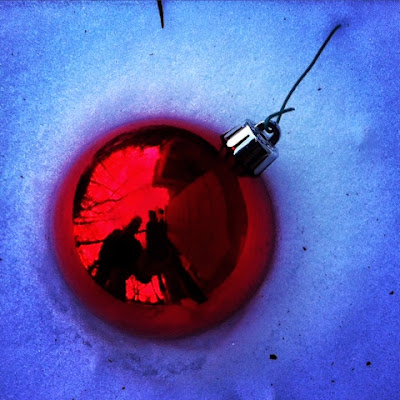 Winter and its Gifts
snow and ice
yes... it is snow and ice that make winter a wonderland
if it is going to be winter... give me a winter wonderland

last week we got a taste of both
snow... we got a little more than a dusting
no snow biking for me
but I did enjoy hiking with the dog and the boys in the woods of Rock Creek Park with the snow on the ground

sure enough... the ice was solid
which offered up the opportunity to go skating
unfortunately.... the boys and their growing feet have them currently without skates
but I have skates and the boys are content just "playing" on the ice
so... on Saturday we loaded up the car and took the short cross town drive to the canal by Chain Bridge 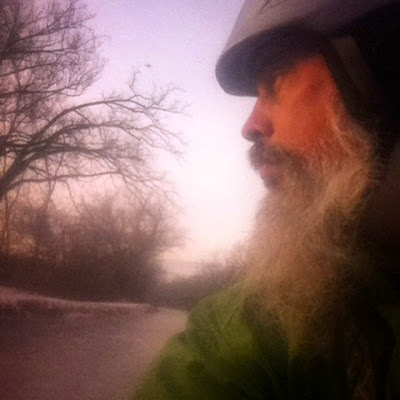 so... onto the ice with Dean, Grant, and Didg
I did some up and back with the skates on
exploring the frozen canal
pleased to see that the canal was MORE frozen than I had ever witnessed

I pulled off the skates and the boys and I all snacked on some green apples, granola bars, and cold water before we started to explore the woods in between the towpath and the Potomac

it was quite the winter adventure
the snacks were good... vital in fact
but lunch
it was time to start thinking lunch

so... we cut the canal adventure short so that we could get lunch, have Dean start some homework, and then catch the Hobbit movie in the evening

the Hobbit film was good... maybe better than the first Hobbit movie

ah... then Sunday came
on this day the boys left off for Ski Liberty with their mother
this freed me up to handle some stuff around the house and do whatever I wanted to do

Mike was able to get things working... best possible
it was recommended that I upgrade my Surly hubs with the
Surly ULTRA New Hubs
http://surlybikes.com/parts/wheels/hubs

Sunday allowed me to wake up slowly...
hugged the pillow for a little longer than I would have been able to do if the boys were still in the house
slow out of the gate I walked the dog a few minutes later than usual
although I planned to take the dog with me on my afternoon adventure
I could not ignore Didg's pull to get off the standard loop and hit the Melvin Hazen trail

the ice was good... but getting soft

I weighed my options
bike ride or ice skate?

not having ice skating as an option every weekend I opted for skates over bike
there was a second consideration to just hit a small patch of ice on Piney Branch Parkway
but that seemed more like a kiddie option than an adult option
so... the canal was the plan
I loaded the dog and skates in the Honda Element and pointed across town
without traffic the canal is really no more than 20 minutes from home

at a stop light I checked Dark Sky again on the iPhone
it gave me an accurate account of the weather as I got closer to the canal
sure enough... it was above freezing
colder closer to the Potomac than it was near home
but still far from freezing 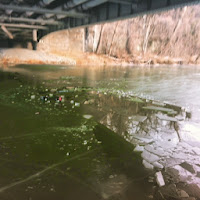 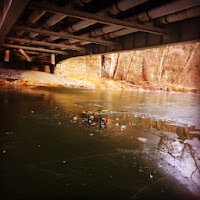 sure enough...
what was solid on Saturday was thin on Sunday
a Park Police helicopter overhead gave a reminder of the dangers

stiff from the day prior I warmed up slowly
not being an expert skater I took a measure of the dangers
to my pleasure... there were some soft spots
but not much cracking and not too many danger spots

but how would I get passed?
I waited for some skaters with a dog to come forward
they waited for me and I waited for them
it seemed like the ice in the center was thick enough to skate across

maybe not so shrewdly
I decided to skate under the bridge to the inside of the large gapping hole
slow and smooth I started under the bridge
things were fine... then there was a cracking sound... then it happened

slow and steady I calmly crawled my way to thicker ice

whoa... that was close
could have been worse
much worse
tragically worse
or at least uncomfortably worse

well...
today it is rainy and warm
I was right to take advantage of the skate option when it presented itself 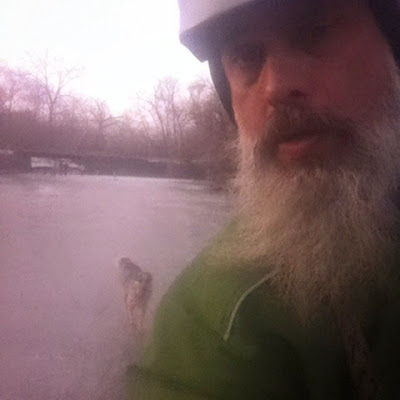 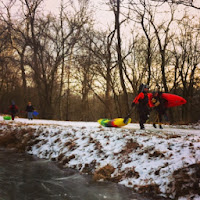 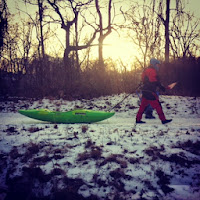