yes, I over reacted... yes... my behavior was over the top... but it was the classic situation of inappropriate action and over reaction 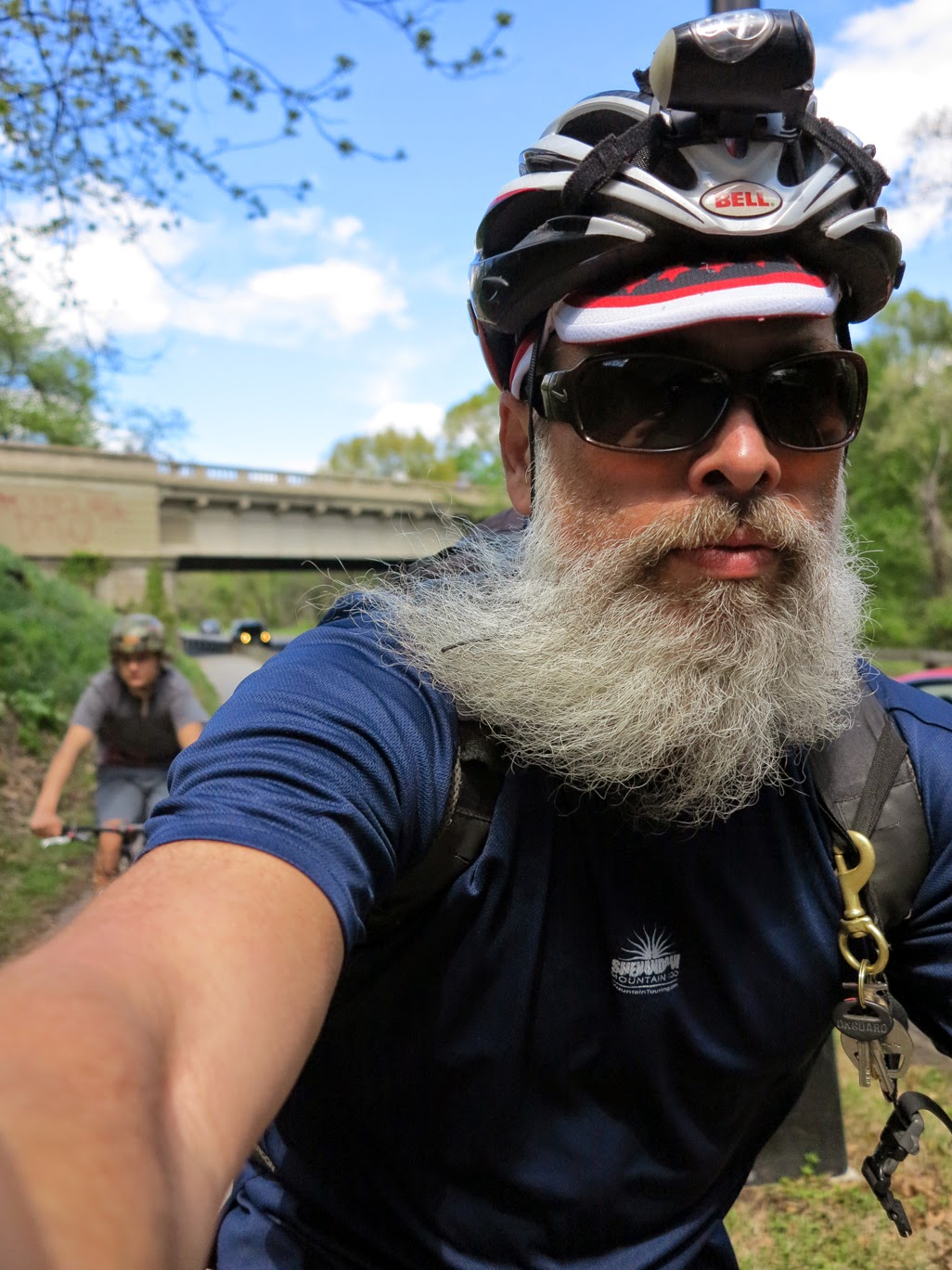 Outside Magazine piece on PARENTING

this post is from last weekend... this weekend has been awesome
last weekend was awesome
need to keep the momentum
awesome weekends make for an awesome life

this weekend past I proposed a bike ride with the boys
this notion of proposing a bike ride goes against my parenting rule of "don't ask... tell"
so often I think I have a great idea for an adventure with the kids
I propose this option and they shoot it down 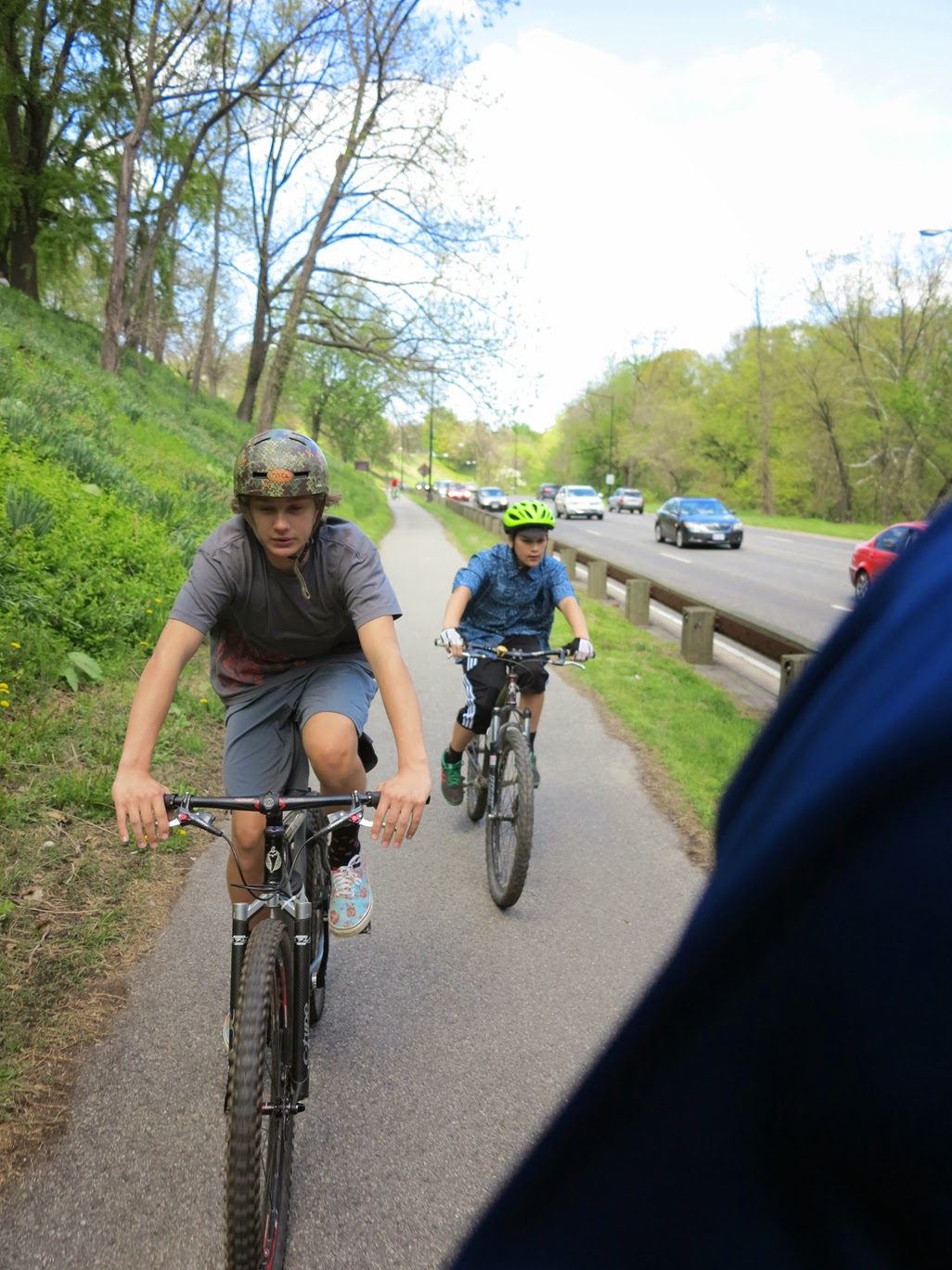 "Do you want to go hike the Billy Goat Trail with the dog?


or
Go for a mountain bike Ride?
or
Help me clean the garage and basement followed by doing some yard work?" 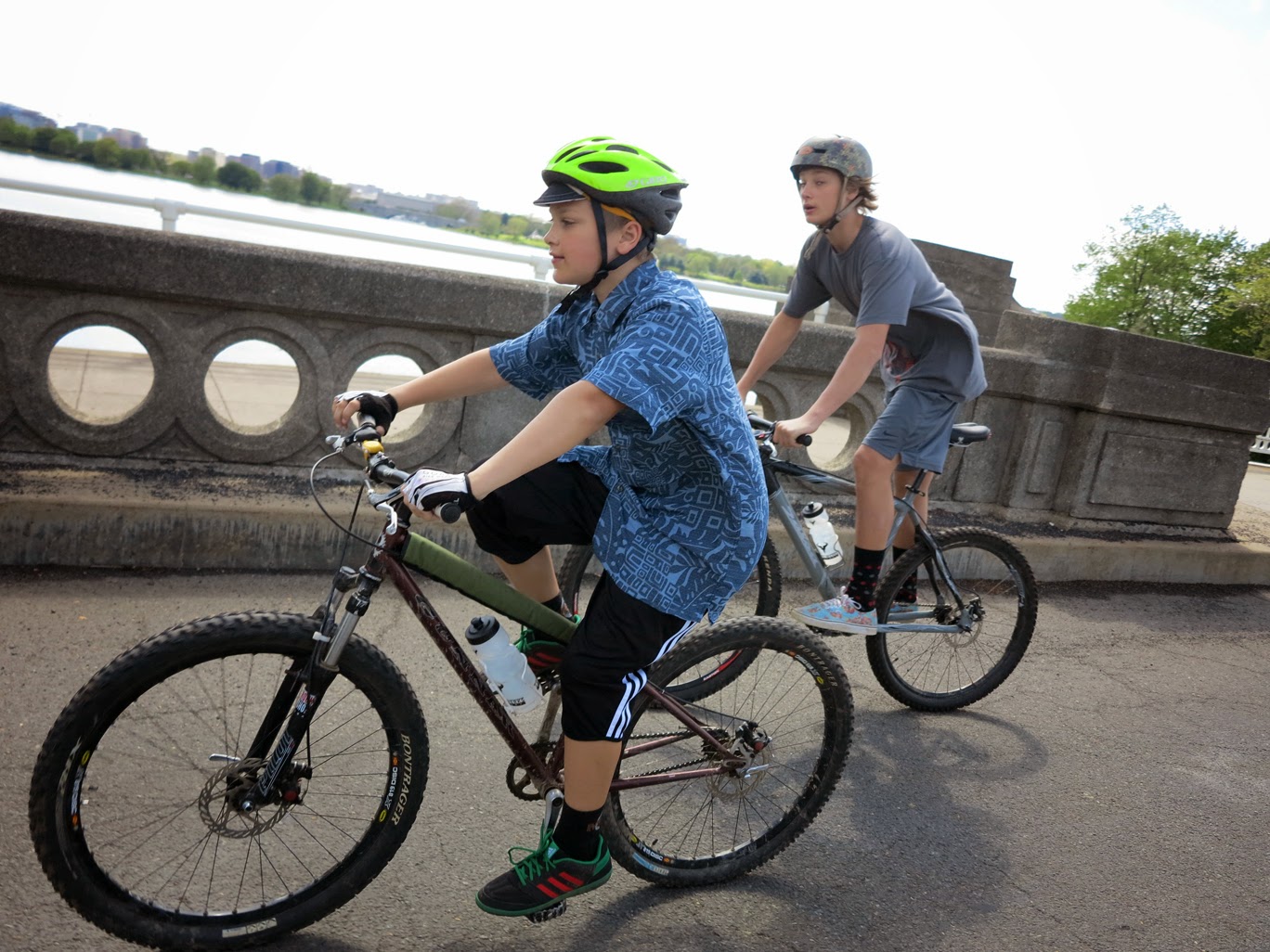 to my surprise I got a response...
it is rare that either of my boys respond to my text messages
what was even more shocking... each of the boys were in moderate agreement with the urban bike ride with a stop for some time at the driving range at the golf course at Hains Point

earlier that week I had seen Chris Merriam... Chris said my bike would be ready this weekend
a few months earlier I had sent out a request to my mountain bike team\DCMTB to see if anyone had an old single speed mountain bike that they would be willing to let go on the cheap
I got a few responses... all of them good deals... none of which fell into my desired price range

until Eric Loach chimmed in

as it turns out Eric had his old Salsa single speed in parts with no intention to build it back up
I asked about price... Eric did not want any money
I offered a bottle of Bourbon... the same trade I made for a Xylophone with fellow mountain biker\photographer Lee Dier
Eric turned down the trade for Bourbon and offered the bike up at no charge 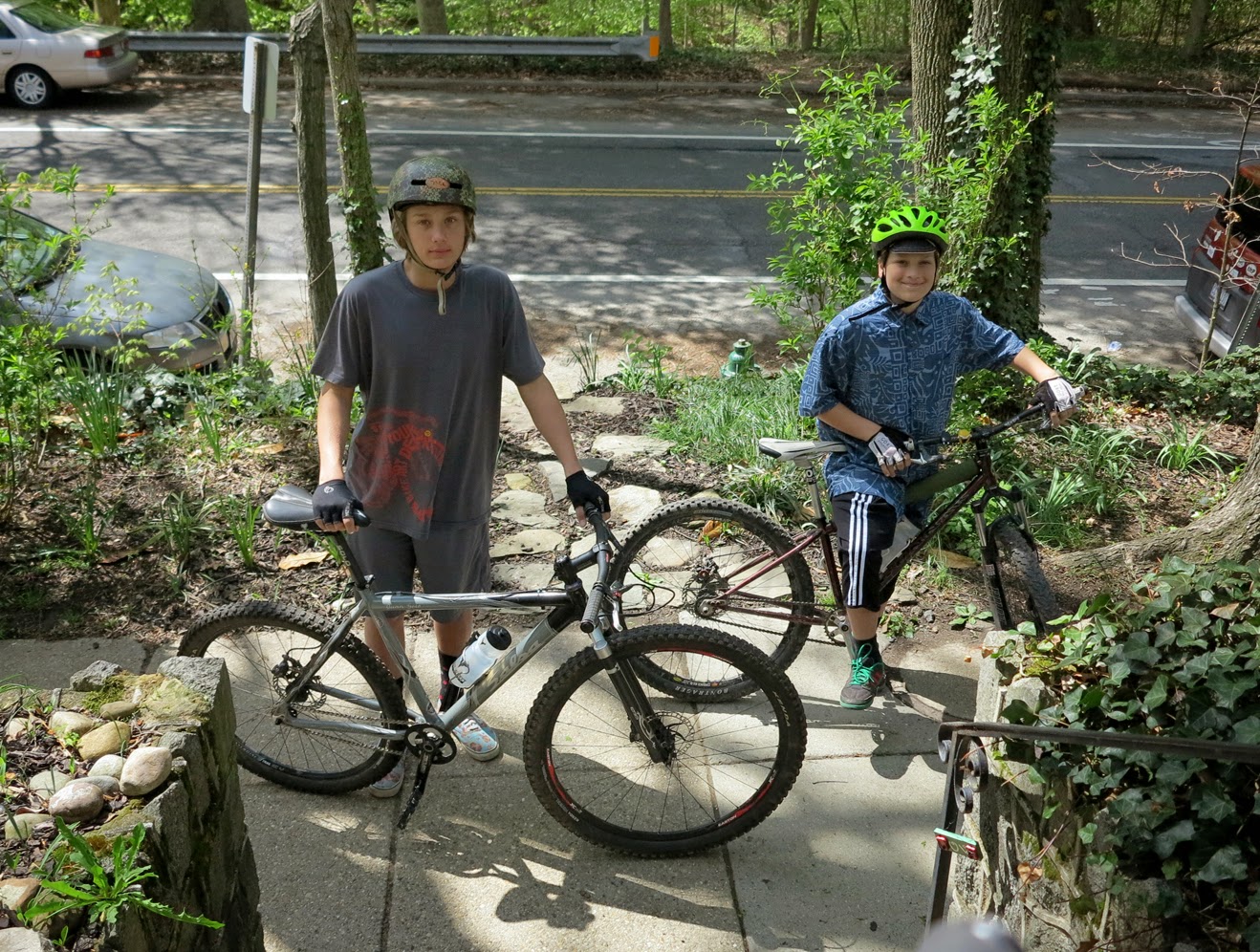 HOLY SHIT!
when I stopped by Chris Merriam's house to get this bike I was amazed at how beautiful the bike was
Chris handled a beautiful build
and
Eric had given me a beautiful bike for my son Dean! 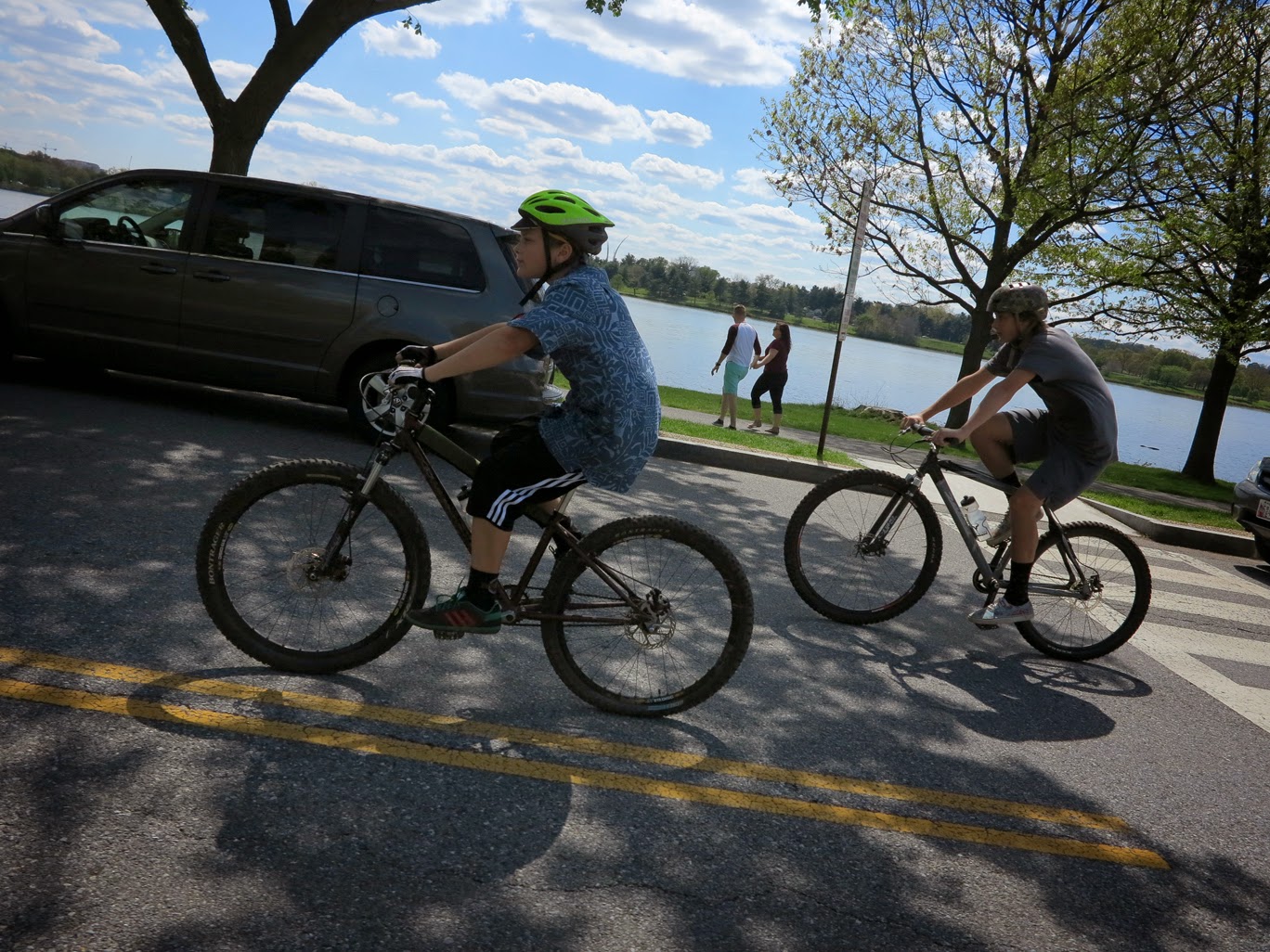 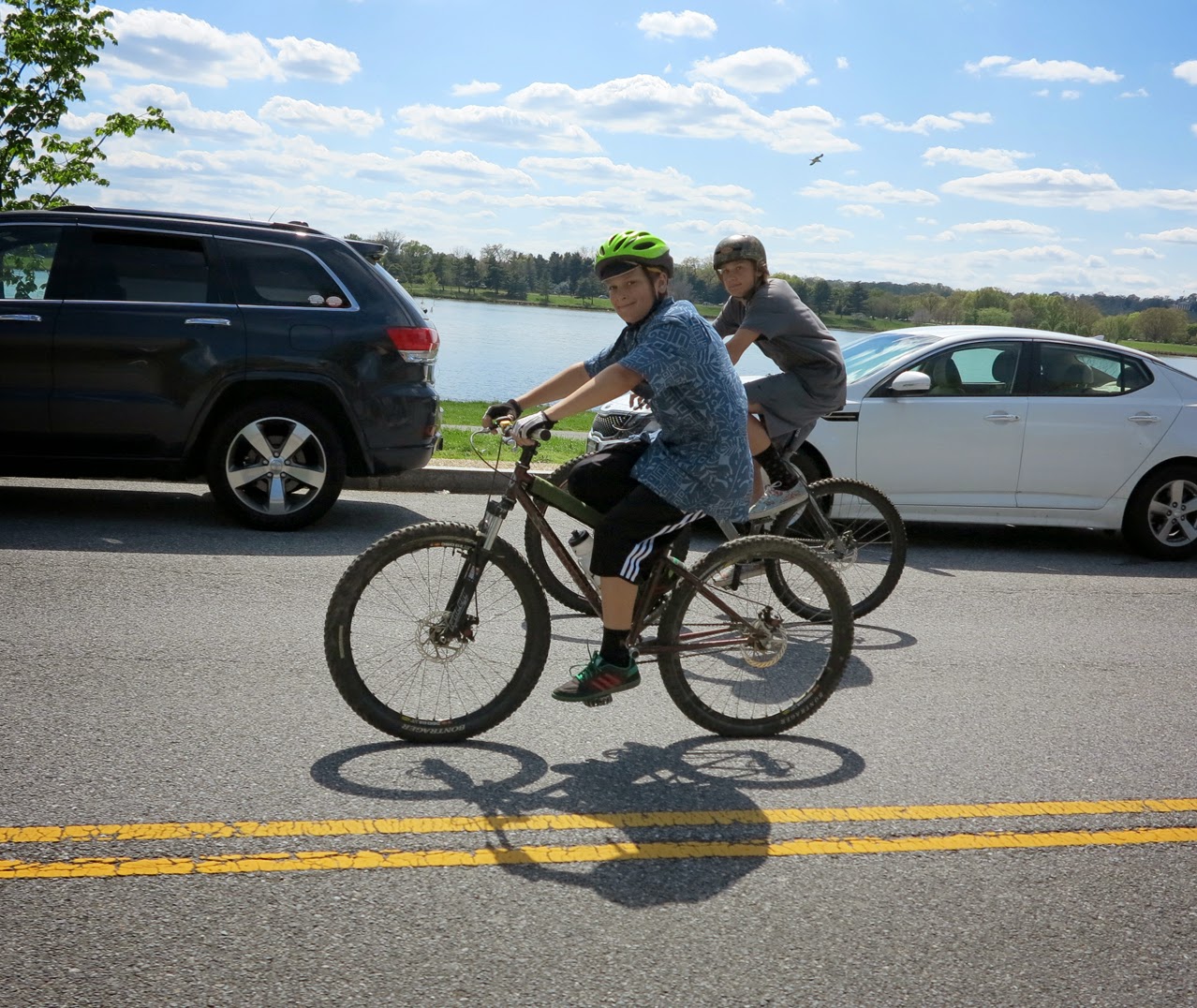 and young Grant
Grant was not looking to do a major epic
so... I promised it would be less than 20 miles
estimating that it would be closer to 15

as we rode I tried to bark orders to have the boys ride more safely
it irks me that I have to do this
but I want my boys to be safe and respectful of others
for the most part the kids are safe... a little wild at times... but safe 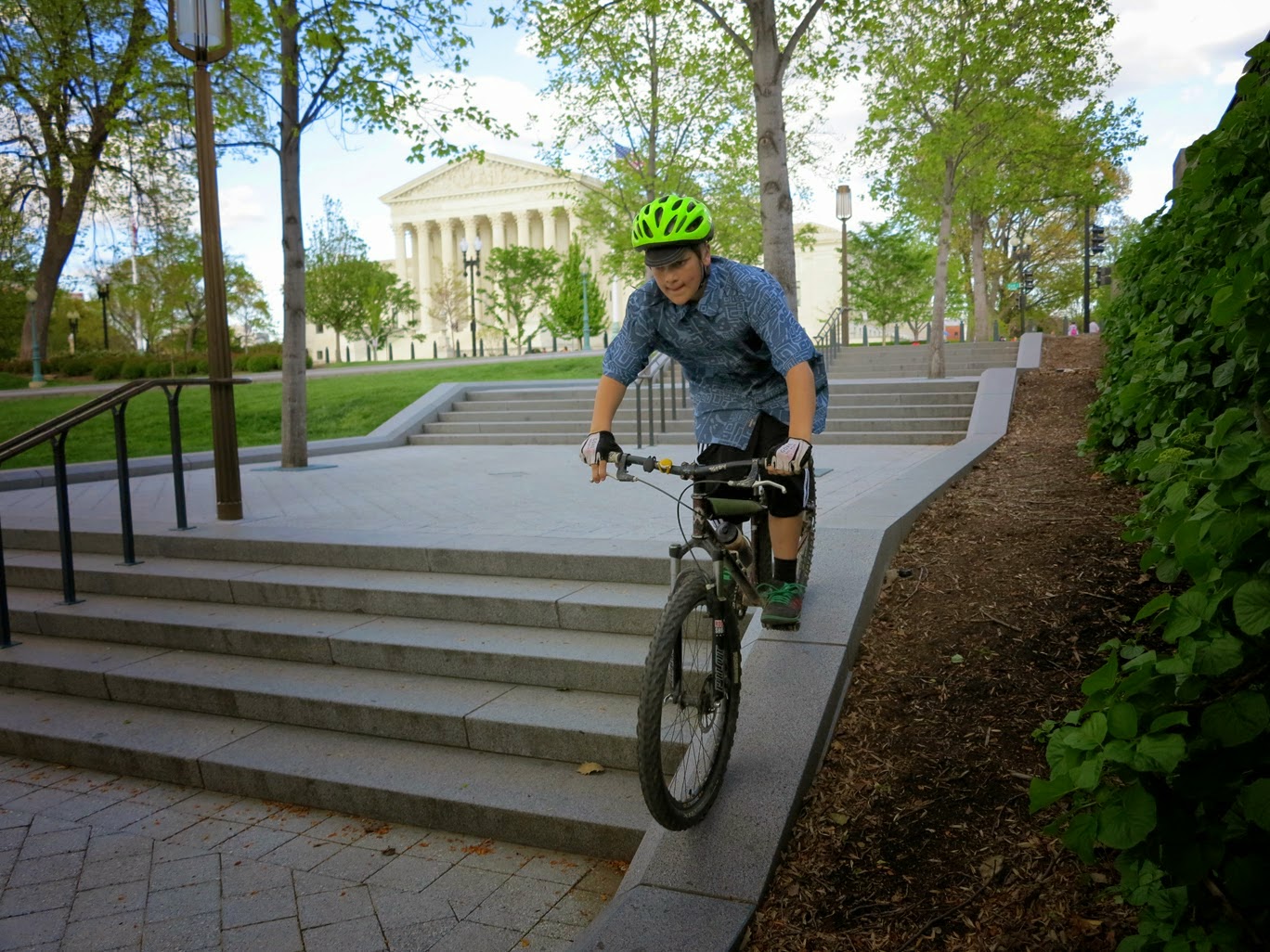 for the most part things went smoothly
we got some snarls and stares on the multiuse bike path
as my boys made what were safe and logical passes
but the oncoming runners mistook my young boys as being reckless
when actually... they are pretty safe in their efforts 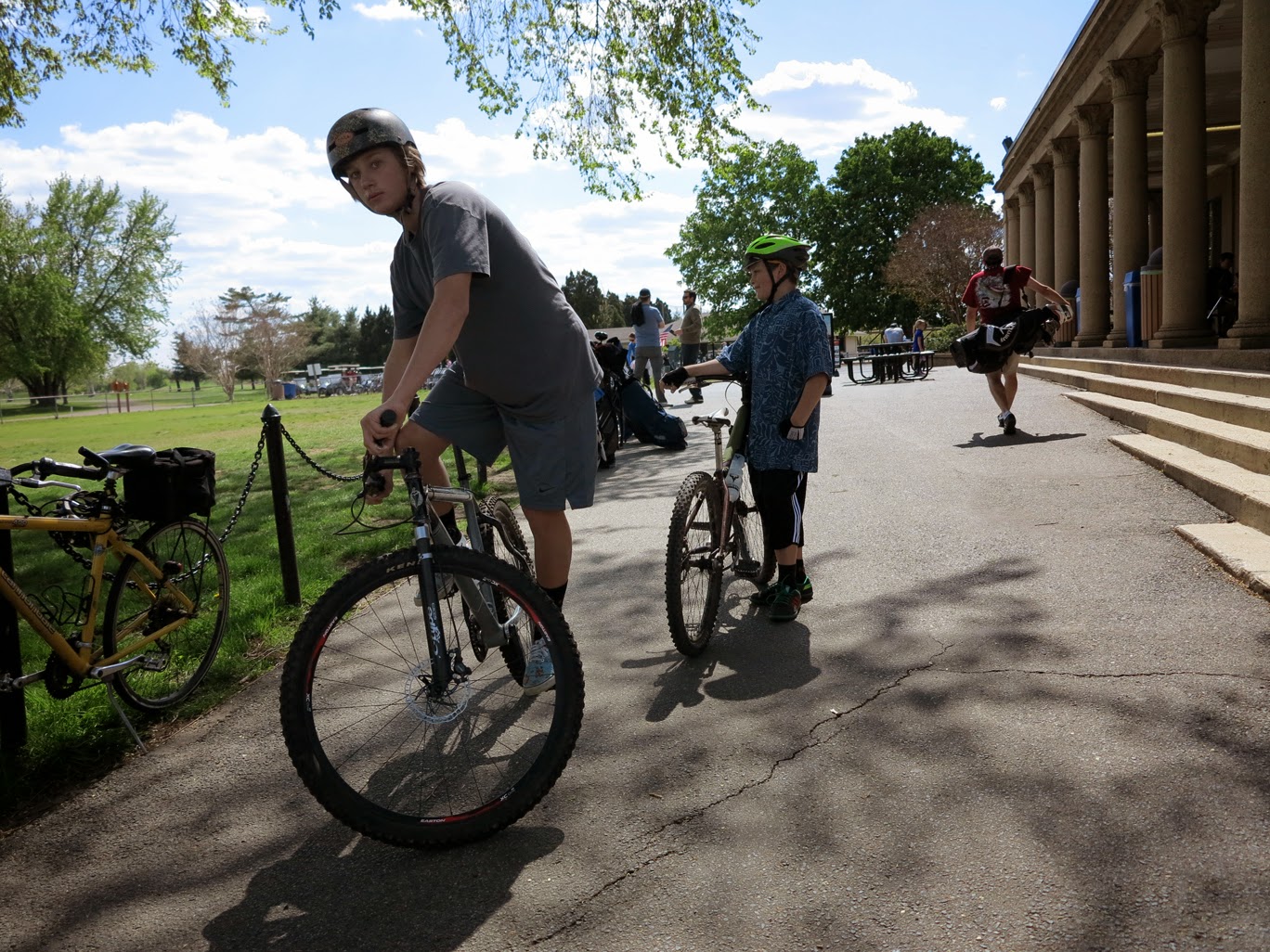 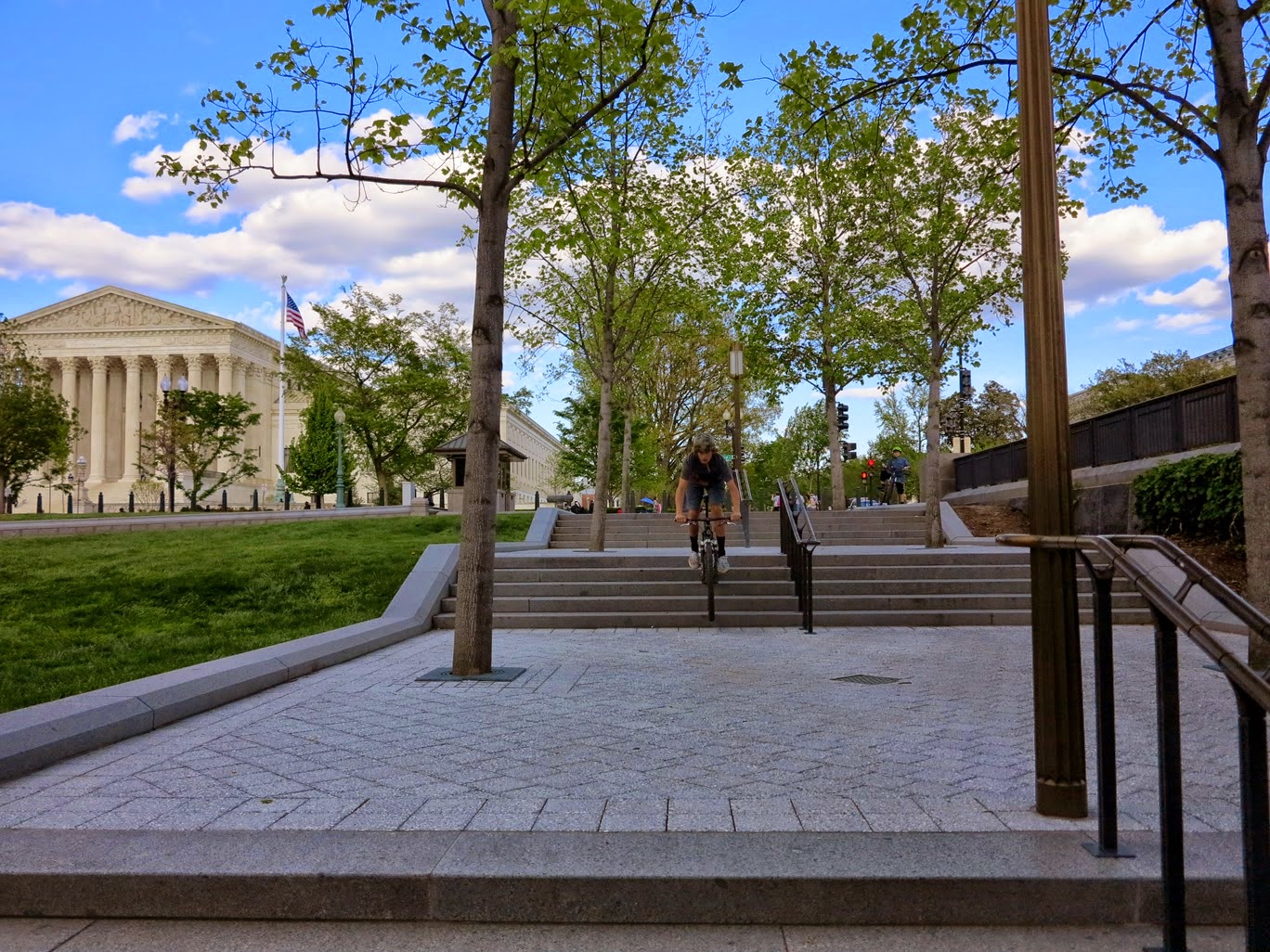 the timing out worked out well

it was mellow... yet I was feeling the pull of getting moving
"sit-still-itice" was kicking in
there was still much ground to cover
we had to get to two locations for Dean's school project
one of those locations being Lincoln Park on the other side of town
the other being Sumner House near National Geographic that would fit nicely into our route home 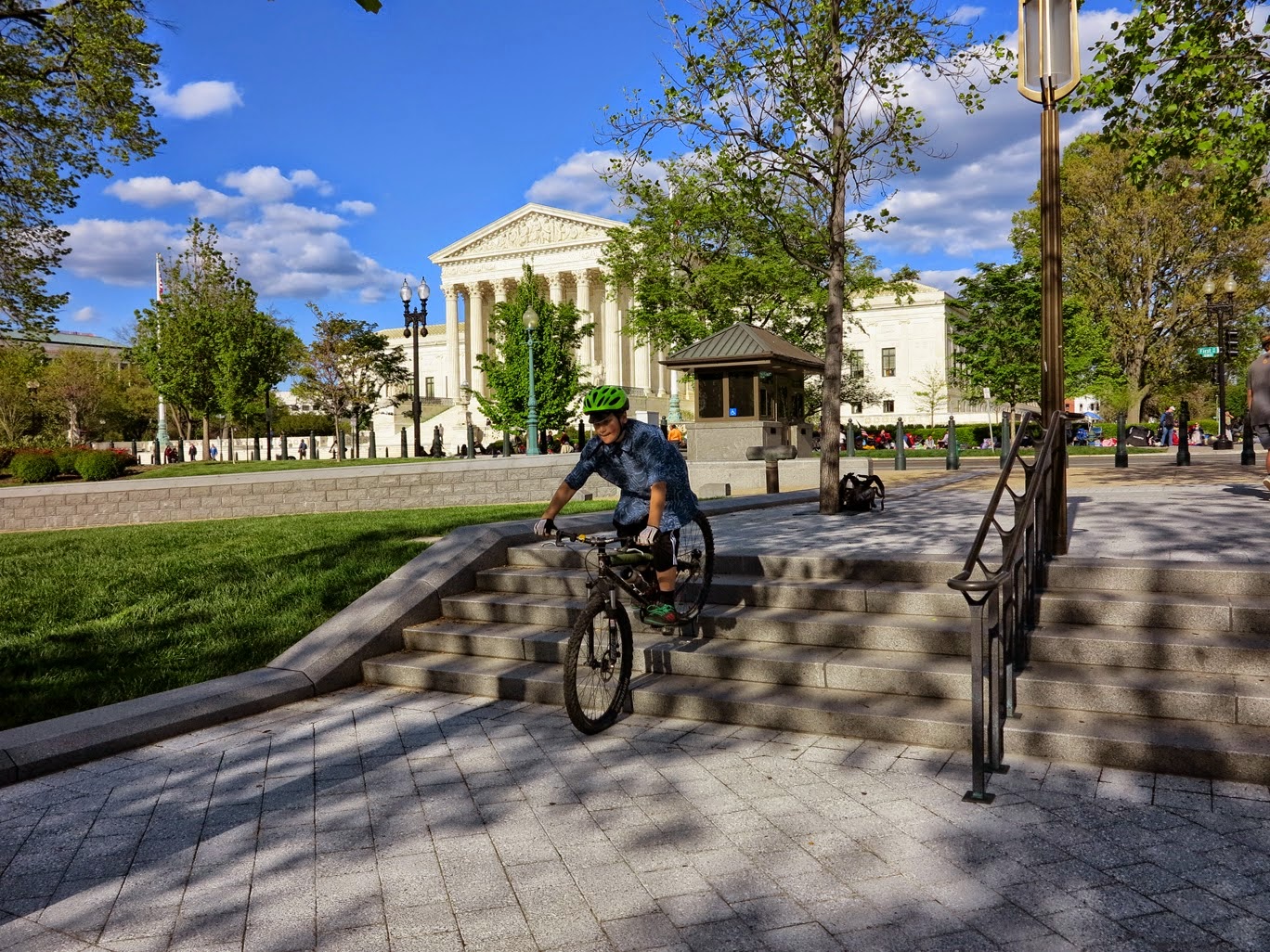 we meandered the city... trying to focus on car free routes
trying to stay either on bike paths... bike lanes... or streets that were not congested with cars
we short cute through various parks and looped the stairs and other obstacles

down East Capitol pointed to the US Capitol Building

as said... in our ride we cut through various parks
the boys rode the stairs and whatever other urban obstacles we could find
on the Capital grounds the boys found a great set of stairs and some very cool ramps
there was no tourist activity... I was not sure how the Hill Cops would respond
but we tried to be respectful... I told the boys to stay off the grass and ride with a care and concern

there had been a promise of KanJam at Malcolm X Park
but no... that was unlikely

Dean and I flipped a disc
my boys are pretty solid at frisbee for their age
as Dean and I threw the frisbee Grant entertained himself by trying to hit the frisbee out of the air with a stick
I was okay with this... because it kept him from petitioning me to leave

and of course
people just hanging out our late lunch had us less than hungry
but I knew the boys would have to eat
I knew I would have to eat
which meant I needed to head home and throw some food on the grill
so... we grabbed our bikes and started for home

BUT NO! GRANT HAD A FLAT
no issue... this is a solvable problem
I dug in my bag... I had some tools... a pump... and a variety of tubes
but no patch kit and no 26 inch tube
that is weird... I could swear I put a pack of Park clueless patches in my bag

this was easy enough to resolve
who is here? who would have a patch kit I could borrow?
I scanned the park... ah... Joseph

I approached Joseph Sage Raindancer who I had already caught up with
I knew that he traveled with all sorts of tools and whatnot in his pack
sure enough... he had a patch kit to borrow

we would not need to walk home... we would be riding home
a short ride can be a long walk
and we already had a long ride and neither of us felt like walking

in minutes I had Grant's wheel off his bike... flat repaired... then wheel back on the bike
then we headed off for home
Once home I cooked up some chicken fajitas on the grill
then after dinner I sat back with a laptop in my lap and looked at some images and reflected on my day
what a day 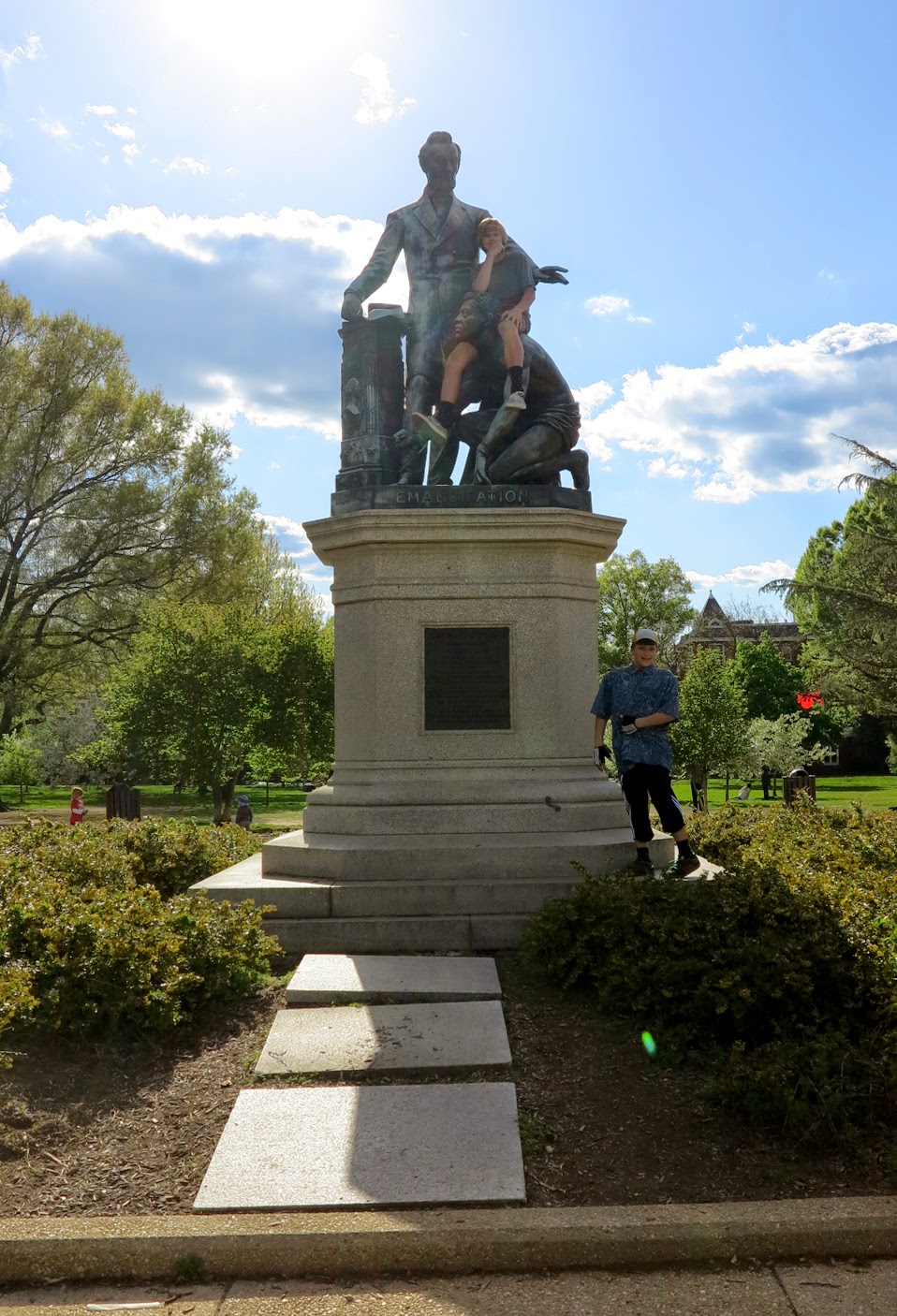 yes... it was a good day
but a day not without its issues
just as there was the issue with the double parked car and the door opening in front of us
there were other moments

while on the sidewalk we moved slow as we tried to pass the herd of tourists taking up the whole sidewalk walking in an ameboid mass 7-9 people wide
we moved slowly and I gave a gentle chant of "on  your left... on your left" as we passed
when  a man started yelling and cussing at me to get off the sidewalk and onto the road

in short... there are laws
although it is against the law to ride your bicycle on the sidewalk
this is a ride with an 11 and 13 year old boy
this law does not apply to them 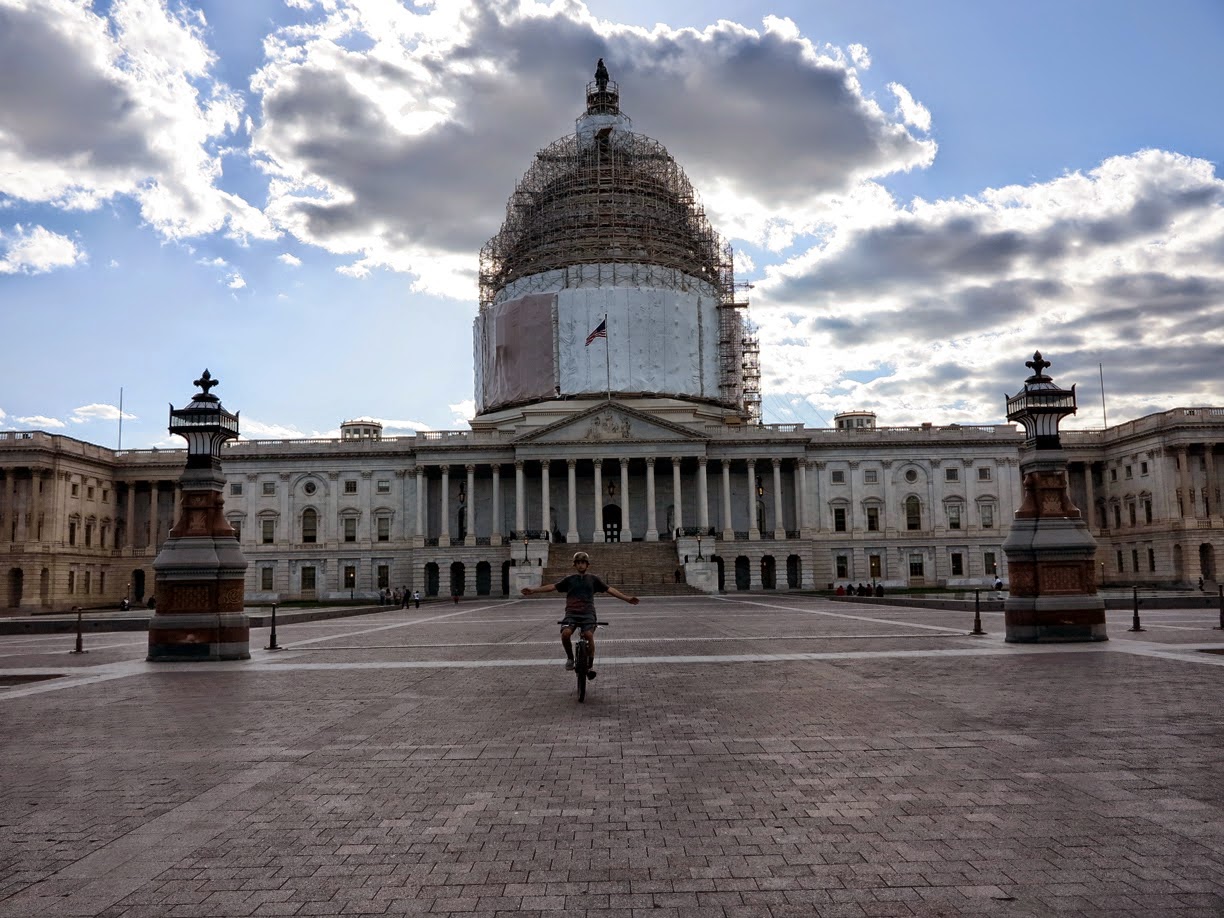 back in the '80's there was that "die yuppie scum" saying
I think we need a revision of that
something for these times
people suck
they are either idiots or assholes
not everyone... but plenty of them
luckily I interact with a tribe of people who are more evolved
these people make living on this planet livable

I think Strava had us for just under 19 miles