ah... last minute I learned that the Salad Days: A Decade of Punk In Washington DC was playing at the Mount Pleasant Library 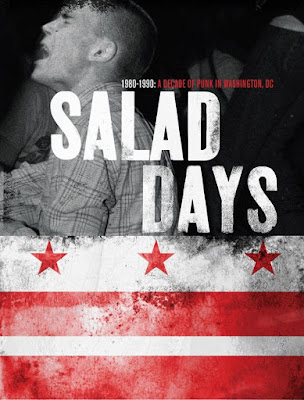 yesterday afternoon I saw that the Salad Days documentary would be having a screening at the Mount Pleasant Library
so... I did not leave work as early as I hoped
but I was still able to sneak in a ride
got on the bike and did a quick hour hammer on the road bike in Rock Creek Park
felt pretty spry... the beauty of the fall colors reflecting on the dark waters of the creek may not have inspired me but it certainly entertained me

the ride was shorter than I planned which allowed for me to walk the dog and then shower before heading to the screening of this film
but first... out of the shower and I have a few text messages on my phone
piss... shit... f....k!

oh man... leaving late will have me arriving late
Rock Creek Parkway late in Rush Hour can be a parking lot

endured the traffic because there is\was no choice
grabbed the boys
they were not that frustrated with my being late
my being late had Rory miss piano... he was thankful of that

I walked in late to the screening... which was fine... I have seen the film before and was planning on purchasing a copy
enjoyed the film
enjoyed the memories

it would be cool to see a film about "the scene"
someone asked about skinheads
Scott told an amusing story about a Skinhead kicking over some Japanese motorcycles
it was funny... but brought up the humor of our suburban punks and skins adopting some of the ideology of punks and skins in England

sure... it is a wonderful film
I did buy a copy
I recommend watching it
great documentary... he tells the story well
but the story can still be told from an alternate perspective