the only real way to write a decent race report is to immediately start telling the tale after it happens
then edit and re-edit in the days to follow
editing is not really my thing
and well...
not having a time machine... I will have to try to just start typing several weeks after the fact
who knows what details if any will come to surface

The DC Dead City Alleycat has a history of being one of the better attended DC Alleycats...
the event is normally well attended by racers and friends ALWAYS ending in an Epic After Party, but not this year... Covid has different plans for people

so... a race that is normally late afternoon into the evening was hosted in the day... 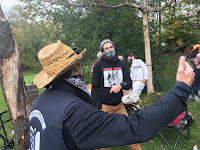 the race was scheduled for Halloween Day 2020
Halloween Day... not Halloween Evening or Night... but in the day... early enough for people to rush home after the race to hand out candy to the little ghouls and goblins

I toyed with the idea of a costume... but really... I have nothing available... or should I say nothing new... I still have my cheerleaders costume... and my private school girl skirt... and a few other options
but last year's Jedi costume was difficult to race with... cumbersome and a pain in the ass... which has me not so focused on a costume... so not exactly festive... but racing without a costume would be better than not racing at all

my All City Cosmic Stallion was pretty much ready to go
race ready? maybe\maybe not... rideable!
HELL YES! READY TO RIDE\RACE!

the night prior I had slapped a tube into the rear because the tubeless was suffering some tire pressure issues
then, other than lube on the chain and air in the tires there was not much the bike needed other than a rider pushing the pedals

Saturday afternoon arrived fast
I woke up slow and took a casual morning hike in the woods with the dog
back at the house I found myself cooking lunch and gathering gear in a slight panic... it was nearing 1 PM!

it all came together...
in a matter of time my body was fueled with eggs and bacon and my pack was filled with some dry clothes for post race comfort, tube/pump/multi tool just in case, jacket incase the temperature dropped, and some race fuel
the lock was left at home as I felt it would not be needed 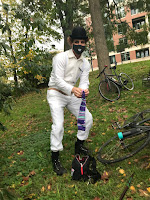 with Strava documenting my ride I headed downtown to the P Street Beach anxious about the race in front of me...

Alleycats are a big question mark... the format varies race to race... but in some respect it will always reflect the day of a messenger going from location to location around the city
yes there is the Manifest... but the racer chooses the route which will determine the distance... the duration... etc.

It is also never clear who will be racing... there is no pre-reg on BikeReg.com...
it is a just show up and race at your own risk sort of event
open streets... very Pirate... arrrgh!

So, without much effort and not much of a sweat I arrived at the race start location
people were gathered on the side of the hill not far from 23rd Street
I was as excited to see many people in costume and lots of people wearing masks of the non Halloween variety
Covid... Fucking Covid... I rolled up with my mask already on my face 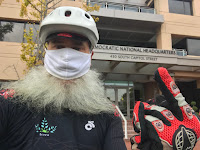 upon arrival I took a measure of who was there...

a good showing... some key players present...
AZ\Prosser\Biggs\Jordon\Bruce and others
then the wild cards... new faces... kids... punk kids!
and some fast new faces as well!

it was nice to see people... many of which I had not seen since the start of the Pandemic

it felt good to mix and mingle... but really... I was anxious for the race to start

DannyK... long time messenger... once a boy... now a man... is hosting this race
DannyK has been dominant in the local Alleycat Scene in the last few years...
today I do not have to worry about racing against him... I just need to worry about what sort of manifest he has created


Danny on the Gwadzilla Page
https://gwadzilla.blogspot.com/search?q=danny


the start unfolded in the standard fashion...
last minute manifests being printed at the local Kinkos and waiting for one or two late arriving racers who promised they were on their way 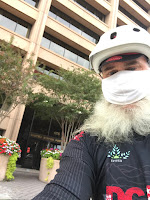 but really... I do not think we were too far off from the slated start time of 2PM

normally I would have my camera to occupy my mind while waiting for the start
but, currently I am between cameras with only the iPhone to snap some shots

no worries...  Kevin Dillard and Paul Lagoy were both there shooting shots in tandem
I felt that there would be some solid documentation
which allowed me to focus more on riding\racing that playing documentarian

that said... here are some links to my Instagram shots

Here are some Kevin Dillard shots of me that I threw on Instagram
https://www.instagram.com/p/CHNigVeBKDq/

and then...
three sets of shots on Instagram by me...
arrow through to see more than the first photo 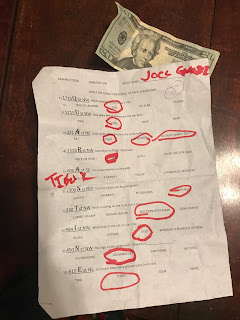 would I ride solo? would I chase someone who I believed might be the winner?

no need to plan that now... allegiances are normally built as the race develops
these things often happen organically (if at all)

a quick glance at the manifest and I planned my route loosely... others marked their manifest with an order of their intended destination
in my mind 2300 N Street NW seemed like my best first stop... I think the masses went to 2123 R Street First... and then hit 2300 N on the return just before ending at "the beach"

it was all very exciting... I was just stoked for the race to start and for the games to begin

I left off from the start on my own...
no one chasing me...
me not chasing anyone...
nearly everyone starting off in a different direction than myself...

as per usual... I was slow going through the Check Points...
the winners are fast and fluid
In and Out like a teenage boy on Prom Night
but not me... slow like molasses
often searching for my glasses 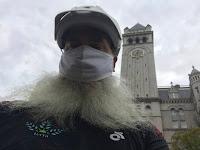 too much time at 2300 N... looping around the office building I did not see anything remotely Halloween... not on the glass doors... not in the lobby... not around back... I failed to see NOTHING as a multiple choice option... other racers who must have already been to another check point were arriving at what was my first Check Point along side of me... hmmm... had to step of the pace... had to find a rhythm... had to get in the game...

Alleycats are a RUSH! in the words of Danny Glover in Lethal Weapon... I am too old for that Shit! 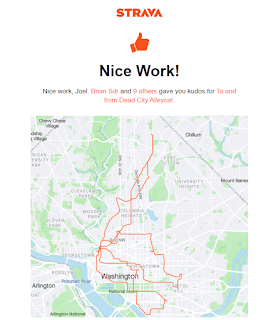 the Strava map includes my ride to and from the P Street Beach Start and Finish
but gives a good representation of the race route
there were two manifests... which created two loops

as this was the Dead City Alleycat... the theme of Manifest One was Halloween
the 10 Checkpoints were addresses that had Halloween Displays in the windows or in the yard
to prove that we had gone to the Check Point... we would have to answer the question based on the question and the seasonal display

after the 2300 N debacle I tried to be deliberate in my actions...
I felt my ordering of my manifest was good and my trajectory was solid...
there were times when I could see other racers just ahead or at other times on the streets parallel as we crossed through intersections

I am not sure... my first manifest was compete... but there is a number 8 circled on the completed manifest... which means I may have gotten only 8/10 on that manifest
just because I went there... does not mean I got the points...
it is more than going there... it is about going there and getting the correct answer
in fact... you could guess the right answer and get the points
no need to go there if you are clairvoyant

the second manifest was a short manifest... 4 STOPS... this time each racer would have to take a Selfie proving that they went to the location
no crystal ball for the win here
no... there had to be evidence that you went to this location
Evidence by Camera Phone

again... the Check Point destinations were not in order... so there was a quick mental debate on the loop to knock out this second manifest

my route would take me to MLK Library, Trump Hotel, Postal HQ at L'Enfant, and then the DNC on South Capital
then a long slog back to base... I mean Start\Finish.

I feel that I created a logical order... but I think that my trajectory from L'Enfant to the DNC was flawed
rather than backtrack to Independence Ave... I took Maine Avenue to M and then South Capital... Independence would have been more direct

then wasted some time trying to find the DNC... South Capital?
I thought the DNC was 50 Ivy Street!
I knew where it was... I was just spacing out... but more time wasted... longer than need be path to get there... then got a little lost\confused
time lost
most definitely that would have an effect upon my finish and my finishing order 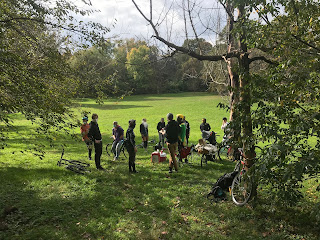 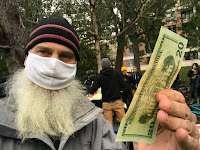 when racing... always race for first
or else you are not racing
even if first is not an option
you will not put in your best effort if you do not race for first... that is the only way to achieve your personal best

well... when I rolled into the finish at P Street Beach there were already a handful of finishers
all I could hope for was a better manifest than the other finishers in front of me
maybe they finished without completing their manifest
maybe the botched some of the questions

we hung out as racers rolled in
Bruce pulled out a frisbee and we tossed it around for a bit
but the 12 pack of PBR seemed like a much needed recovery drink
so... I stepped away from the disc game and I sipped a beer and made small talk
trying to mask up when I was not sipping

racers rolled up...
we waited for the stragglers...
DannyK scored the manifests...
and then we gathered for the podium

the Top Three was tough to crack
Jordon\Biggs\Bruce!
A TRIPLE THREAT!
I was happy to finish 5th... right behind Efron

Hung out for a few minutes more...
then pedaled home for a less than eventful Halloween
Covid basically canceled Halloween
I had a carved pumpkin and some candy

in an effort to social distance... I just put a bowl of candy on the sidewalk by the front gate
come morning half the candy remained in a pool of water after the evening rain

thanks DannyK for another great race! 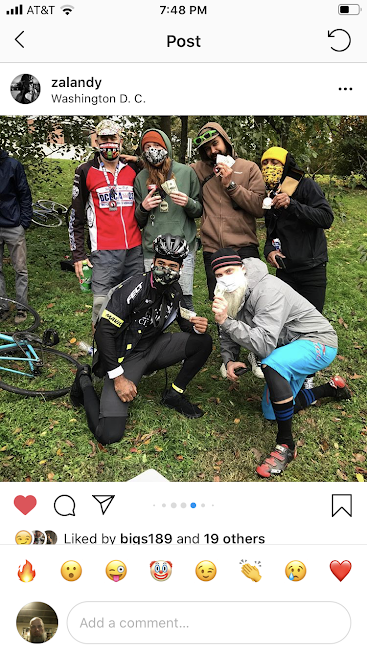 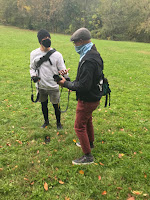