Columbia House... my dad refused me the option to send them a penny for 12 records... 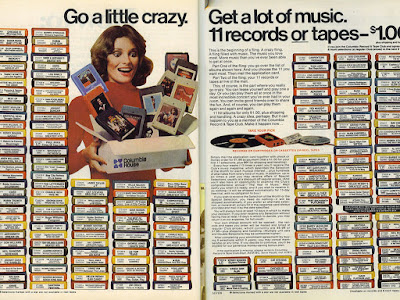 Columbia House
Who remembers Columbia House and that insert that was in every magazine and every Sunday paper?
12 Records or Tapes for a Penny!??!!
sounds too good to be true... perhaps it was
my father forbad me from this deal
as a small child I dreamed of this deal
I am not sure how many times my father saw me scanning the list for what albums I would request
only to be told that it was a scam...
but was it a scam?
as a teen I listened to all sorts of records
considered myself a "record collector"
when I left off for college... Columbia House was a freedom I was finally allowed
Columbia House along with piercing both my ears and dyeing my hair
but I did not get records... I got CDs
was it a scam?
not really... it was what it was... a business transaction
big win up front... then had to deal with the single record each month
a bit of a hassle
but really...
Columbia House gave me an opportunity to own and listen to so much music I would not have been able to experience on that level without owning the albums themselves
Columbia House was the perfect place to get greatest hits albums...
Steve Miller Band
Santana
the list goes on...
REM... U2... The Cure
so much worth listening to... but so much I would not have picked up had I gone record shopping
The Cure: Standing on the Beach
without Columbia House I would have maintained my ignorant dislike for the Cure
the same goes for Depeche Mode
bands that I knew a song or two from were introduced to a greater level
sure...
I need up with some CDs of music I did not want and had to pay 14 bucks for a 10 dollar record
but really... it was worth it
Columbia House was part of my youth... my yearning... and then my numerous joining and quitting only to join again at the next group house address
https://www.stereogum.com/1823177/columbia-house-is-finally-going-out-of-business/news/
https://www.businessinsider.com/columbia-house-bmg-music-profit-money-business-model-2018-7
https://www.npr.org/sections/thetwo-way/2015/08/11/431547925/8-cds-for-a-penny-company-files-for-bankruptcy