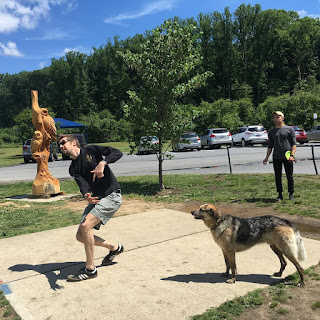 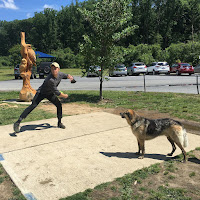 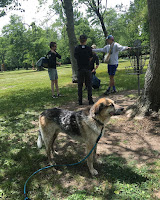 well...  the weekend approached faster than expected
I had thought that I might host an Alleycat
I did not present the idea to the DC Bike Messenger Association DCBMA
and then...
that notion passed 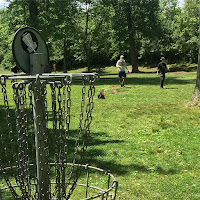 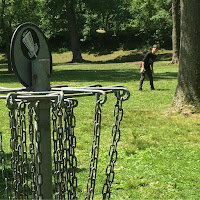 before the weekend started I got a text from Bruce
Bruce is a long time DC Messenger
Bruce has a love for many things
Disc Golf is one of those things
Bruce
https://gwadzilla.blogspot.com/search?q=bruce
Bruce sent out the invite to meet up for some golf on Memorial Day
10 am meet up Calvert Park Road Disc Golf Course in College Park
this course roughly a half hour bicycle ride from my house
but I would drive so I could bring my dog
Didg is a good dog and can hang out while we play a few holes of golf 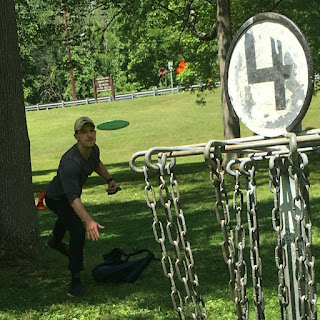 so... normally I play disc golf with an Ultimate Frisbee
and well... I have a long history of doing pretty okay with a standard disc
sort of like riding a single speed with someone on a full suspension bike
but on this day I decided to try the golf disc 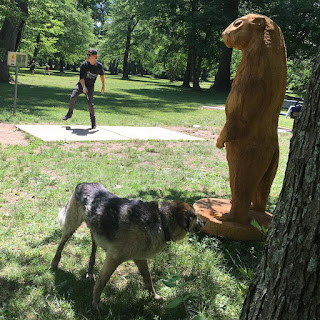 my old friend Peter Wilborn have a long history of playing frisbee together
for years Peter has tried to influence my golf game by gifting golf discs to me
and well...
the discs gather but I never use them
well... I decided that on this day I would try to use the golf disc
so...  I drove over to College Park with the dog
showed up a few minutes late... but pretty close to 10
all the players were already at the tee and ready to play
the score card would include - Bruce, DannyK, a kid named Joe, and Chris P aka Step Dad
the play would be unscored... accept by the individual for the individual
it would not be a contest or a competition
it would be a get together and a game
that said... we all threw our best and I kept a tally of my score
after a few warm up tosses... I figured I would try to learn how to throw a golf disc
to avoid some of the morning golf crowd we started on the back 9
teeing off I heard some advice from everyone on how to throw the disc
I spoke out and said... that I was gonna try something
I was not sure how the small weighted disc would respond to my angled shot
I threw the disc high and away... thinking it would drop towards the hole
it was amazing
the frisbee did exactly as I had intended
the small pink disc went far and away at an aggressive angle
then cut back and dropped towards the basket
then it happened!
the disc hit the ground just a few feet from the basket and skipped up
the angle was perfect for the skip rather than just dropping to the ground
the little pink disc skipped up and slammed into the chains of the basket
A HOLE IN ONE!
what a great way to start the day!
I should have packed my bag and gone home just then
as it would not get any better than that!
the day went on to be a struggle...
never quite getting the small firm golf discs to do what I intended them to do
my drives were decent in distance... but not any further than I think I could huck an Ultimate disc
and my PUTTING SUCKED!
I started strong... but could not finish strong...
shot Par for most of the day
with a few flubs... ended up 6 over par
not better than I would shoot with a standard disc
but... I figure once I learn how to use a golf disc I will get some consistency
and well...
as they say
"drive for show... putt for dough"
I need to work on my putting game!
good times!
Thanks Bruce for the Invite!
then went home and did an afternoon road ride
an Alleycat would have been nice
but Disc Golf with friends is not a bad option
Alleycat on the Gwadzilla Page
Alleycat 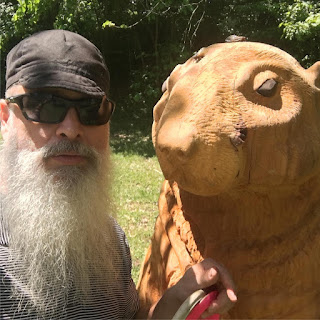