Vandal The Movie at the 14th Street Graffiti Museum 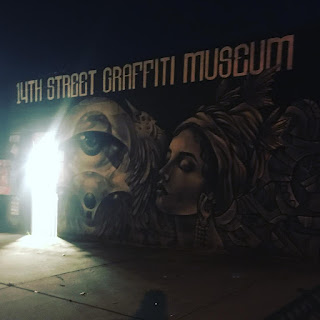 14th Street Graffiti Museum
at
14th Street and Crittenden Street NW
earlier this week I had coffee with a friend who is with the DC Mainstreet Program
at this meet up we talked about many things DC
we talked about some of our favorite small businesses
friends in common
businesses and business locations that were in question
and then... a conversation about a piece of art on Kennedy St NW that has been vandalized brought up the topic of Graffiti
we did not talk in detail about the death of Karon Hylton
but rather the piece of art on the corner that has been adopted by friends of Karon Hylton as a Memorial
a piece of art that is now more blight than art
we discussed what could/should be done
I had an idea... an idea I had shared with a mutual friend who works with this corrodor on one of the Main Street programs
as it turns out... my idea was right on point with their idea
perhaps this idea is obvious 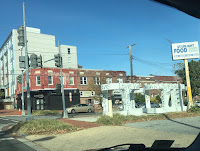 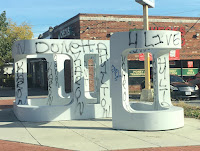 it was my notion that this art could carry a similar message
maybe not so Karon Centric
but about life... love... and Kennedy Street
it seemed to be that rather than these scribbles by "vandals"
there could be beautiful images by "street artists"
so... I had shared these ideas with this mutual friend along with the links to a few groups in DC that do legal Street Art\legal murals
DC Walls and Words Beats and Life Inc.
as it turns out... this idea is in discussion
but as with many things in life
things are easier said then done
getting an idea into action often takes time
especially with government involve
there will be red tape
there will be bureaucracy
and of course
there are a variety of citizens who also have opinions that need to be factored into the process
so... still in the talking stages
Uptown Main Street DC 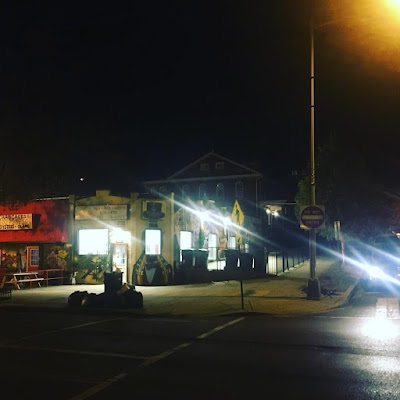 Dead City Alleycat Event Page on FACEBOOK
Miss Che Love
ASAD ULTRA WALKER
Dead City Sugar Skull T- Shirt Page hosted by ASAD
the conversation drifted from topic to topic
while on the topic of graffiti and street art there was mention of a movie
mention of a movie and then a museum I had never heard of
there was mention of a screening of a movie called, Vandal
which would be screening at the 14th Street Graffiti Museum
14th Street Graffiti Museum?
what and where is this? 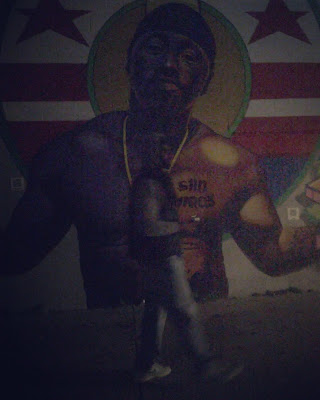 well... I had some errands to run and some tasks to accomplish after coffee
but there was interest
I penciled in attending this film on my evenings plans
which was easy to do
as I did not have anything to do 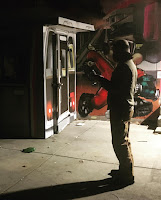 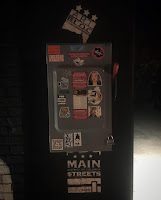 an afternoon bicycle ride on a fall day
a quick shower
a mental debate about bike or car
car winning as I am still healing from an Achilles injury
not sure if my leg had enough with the ride
a little more riding seemed like it could be too much
even though I am not far from this museum I had never heard about
the trip there and back would involve some rolling hills
my Achilles may have already had enough rolling hills on this day
so... I got in my old and tired Honda Element and drove the mile or so to 14th and Crittenden
as I approached the block I was amused
it was a quick trip down memory lane
I pass this block all the time when headed here or there
but it is rare that I do anything on this block
in fact...
I am not sure if I have been on this block since I was a teenager in the 80's
back then there was a massive thrift store
VALUE VILLAGE
and well...
the film would be airing in the dance studio above what was once Value Village
upon my arrival I was a tad confused as to where I needed to go
but... I saw a small cluster of people headed into a fenced in concrete patio area
I followed
as I followed I could see the words on the wall...
14th Street Graffiti Museum
I had stumbled upon a small group of film goers who were getting a quick museum tour after dark
we got the tour...
it was fast and informative
there are scan-able info card at many of the murals
the tour guide gushed about this artist from that place
and this and that... I was pretty much dim to the names other than Disco Dan
Cool Disco Dan
after the tour it was a quick stop at the nearest Bodega to get some snacks
then on into the theater
initially I had thought that Vandal was going to be a documentary
but alas no... it is a feature film...
no... this would be a "biopic"
took my seat... elevated my legs on another folding chair
made myself at home
pulled out some savory snacks
and took in the film
the film was fantastic...
now... I am not aware of the "who's who" of graffiti
but I think there are some heavy hitters and major players in this film
I just followed the story
the story follows a Miami street "crew"
Miami Graffiti Kings
MGK
giving a Hollywood presentation of the "beefs" between crews
the hassle with the cops
the results of being arrested and prosecuted for crimes related to graffiti and the conflicts between crews
the inner struggle of an artist
the protagonist struggles between the identity of a "graffiti artist" who tags
and the "street artist" who is commissioned to make art and sells art
it never really says the word "sell out"
but there is a subtext
it is more about something slightly different
as
Street Art and Bombing are similar but different
overlaps and intersections... but not entirely the same
and well... this is one of the struggles of our main character who fights to maintain his tagger\bomber status while struggling with all that negative about the world
while fighting the lure of potential fame and fortune
oh... and then.... then lastly...
it was a love story
after the film I assisted with putting away the folding chairs
then took a walk around the building to discover some of the art in the alleyway that surrounds the museum 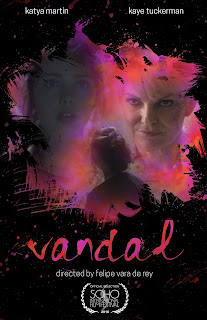 Vandal the Movie on FACEBOOK
Washington Post Article about the 14th Street Graffiti Museum
chase down this film...
it can be streamed in various platforms
Vandal the Movie Dot Com 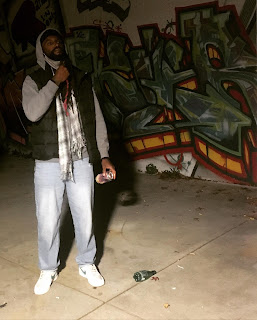